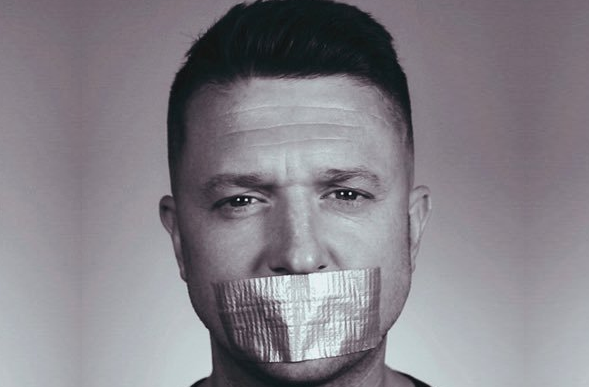 By now, some 350,000 people signed the petition on change.org to release journalist Tommy Robinson from a UK prison while his supporters urge all conservative voices to continue stating their displeasure over the one day trial and sentencing of this rebellious reporter who tried to inform the British public about Muslim rape gangs in his country.

Many on social media were quick to respond with imagery straight out of George Orwell’s 1984 as Mr Robinson had been arrested at the scene arbitrarily, was subsequently charged without an indictment, got convicted without a jury and was hastily sentenced without a trial.

There is growing disbelief about these events were it not for the fact that the UK reporting on this is being censored from public viewing.

The UK government issued a “no report order” on Mr Robinson’s case whilst conservative media sites like Breitbart UK had to pull their reports of the arrest on the grounds that they are operating from the British isles.

News stories posted online about Mr Robinson's arrest published in the Scottish Daily Record, Birmingham Live and The Mirror were all similarly pulled down. The British government did allow for a report to remain up at the Independent, as they labeled Mr Robinson as a far-right hooligan.

In the past day, unverifiable accounts have now stated that Mr Robinson was attacked by a Muslim gang whilst in prison and has now been transported to hospital.

Ironically, he was protesting on Friday over a Muslim criminal gang of 29 people that had groomed 100s of underage girls when the British government decided to arrest him for ‘disturbing the peace’.