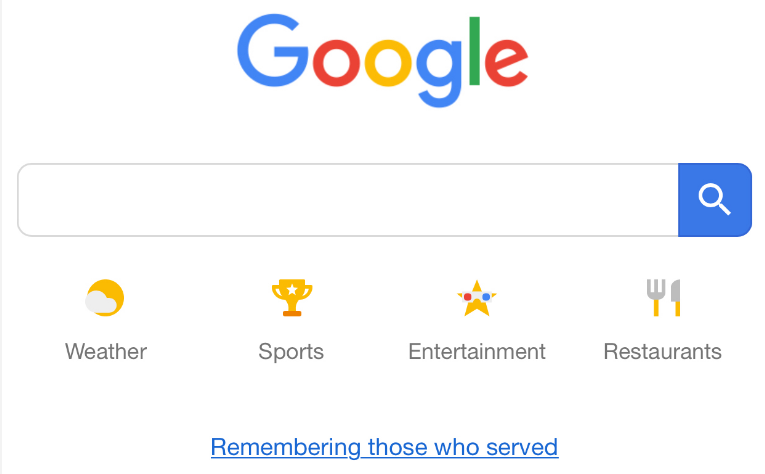 For example, here's how they celebrated Nepal Republic Day 2018:

This is the Doodle that the artists at Google designed for Mother's Day earlier this year:

Google's Doodles can't be embedded, but they all have some sort of animation within them so that the user can see a mini-movie sometimes, depending on the holiday. To see the Google archives of their Doodles, <a href="https://www.google.com/doodles"> click here</a> should do the trick.

Each year Americans are interested, in anticipation, on what the company will choose to do for Memorial Day, but are always disappointed to see that they never change the logo at all.

Instead, they put something small underneath the Google logo. Last year they placed a microscopic American flag with a little yellow ribbon on top of it.

If you weren't looking for it, you'd miss it. Even though the Google organization is biased towards the leftist politics, you'd think they would try and dig deep to find some sort of respect for the American soldier who gave his or her life for freedom. Surely, liberals can muster a bit of sympathy and respect for soldiers one day a year.

But alas… they can't.

This year wasn’t much different. They put a link underneath the Google logo:

They did put a lot of energy into celebrating Sam Selvon’s 95th Birthday.

Today we celebrate the 95th birthday of novelist, poet, and playwright, Sam Selvon. Born to humble beginnings in rural south Trinidad in 1923, his East Indian heritage and West Indian upbringing would greatly shape his future identity as a writer.

Selvon started writing during his spare time while working in the oilfields, serving in the Royal Naval Reserve, and writing for newspapers and literary magazines. In his early twenties, he wrote and published several short stories and poems in his native Trinidad. However, it was his move to England in 1950 which set the stage for his career to blossom.

Drawing from his personal experiences as an immigrant, Selvon published his pioneering novel “The Lonely Londoners” in 1956. In it, he gave the unique Caribbean creolized English, or "nation language," a narrative voice of its own on an international stage. “The Lonely Londoners” was later followed by two more London-based novels: “Moses Ascending” (1975) and “Moses Migrating” (1983), both of which continued the saga of Caribbean immigrants and their experiences in London.

Today’s Doodle by guest artist Jayesh Sivan depicts Selvon and other members of the Caribbean migrant community set against the backdrop of London, which served as the inspiration and setting for much of his works.

Google should ask itself, would it exist if not for those who sacrificed all for America?

Would the advances in technology have happened strictly in the civilian world? The same technology that resulted from military hardware that eventually enabled Google?

Would the co-founder of Google, Sergey Brin, a Russian immigrant, have even been born, or would his family have joined the millions of Russian civilians that perished in World War II?

Google should be celebrating American values and those who died to safeguard them.

Lexy, I am so glad that you point out this communist propaganda! They are shoving it right in our face. I am so sick of organizations like Google living off of America while they tell us how bad we are.

Way to go Lexy. This is one day when everyone should just give it a rest from selling (whatever) and try to give thanks to those who gave everything!

Such an important subject so in that respect Thanks for the article, that said, the mere mention of Google causes such anger at the fact that we have allowed them a past opportunity to make society so dependant on them that prayer is needed before my next comment-but comment I will—sigh…

Great read! So many mega companies like Google have lost what this Country stands for. You touched upon key points showing how out of touch Google has become.

Thank you for making people aware of Google’s bias. I expect nothing from this liberal company, so I am never disappointed by them. I try never to use google.

Google and all the other Marxist propagandist are a disgrace. Thank you for the article. Never want to miss yours.

Thank you for bringing this point to light in such a informative way.

As is obvious eirher put up or shut up! We can hit them where it hurts in the wallet thats about it dont use their search engine dont have anything to do with them thats all that can be done. Check companies associated or owned by them get a list out there thats the way to win the war!

Google made an ass of themselves on the Veterans Day Logo …. so small and lack of any artistic expression it's pathetic.

Nobody cares about the stupid veterans. It's not our fault that they were from a broke family who didn't save up a college fund, and they were uneducated. That's their problem, not ours. America is tired of hearing them whine and complain. To hell with them.

Google quit being my primary search engine years ago for privacy and security reasons.

I use DuckDuckGo, Startpage HTTPS and Dogpile. I only use Google as a last resort with TOR running thru Europe.