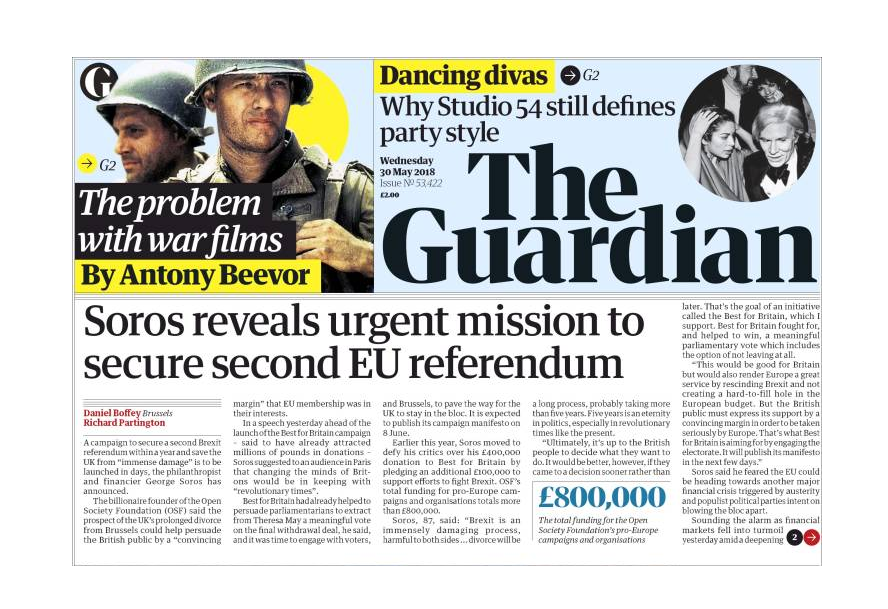 Mr. George Soros, the Hungarian-American philanthropist, and financier announced in Paris yesterday that he would be bankrolling via his Open Society Foundation, a pro-EU ‘Best for Britain’ campaign to change the minds of the British public and convince them that EU membership is in their best interests and that they can still reverse Brexit.

Mr. Soros stated: "Brexit is an immensely damaging process, harmful to both sides. Divorce will be a long process, probably taking more than five years," said the financier who called the period "an eternity in politics, especially in revolutionary times like the present".

"Ultimately, it's up to the British people to decide what they want to do. It would be better however if they came to a decision sooner rather than later. That's the goal of an initiative called the Best for Britain, which I support."

His campaign of Best for Britain, which was set-up immediately after the 2016 EU referendum which saw the British voters choose to leave the EU, has so far been able to lobby MPs in parliament to vote against the government's proposed EU Withdrawal Bill and introduce several amendments which were co-written by Mr Soros’ foundation, for example his demand for the UK to stay in the single market and the Customs Union and to have insurance from the Tory government that March 2019 is not the official exit date.

“Best for Britain fought for, and helped to win, a meaningful parliamentary vote which includes the option of not leaving at all.”

“This would be good for Britain but would also render Europe a great service by rescinding Brexit and not creating a hard-to-fill hole in the European budget. But the British public must express its support by a convincing margin in order to be taken seriously by Europe. That’s what the Best for Britain is aiming for by engaging the electorate. It will publish its manifesto in the next few days.”

“The economic case for remaining a member of the EU is strong, but it will take time for it to sink in. During that time the EU needs to transform itself into an association that countries like Britain would want to join, in order to strengthen the political case.”

Notice the apparent sarcasm of Mr. Soros stating that it is ultimately up to the British people to decide, but he is at the same time willing to pay in order to meddle a vote that was clearly settled two years ago.

As readers of the goldwater.com know, the backing of a second Brexit referendum is not the only thing on Mr. Soros’ mind. He is also bankrolling several liberal candidates in Texas and California for the upcoming elections.

Soros is a GD POS intent on destroying white countries with 'multiculturalism, open-borders' for every country BUT ISRAEL.

S0ros is the devil!! Why wont that miserable POS get on the clint0n hit list already! Rosanne should have kept up her anti S0ros twatter rant in the hopes that the clint0n apparatus would fear him spilling the beans. If successful he would meet his end in an unfortunate airplane crash.

Because of Soros, Roseanne got axed in the first place