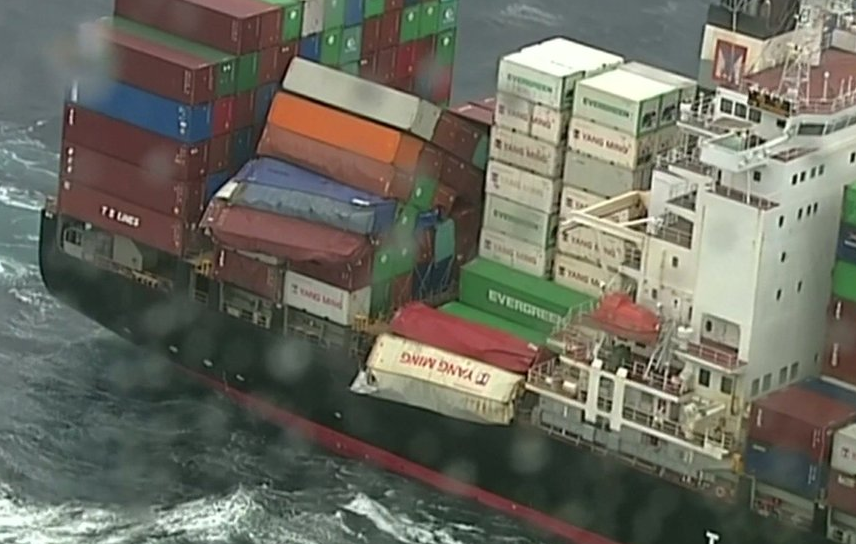 Authorities warned beachgoers and boat operators in New South Wales today after a Liberian cargo ship lost 83 containers in rough waters overnight. The ship, operated by the Chinese company Yang Ming Marine Transport could be seen still having several 40-foot containers hanging loosely from it, about to drop overboard. On top of the 83 containers that were lost, a further 30 were badly damaged.

Even though a spokesman for Yang Ming did confirm that “there is no security concern about the condition of the vessel,” the Australian coast guard was more worried about the containers that had not been located yet, which make for hazardous shipping lanes for the smaller boats.

Roads and Maritime Services executive director Mr Angus Mitchell explained: "They're 40-foot containers, they sit about a foot or two off the water … even in the best of conditions they're difficult to spot, but at night and in a swell, almost impossible."

Just north of Sydney, reports were coming in of nappies, surgical masks, and various sanitary products washing up on shore.

According to Mr Mitchell, his services were still awaiting a report from the Yang Ming Marine Transport corporation to define what was in all 83 containers so that police knows if there is anything hazardous to be on the lookout for.

Australians on social media were reacting frantically to their beaches being spoilt by the cargo ship. A Sydney twitter user wrote: "How dare they pollute our local waterways … whale migration too. Feel so sad a foreign vessel has such an impact on our environment."

"They should be made to collect all 83 containers."

Sh*t Happens… The video only shows the fallen containers still on the ship. No video of washing up on shore yet.

Play Sherlock Holmes for a sec.

IF this is the picture of the actual container ship some counting the empty spaces.

IF fully loaded there would be

Play Sherlock Holmes for a sec.

IF this is the picture of the actual container ship some counting the empty spaces.

IF fully loaded there would be