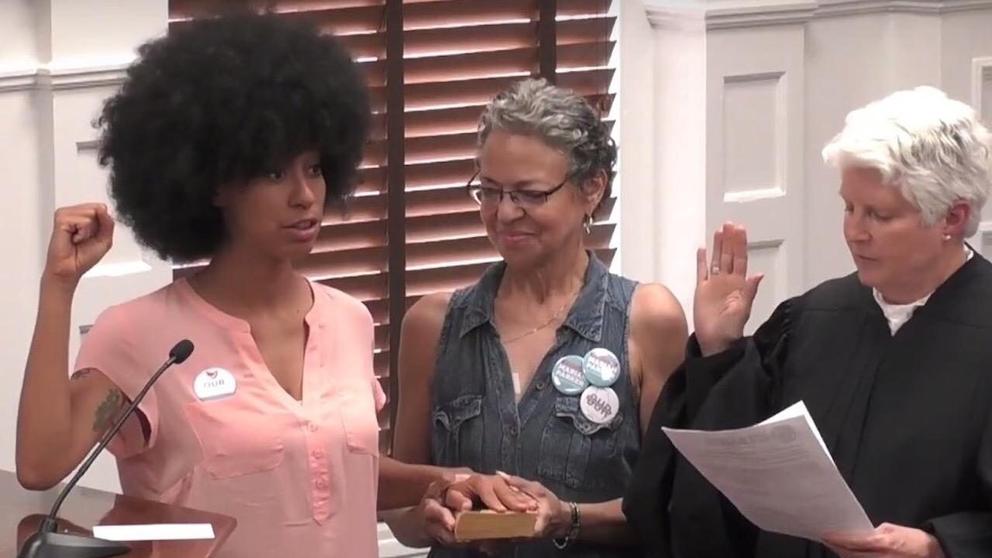 Mariah Parker was sworn in this week to represent District 2 on the Athens-Clarke County Commission and refused to take her oath of office on the Bible.

Mariah Parker, a Ph.D. student, and rapper who goes by the name Lingua Franca was sworn into office as Athens-Clarke County, Ga. Commissioner on June 5, 2018.

“They asked if I would like the Bible and I said no. My mother asked if there was a copy of the Constitution around. No,” Parker said. “I wanted Malcolm’s book. I think they saw it coming.”

‘On Monday, the 26-year-old University of Georgia doctoral student was sworn in as an Athens-Clarke County Commissioner. When she took her oath of office, she was didn't use a bible. On the steps of the Athens City Hall, Parker cocked her right fist in the air and place her left hand on a well-worn copy of “The Autobiography of Malcolm X,” held by her mother, Mattie Parker. Probate Judge Susan Tate swore her in as the District 2 commissioner.’

The swearing in process is to make a solemn declaration or affirmation by some sacred being or object, as a deity or the Bible, to bind oneself by oath.

We are to assume Mariah Parker believes Malcolm X is a “sacred” being. This is beyond ridiculous. If Parker doesn’t believe in God and our constitution, how can we trust she took the oath seriously at all?

“Having seen the transformation of someone who came through a difficult background to become vocal and push conversations on race in a radical way is powerful,” Parker said. “Then he shifted course and saw race through a different lens as he got older. And the fact that he was arguably killed for his politics. These are things that I want to embrace.”

Parker is getting her doctorate in language and literacy education. She said she only finished reading the autobiography about a year ago but was struck by the parallels.

She grew up poor in rural Kentucky, has overcome substance abuse and had struggled with mental health issues.

“I was very lucky to break away from some of the generational patterns, by going to college and getting out of the town,” said Parker. “But I struggled and I thought people only looked at me as having nothing to offer.”

Parker is a progressive, who describes herself as openly queer. Parker decided to run for office because she saw a need for vocal leadership.

Wow, people won’t have to work hard, have any ambition to excel at anything and they can stay high.

I hear Canada is legalizing Marijuana. Do they have room for these folks?