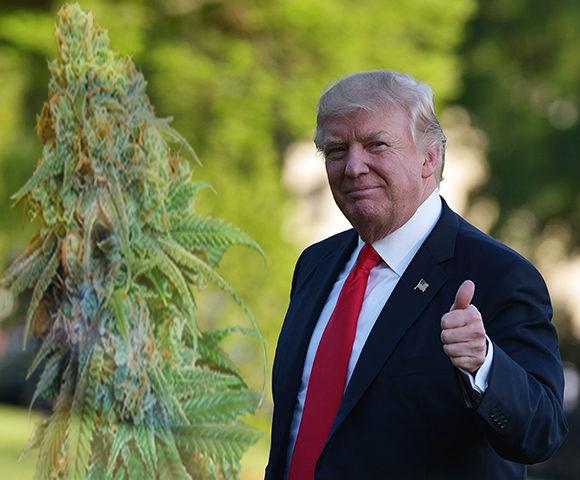 There are ongoing efforts amongst Republicans in the Senate to end the federal ban of marijuana, a long-debated and controversial plant, and now it appears President Trump is open to supporting Senator Cory Gardner (R-CO) as he pushes bipartisan legislation for ending the federal ban.

On Friday, just as President Trump was boarding Marine One to attend the G7 Summit, he was asked about his support for Senator Gardner’s new proposition that will push for decriminalization amongst states which voters have decided to legalize, despite a federal ban, on the plant for recreational and medicinal purposes.

“I support Senator Gardner,” President Trump said to reporters. “I know exactly what he’s doing. We’re looking at it. But I probably will end up supporting that, yes.”

Senator Gardner’s “State's Rights” bill is bipartisan, including support from countless Democrats, surprisingly, who have decided to work together to end the unnecessary federal ban with a bill that ensures each state has a right to determine the best approach to marijuana within its borders, with the “Strengthening the Tenth Amendment Through Entrusting States Act,” also known as the ‘‘STATES Act’’.

<a href="https://www.warren.senate.gov/imo/media/doc/2018.06.05%20-%20warren-gardner%20STATES%20Act.pdf">Click here to download the Strengthening the Tenth Amendment Through Entrusting States Act, also known as STATES Act. </a>

Democratic Senator Elizabeth Warren (D-MA) is co-sponsoring the bill with Gardner, making two unlikely opponents from each side of the aisle coming together to do the right thing for the American people.

"This is not a bill that forces legalization on any state that doesn't want it," Senator Warren said amidst a press conference with Senator Gardner. "We are trying to take care of business in Massachusetts, in Colorado. We are trying to respect the voters of our states that said this is how we want to do business around marijuana…and we just want the federal government to get out of the way and let them do it.”

Many Conservatives would agree with this statement as well, making marijuana one topic of unity for both parties.

The countless numbers of Americans who are behind bars imprisoned on either a misdemeanor or felony charges for marijuana possession are mind-boggling, as it is an all-natural plant, of which has numerous medicinal properties.

Many traditionalists have suggested that marijuana could lead to harming or degradation of society and values, albeit there is currently far more serious drug wars in the United States of America, including the heroin and opioid epidemic, which has killed more Americans annually than that who have died at the hands of firearms.

The bill itself does not seek to “legalize” marijuana, but instead proposes an amendment to the Controlled Substances Act, which will offer a form of protection to people who choose to smoke, ingest, or take various forms of marijuana, in compliance with their own state-mandated laws and regulations.

The bill also states that two-party marijuana transactions are no longer considered as drug trafficking, and it will remove industrial hemp from the list of substances prohibited under the CSA.

"The federal government is closing its eyes and plugging its ears while 46 states have acted," Gardner said in a statement. "The bipartisan, commonsense bill ensures the federal government will respect the will of the voters - whether that is legalization or prohibition - and not interfere in any states' legal marijuana industry."

The current federal ban on marijuana has been in place for a half-century, for any use including medicinal purposes, with the passage of the Controlled Substances Act (CSA) of 1970.

Multiple efforts to reschedule cannabis under the CSA have failed, and the United States of America's Supreme Court has ruled in United States v. Oakland Cannabis Buyers' Cooperative and Gonzales v. Raich that the federal government has a right to regulate and criminalize cannabis, even for medical purposes.

Despite this, states and other jurisdictions have continued to implement policies that conflict with federal law, beginning with the passage of California's Proposition 215 in 1996. By 2016 a majority of states had legalized medical cannabis, and in 2012 the first states legalized recreational use, which has since followed in several states including Colorado, where Senator Gardner is from.

President Trump has previously promised the GOP he would protect individual State's rights on marijuana and agree to sign this bill no way changes that promise.

Many states, however, such as Alabama, have severe punishments in place for possession of marijuana, where tiny amounts can send an American to prison for a year.

This could help to promote changes in those unnecessarily strict laws, whereas marijuana use is a relatively victimless crime, outside of rare cases.

For the most part, the American public overwhelmingly supports the decriminalization of recreational marijuana, and nearly nine-out-of-ten Americans support medicinal marijuana treatments, with terminally-ill patients swearing by its ability to help them not only cope but assist in the treatment of cancer and pain-management patients.

By signing this bill President Trump is sure to have newfound support among millennial and Generation Z voters, as well as casual smokers of the plant that many estimates to be in the tens of millions of Americans.

We may see the inevitable full legalization of marijuana in America within our lifetimes if the American people continue to support a measure.

For now, once the bill is signed, it will be up to each state as per how to respond to marijuana use, possession, and sales.