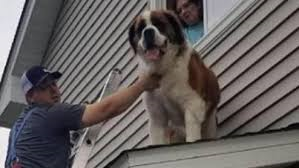 Saint Bernard dogs generally have the good reputation for saving people, living up to the man’s best friend tag for humans. But it’s a different story in Minnesota when one large canine needed rescuing, and humans, including law enforcement, had to rise to the occasion to save the dog in dramatic fashion on Friday.

Whiskey, who weighs more than 100 pounds, somehow found his way onto an overhang outside a second-story window, above the front door, in a home located in suburban Minneapolis. Renee Roth was watching after the dog for her son and tried to do the rescuing herself. She was leaning out the window clutching a leash to get the dog back inside the house.

Roth’s efforts proved futile. Police officers also got into the action and tried to coax the dog back into the house with a treat but were also unsuccessful.

That’s when Spring Lake firefighters had to step in to save Whiskey from falling and potentially injuring himself.

Fire Department Lt. Anthony Scavo admitted to local media that he was initially dumbfounded by what he saw. He said: “Wow. Whiskey had pushed the screen out of the open window and jumped out onto the roof.”

Firefighter Dacid O’Keeffe then went to work by climbing a 16-foot ladder and positioning himself behind Whiskey, while Scavo and Duty chief Jeremiah Anderson placed themselves just inside the window to help move back the dog to safety.

The firefighters managed to move Whiskey back into the house without incident, and once there the smart and “unremorseful” dog ate with gusto the treat he could not be bribed with earlier.

All in a day’s playtime for Whiskey, and all in a day’s work for the gallant and caring firefighters and police officers.

<p class="body-line ltr rquote">Am FLORIDA RANKIN of TEXAS USA i was so traumatize staying all alone with no body to stay by me and to be with me, but i was so lucky one certain day to meet this powerful spell caster Dr.ZUKU after telling him about my situation he did everything humanly possible to see that my lover come back to me,indeed after casting the spell my Ex Boyfriend came back to me less than 24 hours my Ex Boyfriend came back begging me that he will never leave me again,3 months later we got engaged and married,if you are having this same situation just contact Dr.ZUKU on his email: [email protected] thanks very much sir for restoring my ex Boyfriend back to me,his cell phone is:+16177296273</p>