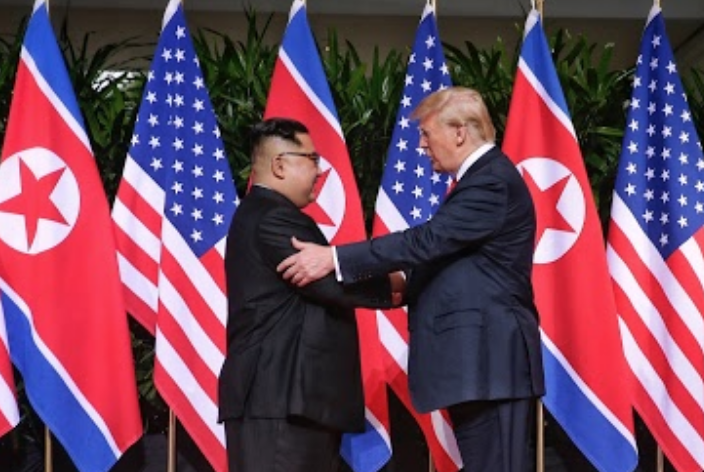 The scenario used to be unimaginable, but President Donald Trump made it happen- he finally met with once isolated North Korean leader Kim Jong-un in Singapore today as the two men grasped hands in front of a line of American and North Korean flags. Such extra ordinary moment offered an indelible image before a captivated world that’s watching the historic event unfold.

After the momentous handshake, the two leaders posed for photographs, both stern-faced, before making their way in a meeting room to speak briefly with the members of the media.

Trump later told their audience while the two leaders were seated and before incessantly flashing cameras that he predicts having a “terrific relationship” with Kim. The American president also said “It’s my honor” to be meeting with Kim.

Kim for his part said with the aid of a translator that “it was not easy” for the unprecedented meeting to happen, but that the two sides overcame obstacles. Trump responded and said: “That’s true.”

It is believed to be the first time an American president has come face-to-face, shook hands and will talk with a North Korean leader.

Trump wore a suit and a red tie while Kim was dressed in his customary all-black outfit.

Trump was also seen briefly grasping Kim’s shoulder during their handshake that lasted for several seconds.

The historic first meeting- out of several ones planned for the day- between the two leaders lasted for a good 45 minutes. Trump said after the meeting that their relationship was “very, very good.”

The Trump-Kim summit called for a sit-down meeting between the two leaders where only translators will join them in the room. After that, Trump and Kim are expected to participate in a larger bilateral dialogue to be joined also by White House chief of staff John Kelly, national security adviser John Bolton and North Korean officials.

Awesome president we got right there folks.

The Socialist Liberals and the DC Swamper's are peeing all over themselves.

Once again we have NON-SWAMP Maverick President, that has gone toe to toe with a Communist Dictator, just like Reagan did back in the 80's, and he has won out.

In fact the Liberals/Socialist accused Reagan and Trump basically of all the same things wanting to starting WWIII, being crazy, unstable … blah, blah blah….

It is like the Socialist Liberals would rather see North Korea continue to rule its country like a 2 class system (Royals/Elitists vs Worker Slaves) than a capitalist / conservative succeed in any degree.

It sure is not helping the liberals OPEN BORDERS agenda and the socialists 1 Ruler Government Planet Earth.

But all that aside North Korea has a documented history of saying one thing to too many Presidents in the past, and doing the direct opposite. I will hold off with any wild optimism.

My Suggested course is what Ronald Reagan said about the USSR/Russia Arms deal.