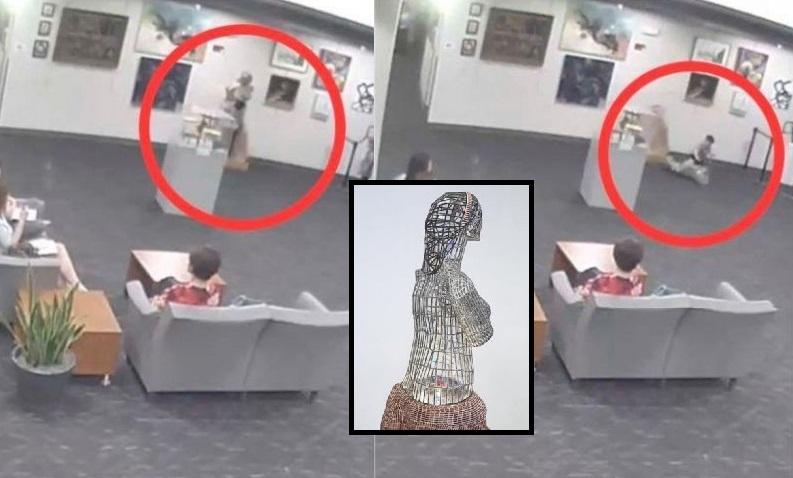 It is, of course, every parent’s nightmare: you turn your back for five seconds, and your young child has damaged someone’s else’s property. Is it an accident or is it intentional? This is the question for the Goodman family after their 5-year-old toppled a sculpture which was on display at the Overland Park’s Tomahawk Ridge Community Center where they were present for a wedding reception.

The child, clearly unattended, can be seen trying to first climb on the statue and then hold onto it as it glides out of place. For a few seconds, it is dangling as if it is going to fall whilst the boy desperately tries to keep it into place. In the end, he can’t hold it anymore, and the sculpture falls to the ground and breaks.

Great was the surprise of the family when a few weeks later they received a bill for $132,000 which was the selling price for the piece of art, called “Aphrodite di Kansas City”, a sum that the insurance company of the Tomahawk Ridge Community Center claims they owe. The letter read: “You’re responsible for the supervision of a minor child… your failure to monitor could be considered negligent.”

“Maybe my son hugged a torso because he’s a loving, sweet nice boy who just graduated from preschool.”

“I don’t want to diminish the value of their art, but I can’t pay for that.”

Although many expressed sympathy for the family not being able to dish out $132,000, most commenters we saw on Youtube and Twitter all agreed that the mother is ultimately responsible for her child and this could indeed be considered negligence.

The artist who created the piece, Mr Bill Lyons, states that the sculpture was damaged beyond repair: "I want to be reimbursed for the amount of time that I spent on it and for what I think it is worth."

It has now been left to the insurance companies of the two parties involved to resolve the matter.

Likely built in under a week.

Kid broke it yes, but is it even worth 10% of what the Artist's ego wanted?

What if the thing fell on the kid?

Museum has no insurance? They should be shut down.

Good luck in trying to collect money from a 5 year old.

Did either of you read the article or bother to learn some basic details?

It's on loan in a community center, not a museum. And it took TWO YEARS to create the statue. It was secured with clips to the podium so it never would have fallen onto anyone… Unless someone climbed it. Unfortunately failure to watch your kids and remind them not to touch anything is the problem here

You brought your kids to a museum. You are responsible!

I could make that in less then a month with a tig welder and a disk grinder. that is not worth more then 200 dollars in basic material and it is a horrible waste of metal, save the earth, don't make shitty art.