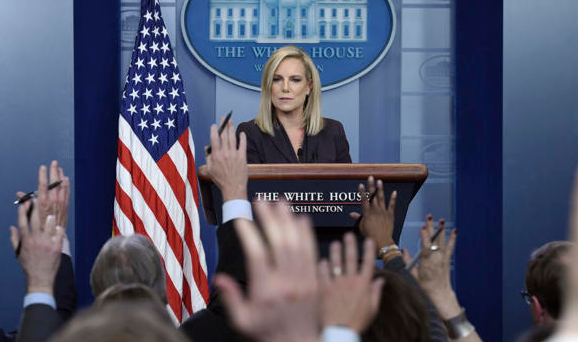 Protesters upset at the White House administration’s policy of separating migrant children from their parents directed their anger at Homeland Secretary Kirstjen Nielsen as she tried to enjoy a working dinner at a Mexican restaurant in Washington, DC.

On videos that have surfaced on social media, Ms Nielsen can be seen seated at the eatery near the White House.

The Metro DC Democratic Socialists of America admitted afterwards they were responsible for the restaurant protest aimed against the homeland security secretary. It comes as positions are intensifying over this issue.

Ms Nielsen tried to enjoy a working dinner as protesters shouted at her. Her security detail did manage to keep demonstrators from approaching too near her table, which had been carefully chosen at the back of the restaurant in order not to disturb other dinner guests at the venue.

Ms Nielsen got up silently and left the restaurant afterwards.

The group that had booed her placed a comment underneath the video of Ms Nielsen being driven out of the restaurant, which stated: “Secretary Nielsen and everyone else who has carried out these brutal and cold-blooded orders to rip apart families should never be allowed to eat and drink in public again.”

“These barbarous acts must end and those at the helm must be held accountable. While Secretary Nielsen’s dinner may have been ruined, it is nothing compared to the horrors she has inflicted on innocent families.”

Washington DC protesters were taking aim at Ms Nielsen as she became the face of the Trump administration’s policy of separating children and families at the border, a policy which is a continuation of the previous Democratic presidency.

Jesus when they will stop??

Bit harsh, the woman is sitting down having dinner. Furthermore, Canada does the same, as do some EU countries.

Ridiculous. Obama did the same thing and no one said nothing.

The difference is now the Main stream propaganda outfits have 2 choices.

The right choice - talk about the IG report.

Its extremely obvious that the liberal media/propaganda outlets don't want the masses to know the BS over the last 2 years were spewed to cover their asses and propel their agendas.

These hecklers are so off with their facts, 1st we have 12k children in way better conditions than they ever lived in. 2nd 10k of these kids came alone IE no guardians. And 3rd the kids that came with their real parents/guardians will be reunited in 20 days.

Those retards chanting open boarders, sanctuary state should have their heads examined as how would anyone have any type of sanctuary with 100's of thousands of violent non English speaking people flooding in? I was reading that if we had open boarders we would see an influx of half the US population within a few years. So much for your sanctuary then. Fucking imbeciles!!

Remember these Restaurants. Because they must have staff or Mgt. that told the Protesters she was there.