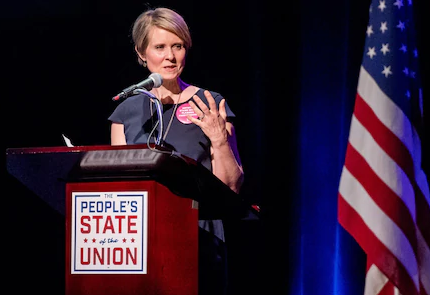 The Democratic Party’s progressive side is making its voice heard ever louder as Bernie Sanders copycats try to outdo each other on the far left, preparing both for the 2018 midterms and the 2020 Presidential Elections whilst younger voters are energized.

Whereas the Mainstream Media in the US bashed away at the child separation policy for illegal immigrants this week in order to make the White House administration look heartless, they at the same time fed the beast that will chip away at their own centrist power whilst their base becomes harder entrenched on the far left.

The latest of these voices to make herself heard is progressive gubernatorial candidate for New York, former Sex And The City actress Ms Cynthia Nixon, who declared that “ICE is a terrorist organization.”.

Appearing on ‘The View’, Ms Nixon stated that ‘we need to abolish ICE, that seems really clear’ in light of the media reporting of this week.

Ms Joy Behar, a regular panelist on The View (not really known as a fan of all things reasonable having recently attacked VP Pence for his Christian beliefs), then went on to ask ‘… and replace it with?’ as even she tended to realize you do need some sort of immigration control, to which Ms Nixon replied that any replacement would not even be necessary.

Ms Nixon claimed that “ICE has strayed so far away from its mission. It is supposed to be here to keep Americans safe but what it has turned into, frankly, is a terrorist organization of its own that is terrorizing people who are coming to this country.”

“ICE operates as an unaccountable deportation force. Dems running in 2020 should campaign on ending the agency in its current form,” Mr Fallon recently stated on social media.

This dingbat looks like a crowing rooster in that 1st pic. I think her call sounds something like… No-cock-il-do

I guess if you want work in the film industry, this what you have to do to get noticed and maybe employed. I guess the casting couch wasn't on offer to this dyke…

this alien creature dyke bitch supports THE DEA and IRS but hates ICE. what a dumbass.

LOL at the first post, "No-cock-il-do" hahaha… this is another Hollywood, lesbo freak-of-nature.