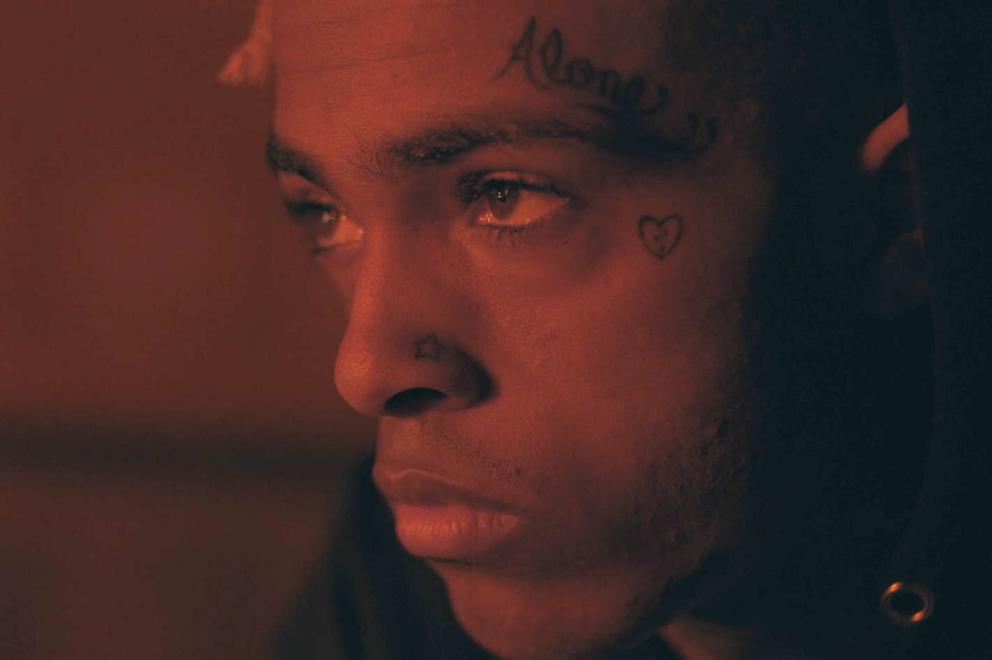 "He left us a final gift," Cleopatra Bernard wrote on Instagram, next to an ultrasound picture of the unborn child.

The news was also confirmed on the rapper's account, with the message: "May the new baby know his father was a legend."

At the time of his death, the rapper had been charged with beating an ex-girlfriend while she was pregnant.

The 20-year-old musician, real name Jahseh Onfroy, has been arrested after prosecutors claimed he coerced woman accusing him of domestic violence into signing a document to drop charges.

Onfroy’s charges were almost double from a 2016 domestic violence case, bringing the total to 15. He was currently awaiting trial for aggravated battery of a pregnant woman, domestic battery by strangulation, and false imprisonment.

The 20-year-old musician, real name Jahseh Onfroy, was shot as he left a motorcycle dealership in south Florida on Monday and died later in hospital.

Authorities said the rapper was ambushed by two suspects in an apparent robbery attempt.

A suspect, Dedrick Devonshay Williams, was arrested on Thursday and faces a charge of first-degree murder.

XXXTentacion's lawyer, J David Bogenschutz, told People magazine his family "will be much calmer as soon as it is confirmed that all of the suspected participants are in custody".

The musician was one of the fastest-rising artists in the US, after breaking out with the bratty, distorted song Look At Me! in early 2017.

But at the same time as his career took off, the musician was in jail, after being arrested on charges including aggravated battery of a pregnant victim and false imprisonment.

He was awaiting trial on those charges at the time of his murder.

A timeline of his criminal history:

2013–2014, XXXTtentacion spends around nine months to a year in a juvenile detention center for a gun possession charge.

November 16, 2015: XXXTentacion is charged for committing home invasion, robbery, and aggravated battery, according to court documents.

April 24: XXXTentacion does his first long-form interview on the hip-hop podcast No Jumper. He discusses his troubled past and time in juvenile detention. He includes a very graphic story about beating up a cellmate, whom he refers to as a “faggot,” describing every violent act in gruesome detail. After mentioning that he wiped the man’s blood on his face, Adam22, (full name Adam Grandmaison), the BMX rider and hip-hop podcast host, contributes an equally disturbing response — “Warpaint. That’s tight,” he says.

Mid-May: According to a testimony obtained by Pitchfork in September, XXXTentacion and his (former) girlfriend (and alleged domestic-abuse victim) first met.

Late May: The first instance of domestic violence allegedly takes place. According to his ex-girlfriend’s testimony, XXXTentacion threatened to penetrate her vagina with a “barbecue cleaner” or a “barbecue fork.”

July: XXXTentacion and his then-girlfriend move to Orlando.

Mid-July (approximately): The second incident of alleged domestic violence occurs. XXXTentation allegedly kicked, punched, tackled, and “stomped on” his ex-girlfriend, because he heard her singing another artist’s song, the testimony in Pitchfork states. He also threatened to “cut out,” her tongue, the victim said.

August 9: XXXTentacion is arrested for his 2015 robbery and assault charges. He is held at Broward Regional Detention Center in Fort Lauderdale.

September 16: XXXTentacion agrees to house arrest, and is released from jail. Soon after, he allegedly assaults his ex-girlfriend again after she confesses to sleeping with another man. According to her testimony, he put a knife to her throat, strangled her “a little bit,” and threatened to hit her with a glass bottle.

Late September: XXXTentacion and his then-girlfriend move to Sweetwater, Florida. XXXTentacion is accused of strangling her on two occasions around this time, the testimony in Pitchfork states.

Early October: XXXTentaction’s ex-girlfriend finds out that she is pregnant with his child.

October 6–8: Over the course of two days, several instances of domestic violence allegedly take place. According to XXXTentacion’s ex-girlfriend’s testimony, he threatened to kill her and her unborn child before elbowing, punching, and kicking her. When she asked other residents of the pair’s apartment to take her to the hospital, XXXTentacion refused to let her leave. She recalls him saying that she needed to wait until her face (which was severely beaten) had healed. XXXTentacion and his housemates then drive her to another apartment, where they leave her in a bedroom and confiscate her phone. She is trapped there for two days until, on October 8, she manages to escape and contact the police.

October 8: XXXTencacion is arrested in Miami-Dade County, and charged with aggravated battery of a pregnant woman, domestic battery by strangulation, false imprisonment, and witness tampering. He pleads not guilty but is detained by Broward County for violating his house arrest agreement. A trial for the domestic-abuse charges is set for May 1 (this trial later gets pushed back to October 5, and then December 11).

March 26: XXXTentacion pleads no contest to the charges of armed home-invasion robbery and battery, and is released from jail on probation.

March 29: In an interview on Miami’s 103.5 The Beat, XXXTentacion accuses Drake of stealing his flow. “He is not a man. I think he’s a bitch, that’s a bitch move,” he tells the interviewer.

April 7: XXXTentacion hosts a “surprise” show in Miami, which turns into a riot. Police intervene, shut down the show, and escort XXXTentacion out of the building.

June 7: XXXTentacion is knocked out onstage at a show in San Diego. In the brawl that ensues, someone gets stabbed. Fans blame rapper Rob Stone for the incident.

June 14: XXXTentacion punches a fan at a show in Salt Lake City.

October 5: A new trial date is set for December 11.

October 21: During his performance at the Rolling Loud festival in the Bay Area, XXXTentacion gets into another fight with a fan. A video of the incident shows XXXTentacion hitting the crowd member in the head with his microphone. In a video released on Twitter later that night, XXXTentacion argues that he was punched first and acted in self-defense.

October 27: In another Instagram story, XXXTentacion says that he “will not be making or releasing any music.” “I am tired of being mentally abused for trying to help people, I’m tired of the hate, I’m done,” he writes.

October 29: XXXTentacion says, via Instagram story, that he will return to music if Ski Mask The Slump God agrees to be his friend again. “Tell Ski Mask to be my friend again and I will make music. Tell him to be my friend again,” he said in the (now deleted) post. A couple days later, in a video, responded, “I will always love that alien-looking n*a named XXX, but I have to distance myself because nobody would see me as an individual,” and “On top of that, that n*a crazy as hell.” Then, he wrote on an Instagram story: “This is a person who has before threaten[ed] my family, told me I was supposed to be sacrificed on some crazy shit,”

November 2: XXXTentacion posts a snippet of a new song on Instagram, with a caption reading: “said I was going to stop making ‘music’ but… I don’t consider this ‘music.’”

November 26: XXXTentacion announces that he plans to host an “anti-rape” event at this year’s Art Basel in Miami.

December 1: XXXtentacion and his lawyers submit a document, allegedly signed by his ex-girlfriend, to the DA’s office in hopes of getting his domestic-assault case dropped. According to TMZ, the document states that XXXtentacion’s accuser is refusing to cooperate with prosecutors and wants to drop the case.

December 15: XXXTentacion is jailed ahead of his abuse trial, with seven new charges added, including different degrees of witness tampering and witness harassment. According to TMZ, prosecutors believe the rapper coerced his ex-girlfriend into signing the previously submitted documents that claimed she wanted the charges dropped. His bail is denied. He now reportedly faces “decades in prison, at a minimum, if convicted.”

December 20: TMZ reports that XXXTentacion will be released from jail and serve house arrest for two months ahead of his trial. His attorney David Bogenschutz told the site that the judge will allow the rapper to visit a local recording studio to fulfill his contractual obligations during this time.

March 21: XXXtentacion is released from house arrest so that he can go on tour, TMZ reports. According to the article, XXX’s legal team argued that he would need touring income to “stay afloat,” because his earnings from record sales weren’t sufficient.

May 10: Spotify removes XXXTentacion’s music from its playlists in accordance with a new Hate Content and Hateful Conduct policy. His reps issue a statement listing other artists accused of abuse, asking if they will also be penalized.

June 5: XXXTentacion is the subject of an extensive profile in the Miami New Times detailing his alleged abuse, including interviews with his accuser. In it, XXXTentacion dismisses feminism, saying “Women may see or feel that they’re belittled, but you’re only belittled if you want to be belittled.” He uses Hillary Clinton as an example: “She ran [for president] and she wasn’t killed for it. That says everything.” He says that, in the post-#MeToo era, allegations “can go off hearsay” and “women are almost more powerful than men.”

June 18: XXXTentacion, 20, is reported dead following an alleged drive-by shooting outside of a motorcycle shop in Deerfield Beach, Florida. He was awaiting trial at the time of the shooting.

The identity of his unborn child's mother is not known, but it is not thought to be Geneva Ayala - who filed the original charges against him.

I'm sorry if I don’t share the same sympathy as the mainstream media. This guy had a long rap sheet for someone who was just born in 1998.

Yikes!! This was one very angry and troubled young man. This is a very tragic story. 😢

Great article Lexy. Way too many people are celebrating him just because he died. He was a bad guy. It's important people know the depths of his crime & the way you laid it out so clearly is so great. Keep them coming!!!

Bad news Lexy. The dude was no good. The glorification just amazes me. The Left always makes the same mistake of elevating horrible role models.

Tragic story. What a disturbed person.

The only thing I have heard about this POS up till now has been praise for him. I can’t beleive the things that he has done. Why do so many media outlets whitewash everything? Thank you for delivering the truth.

It seems to me the baby is better off with this vile creature gone. Great timeline Lexy, it shows just how much of a thug he was.

Sad that so many die that way… Not that he appears to have had much to miss. Not such a nice guy. These thugs need to learn how to control their anger. It's a rough life they choose

Out of this entire article about him, I couldn’t get over the fact that he beat his pregnant girlfriend. What a vile human being he was. A total disgrace. Thank you for this story. People should know the kind of guy he’ really was.

Plain brown rapper finally crumpled up and thrown away with rest of garbage.

i'm glad the bitch is gone…

all people are the same, jus sum bee SAVAGES.