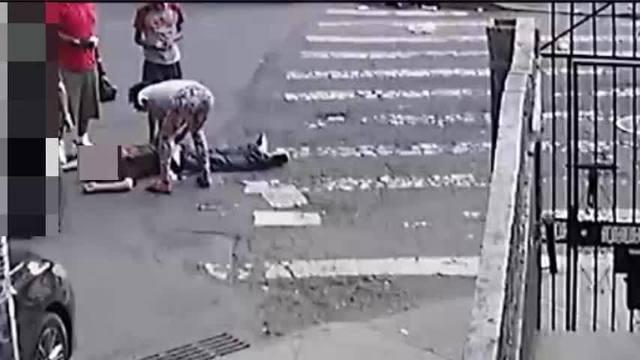 A man was attacked in the middle of a Bronx intersection in broad daylight. While unconscious, he was victimized anew as another gang "citizens" came to rob him.

The incident took place on June 18 at around 6:10 a.m. at the corner of Aqueduct Avenue and Buchanan Place. Police say that the 37-year-old victim was just walking at the location when he was approached by two still unidentified men. One of the men punched the victim in the head so hard that it caused him to fall to the ground in the middle of the intersection.

After the victim was unconscious, the thugs who attacked him simply walked away. Then other people came up to the man and started going through his pockets, taking away his phone and ID. It is not clear if they also took the victim’s wallet and money.

The NYPD say the men who attacked the victim came back to take photos of the man as he laid on the ground.

It is not clear yet whether the attackers and the one who went through the victim’s pockets are related or known to each other.

It is also yet to be established whether the victim was targeted for the attack from the start, and not a random crime. The authorities are still investigating to determine the identities of the suspects and their motive.

The victim suffered a fractured skull and was brought to St. Barnabus hospital via EMS. He was in critical but stable condition.

The NYPD released a video of the incident and is requesting the public’s help in identifying the suspects’ identities and their locations.

The police describe the attacker as Hispanic, in his 20s, with a medium complexion, medium build, black hair and a black, trimmed beard. He is sporting tattoos on both of his forearms. He was last seen wearing a yellow baseball hat with a triangle shaped logo, a white t-shirt, denim shorts and black sneakers with yellow trim.

The second suspect is described as Hispanic, in his 20s, with a light complexion, a slim build, black hair and a black beard. He has a tattoo on his right forearm. He was last seen wearing a light blue Yankees baseball hat, a light blue t-shirt and a yellow t-shirt, a black belt around his torso, camouflage cargo pants and black boots.

Anyone with information is requested to call the NYPD's Crime Stoppers Hotline at 1-800-577-TIPS (8477). Police say that all calls will be treated as confidential.

And the Idiotcrats want millions more of this type of trash brought into the US!

Those shit stains will probably post the pics to snapbook, faceagram, or twatter. Just sick seeing the "WONDERFUL" diversity taking advantage of a victim!

Get rid of these illegals now.

beaten by wetbacks then robbed by niggers. ARM YOURSELVES, PEOPLE!