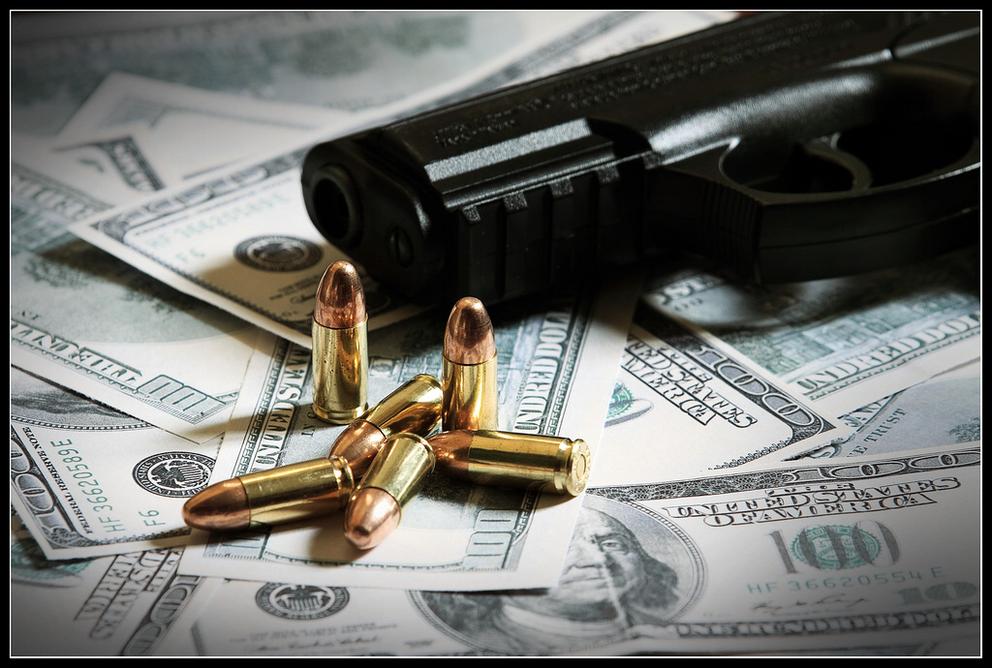 Can ammo actually serve as a currency?

This video is pretty interesting.

In economics classes, we are taught that money has come in all shapes and sizes throughout history. Some forms include salt, cattle, dolphin teeth, knives, beads and even giant stones. At some point, however; society almost universally decided that gold, silver and other metals (copper, bronze) were a good material for currency.

According to economists, the currency must have three basic qualities

1. The medium of Exchange – people must be able to make business transactions and those transactions are accepted by others as payment.

3. Store of Value – the currency must hold its value over a reasonable period of time – precious metals do not rust or decay so they are a constant store of value.

Throughout history, people relied on precious metals to form the basis of their currency because they provide those three functions.

Now, given the roles of currency described above, some would argue that today’s fiat currencies lack the third criteria – a Store of Value.

So what does this mean for ammunition and its use as currency?

For people who shoot and own firearms, it could be used as a medium of exchange. If there was an economic collapse, ammunition manufacturers could pay workers in ammo as a form of currency and people could barter using different calibers as units of exchange.

To people that need ammunition, it can be a great medium of exchange because, for the most part, a 9mm round is pretty much the same as any other. Though there are some differences in calibers as we try to distinguish in our Quality Grade System, if the market for 1000 rounds of 9mm is $250 then that is $250 that could be used for trade for tools, guns, or gold.

As a unit of account. If you follow the logic from above and expand it to different calibers, then you have a possible structure for a unit of account – you would just need an exchange rate or a “primary” caliber.

Just like today in America, you have dimes, quarters, and nickels which are all denominations of a dollar – you just need to establish a hierarchy in ammunition.

Is a .308 round equal to (4) 9mm rounds or (5) 9mm rounds? Today we have dollars to give us the answer, but if you only have ammunition then supply and demand would dictate the hierarchy. Certain calibers may be in higher demand due to their rarity.

Finally, you have “a store of value”.

The dollar is slowly getting inflated away each year they print money, but how does that affect the price of ammunition? If you have been a gun owner for several years you’ve probably seen the inevitable inflation of ammunition. For example, you used to be able to buy a box of .22 for $0.50 or 1 cent per round – now you are lucky if you can get it for 5 cents a round! Think of it, not as the price of ammunition is going up, but rather, it is taking more dollars to buy the same thing – the intrinsic value of your dollars has dropped relative to your ammunition.

As a store of value, ammunition is doing better than the dollar but it won’t be as permanent as gold. All ammo eventually corrodes or simply won’t fire after a number of decades (though today they still find ammunition from ww2 that is fireable. That’s over 70 years later!). If stored properly and rotated with use, your ammunition supply will certainly increase in dollar terms.

So where does that leave us?

Ammunition is a better store of value than fiat currency. For a gun owner, it could be considered better than gold because you are storing something that you can both use or trade/sell someday.

Here at The Goldwater, we are well respected by our Employers and they realize we could be facing a Government crisis one day soon. Understanding the price of fuel and knowing how quickly the Government can start a gas war, and also understanding the push for gun control, they graciously pay bonuses in ammo and fuel cards. I can’t describe how much this means to me. I drive over 100 miles a day.

lol @ Jim ripping his employees off, and Lexy being so stupid that she thinks it's a good thing. What would you expect from a pig farmer who fled America to avoid tax evasion charges ?

So, in other words, Jim can't afford to pay you?

Maybe you should have interpreter help you understand what you read…

She has explained very clearly how ammo and fuel are great, stable forms of pay.

Goldwater employees seem to be very grateful to their employer and seem to feel a connection and camraderie that most enterprises strive for.

Maybe if you bone up on comprehension and writing skills, you too could apply..

It makes me sad to see you looking in the window at them like a Dickensian child at Christmas inyour loneliness and jealousy.

Good article, once again Lexy! I know many that would love to be paid in fuel and ammo!

What an interesting concept. I need to start buying more ammunition it seems. I love when I learn something valuable when I read an article. Nice work.

The Goldwater breaks new ground in compensation packages. The Fortune 500 would do well to take notice. Bravo!!

An that my dears is why I have trading ammo and own firearms.

In the event of another economic collapse.

Or even worse nation popping just 4 EMP weapons over the USA and frying 90++% of all the Electronics and wiping out all electronic financial records in seconds.

Ammo, if sealed and stored properly will last 100+ years aka longer than I'll be living.

Also fancy metals will become nearly impossible for the use of purchase use daily items (bread, milk, eggs flour).

Also note: The US Military and FEMA both have tested and determined that Solid Pill Medicines (not capsules or liquids) will retain 90-95% of their full strength for 10-15 years after the fictitious manufacturers Best By Date.