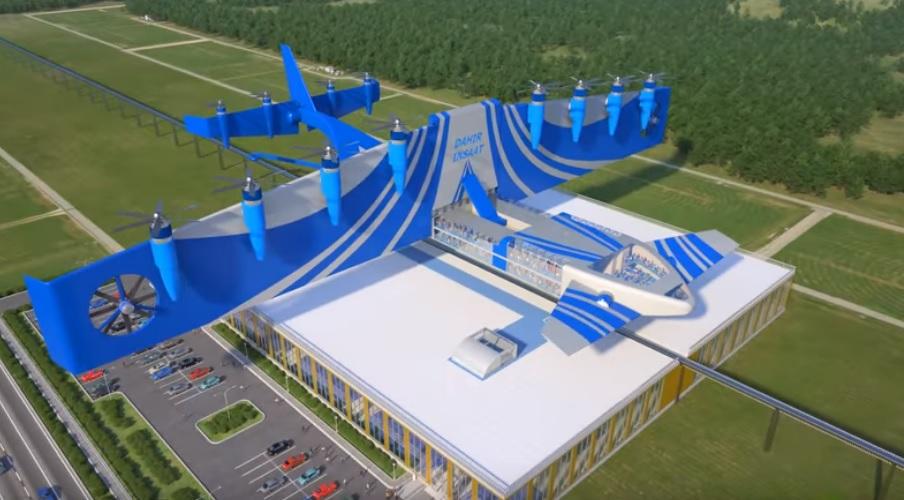 A Turkish architecture firm named Dahir Insaat has designed a concept for a flying train that would serve as a form of mass transportation. The multi-level flying train could carry up to 2,000 passengers and would fly at a low level while drawing power from a tether attached to the track.

The flying train would have a cruising speed of over 300 mph making it one of the fastest forms of mass transportation. Instead of using jet fuel, the flying trains over dozen motors would be powered via the trains tether. The concept's motto is "Flying low and riding high".

The flying train concept's creators at Dahir Insaat said, "This hybrid train and plane is good because of several factors: the first remaining attached to the current collector in a steel trestle, we will always have enough power to make any maneuver, high-torque motors would do wonders of acceleration at their full power, furthermore, aviation now expects 7 kilowatt electric motors from producers with the capacity per kilogram of the motor's own weight."

Related coverage: <a href="https://thegoldwater.com/news/23369-Euthanasia-Expert-Unveils-Suicide-Machine-Die-At-The-Push-Of-A-Button">Euthanasia Expert Unveils Suicide Machine: Die At The Push Of A Button</a>

"Even though a passengers transport would not require that much power, it is at an advantage to have a power reserve that is always with you and doesn't burden you (as it is beneath you). The gravity of the aircraft (the ratio of the thrust of the aircraft's powerplant to its weight) is one of the most important parameters that determine the aircraft's flying characteristics. The maximum speed of the aircraft, the climb time (climbing speed) and acceleration to the specified speed, as well as its maneuverability, depends on the thrust.

"When flying, when we can consume an almost unlimited amount of energy (at least a few megawatts) through the current collector, the apparatus can have a very high carrying capacity, and the figures of 1000-2000 passengers are not fictional. The speed of 500 km / h can be the usual cruising speed throughout the entire flight from station to station."

I like the euthanasia story link embedded in this one. You don’t need a euthanasia machine when you can commit genocide on 2000 at a time in one of these.

Welcome aboard the death train where we travel at 2500mph @ 100agl all while dragging a fuckin cable along a track. Come see us tear by your town soon! A sight to behold, a modern day tesla show. Enough ozone per cubic meter to naturally keep weeds down and prevents MOST animals from getting cut in half from our awesome super safe cable were dragging. To add to the safety we only have an unlimited* amount of power at the rail and cable. *unlimited restricted to 2.1 gigahertz on stormy nights to protect our flux capacitor banks.

Previous poster should probably think more and write less. The cable tether travels along an elevated track resembling that of a metro rail line (see the pic). There will be no massacre of wildlife, at least no more than caused by high speed trains or small planes that take off and land constantly across the US. The props will generate noise, but much less than one would expect as they are powered electrically vs. by fuel combustion. Because of this, the flying train itself doesn't generate ozone because it doesn't produce the volatile organic chemicals or nitrogen oxides that give rise to ozone. Those compounds would definitely come from fuel combustion, like the trains, planes, and automobiles that would otherwise be used to move people hundreds of miles at much slower speeds. The source of the electricity does seem like a serious concern. Maybe we can just build a nuclear power plant. ;)

Optimismfornewthings, I think your mistaken about ozone and internal combustion. Ozone is created when Coronas are formed as in spark gaps, lightening, or some megawatt rated slip ring as in this retarded idea. But barring all the above mentioned I would be scared to death flying an aircraft tethered to a rail. If anything causes the pilot to correct and that correction causes tether to go tight it would pull the aircraft straight into the ground. My vote is back to the drawing board. Here’s an idea, build a network of tubes all over the place and pull a “plug” shaped car loaded with passengers through it via vacuum.

This is as un-buildable as the heli-carriers in "The Avengers" movies. Stop giving idiots any fame, let alone 15 minutes.
Just because you have a graphic doesn't mean that you have provided the engineering consideration.
There are a number of reasons why this is impractical, but the most overwhelming is that the ground will be scoured to the point that the track, it's supports, the station, the cars in the parking lot - will be blown away till there's nothing left.
Ever been around a helicopter landing? Same thing.