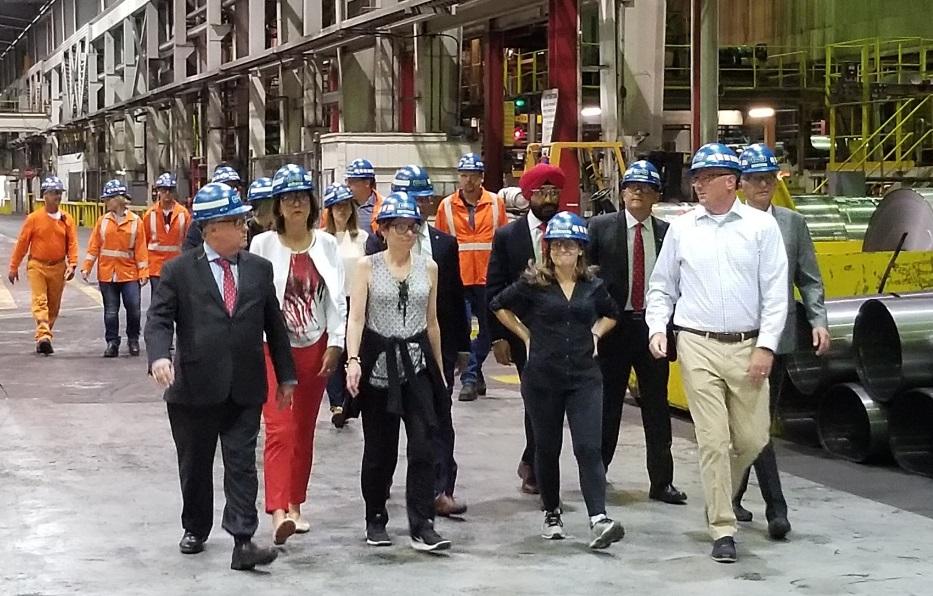 Canada - Foreign Minister Freeland On US Tariffs: “We will Not Back Down” (Video)

The Canadian government of PM Trudeau hit back at the US White House Administration of President Trump by imposing punitive tariffs on some C$17bn worth of American goods.

The list released by the Canadian Finance Department showed that it concentrates on steel and aluminum, but foodstuffs like coffee, ketchup and whisky exported from the US would also be slapped with a retaliatory tariff, probably increasing their price for Canadian shoppers.

The list seems to be focused on key US political battlegrounds for the upcoming midterms such as Wisconsin, Pennsylvania and Florida given that it includes American yoghurt, ketchup and orange juice.

During a visit to the Stelco Holdings Inc plant in the steel city of Hamilton, Ontario, Canadian Foreign Minister Chrystia Freeland made it clear that: “we will not escalate and we will not back down.”

"The US action which initiated this is an illegal action under both WTO & NAFTA … we are perfectly within our rights to respond."

Meanwhile, just as in Britain during Brexit negotiations with the EU, business leaders are starting to express their concern for the rising trade war between Canada and the US. General Motors stated that they thought imposing tariffs on imported autos would ultimately cost US jobs.

The US car maker, which has large manufacturing facilities in Mexico and Canada, claimed that such tariff impositions would: “lead to a smaller GM, a reduced presence at home and abroad for this iconic American company, and risk less, not more, US jobs.”

Canadian officials also unveiled a C$2bn aid package for their own steel and aluminum industry which has about 6,000 jobs at risk due to the ongoing trade war with the US.

Mr Ken Neumann, head of the Canadian United Steelworkers union, claimed that the aid was "a good first step that will need to be expanded if the trade dispute continues beyond the short-term."

Trudeau vs Trump! I know who my money is on… LOL

America for 30 years has exported our jobs and manufacturing abilities to Canada and Mexico. Manufacturing that either ran to avoid the Liberals Constant quest for more TAXES and/or the Unions Leadership, that in the past funneled $100's of Millions into the Liberals pockets. America even help these nations build and employ millions of their own. NAFTA was a great deal for them. The RINO's agreed to DINO written NAFTA "provided" it include better border controls and immigration enforcement was part of the deal, BY ALL 3 Countries.

Just like of every Immigration Border deal made with the Liberal. The Liberals have reneged on every one to date all the way back the 1970's under Carter/Reagan Amnesty agreement.

To Date: Mexico continues to allow everything under the sun to violate the South Borders and Canada after the Liberal took control up there did the same thing for the Pacific seeking access.

Now we want them honor their Immigration control and trade agreements and quit being an import harbor for 3rd party goods being dumped into America.

Hey Canada, without the US there is no U!! Remember that, you socialist twats!