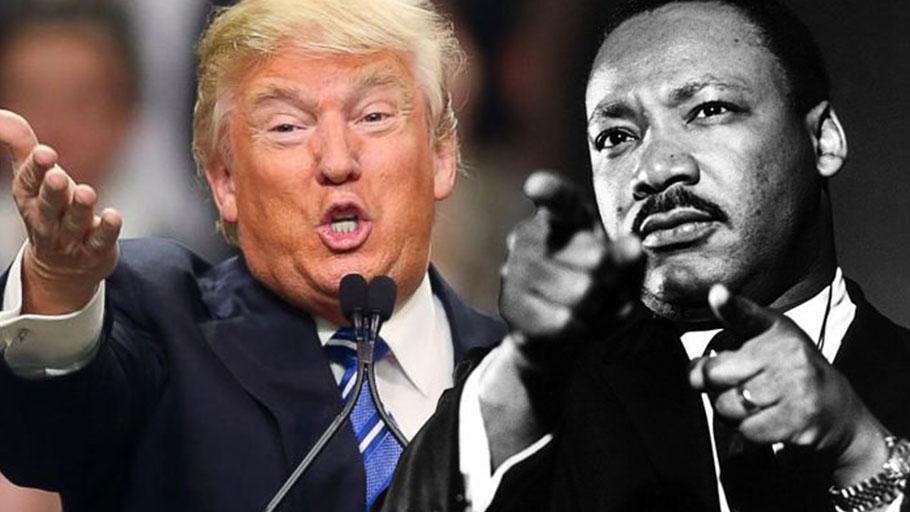 President Trump believes in the message of equality - as do all Americans - and the Obama-era policy of having colleges and Universities use a person's race as a guideline towards acceptance rates that “promote diversity” are racist - so the 45th President of the United States of America is going to end them.

This Obama policy has been widely criticized by both White and Asian-Americans, who are each exempt from receiving the additional push towards college acceptance because of their skin color, where the Obama regime helped keep White and Asian students out of universities <i>no matter how high their scores and qualifications are</i> in a racist attempt to promote “diversity”.

In a nation where <i>all men and women are created equal</i>, it makes little sense to promote any specific race or ethnicity over another based upon how they're born, and that's what the Democratic Party has attempted to do for several decades.

<blockquote>“I still have a dream, a dream deeply rooted in the American dream – one day this nation will rise up and live up to its creed, "We hold these truths to be self-evident: that all men are created equal." I have a dream…”</blockquote>

In 2018, we all start from the same place when crested, and must <i>earn respect</i> through hard-work and dedication, achieving the most out of our lives by putting in the effort to accomplish those goals.

College campuses should be filled with the best and brightest Americans who have the most potential based upon their merits and how they strive for success.

These are the future leaders of America, and whether Black, White, Asian, Hispanic, Jewish, Arabic, Indian, or Islander; they should be judged as <i>Americans</i>, and rewarded by their own actions.

The Democratic “plantation” attempts to hold Americans down, especially minorities, by putting in their minds a constant state of feeling as if they're in “enslavement,” and unable to achieve the successes they're capable of without an extra push from the left.

This is untrue. All Americans are capable of succeeding in anything they do in life. It's <i>your responsibility</i> to take initiative and lead the charge towards your own prosperity, and <i>you can do it because you have that power</i> in a nation of equal rights.

Having any restrictions, regulations, rules, or laws that are based upon race alone or give benefits of any kind to one skin tone over another is the very epitome that the term racism was founded upon, and we must denounce all forms of racism in an equal nation.

The new shift from the Trump Administration gives Universities and campuses across the nation the ability to award entry to the very best students no matter what color their skin is, and that's an amazing thing to see.

With the retirement of Anthony Kennedy from the Supreme Court Of The United States, a new justice will be appointed by President Trump who believes in these values and ideals, likely relinquishing future freedoms to Universities to allow only the best of students of every color to come aboard their ship towards brilliance.

Kennedy sided with the left far too often in promoting their racism, and seeing him go under Trump is a blessing for the sanctity of equality in America.

We've also narrowed down the choices of Trump's next Justice for SCOTUS in the article:

<a href="https://thegoldwater.com/news/30274-Trump-s-Supreme-Court-Picks-are-Down-to-These-Four-Conservative-Diehards">President Trump's Supreme Court Picks are Down to These Four Conservative Diehards </a>

The liberal grasp over America, and over the minds of Americans, is now lost. Chains have been broken under President Trump, and the nation is truly free.

The Justice and Education Departments are set to make formal announcements as per the reversal of the 2011 Obama Regime policy, with a guide that said schools have a “compelling interest” in ensuring a diverse student body.

In 2016, Obama again set forth a guidance which said that schools should be “considering race to further the compelling interests in achieving diversity and avoiding racial isolation.”

This, again, is racism.

As part of Obama's guidance policy, elementary and secondary schools were allowed to consider race and socioeconomic statuses as per decisions on school zoning, again making racism the primary focus of educating young minds.

Such a decision and guidance is beyond ignorant, and race should never be a factor in determining how our children are educated. A race is not a factor in America outside of the Democratic plantation, and there is no underscored racism in 2018 outside of very small groups of extremists of every color of people.

Yes, there truly are White supremacists, and those movements were founded by Democrats. We're talking maybe a few tens of thousands total nationwide out of 350 million Americans.

Yes, there truly are Black supremacists, and those movements were also founded by Democrats. We're talking maybe a few tens of thousands total nationwide out of 350 million Americans.

There are extremists of every color. Their opinions do not guide our nation, and they should be denounced and ignored by all Americans as a whole, which they are.

The Bush Administration also discouraged Affirmative Action-style programs, and backed race-neutral approaches, as did the Clinton Administration’s successful economic prowess before it.

Laws benefiting one people are horrendously racist, and simply do not work. No person should be shamed based on their skin tone.

While the new guidance from the Trump Administration is not a law, it's a policy of promoting equality and fairness across the board.

The Justice Department in the Trump administration had already signaled its concern about the use of race in admissions decisions. Earlier this year, the DOJ sided with Asian-American plaintiffs who were engaged in a lawsuit against Harvard University by arguing that the school unlawfully limits how many of Asian students are admitted, a prime example of racism at it's finest.

The group responsible for the lawsuit against Harvard, Students for Fair Admissions, which is by legal strategist Ed Blum, assisted a White student, Abigail Fisher, in her lawsuit against the University of Texas for their discrimination against her based on her skin color in a case that inevitably went to the Supreme Court.

On Tuesday, Blum said that the Students for Fair Admissions group “welcomes any governmental actions that will eliminate racial classifications and preferences in college admissions.”

Harvard University has since said it would continue its racist policies of “considering race as an admissions factor to bring together a diverse campus community where students from all walks of life have the opportunity to learn with and from each other,” which is one of the reasons the once-acclaimed Ivy League school is now considered as a joke compared to its predecessors’ generation.

Be proud. Stand tall. Succeed at your own pace with the amount of effort you feel us required to put into accomplishing that success.

Successful people of every ethnicity achieve this success based on their own work ethic and actions because nothing is handed to you in life.

Even the child of a multimillionaire would fail had they not put in the effort to turn their fortune into continued profits. There is no denying that success is acquired, and not handed to you.

Those who have come from absolutely nothing have strived towards cresting billion-dollar companies, and that's the beauty of America.

You can be anything you set your mind to, and accomplish anything you work towards achieving. Success is a beautiful thing, and it's earned by your own actions.

You can get involved yourself and demand Congress introduce legislation to end the racist policies of Affirmative Action in America by contacting your elected officials.

Justice Kennedy is a total pos. it's doubtful that trump will make the same mistake when replacing him…. blacks are angry because they can't compete intellectually with smart whites and asians….. but now they must put an end to the racist athletic scholarship practices where savage MORONS get their grades massaged so that they can win games for the university.

Now I understand why the USA is so fucked up by diversity and equality! The best of your country was usurped by fools elected by fools employing fools. Wake up!