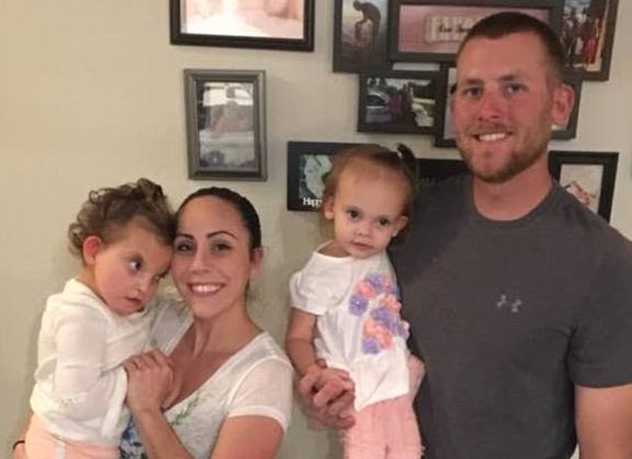 Tragedy has struck a loving Texas couple who are considering a great sacrifice in order to be able to continue paying for the healthcare of their disabled child.

Army veteran Mr Jake Grey explains that $15,000 of his $40,000 a year salary goes to the healthcare of their disabled daughter Brighton, who is six years old but due to a genetic chromosomal disorder known as Wolf-Hirschhorn Syndrome, functions like a newborn.

Maria and Jake love each other very much still but say that the costs of taking care of Brighton are having them contemplate a very difficult decision: divorce so Maria could be listed as a single and unemployed mother. In that case, she could qualify for Medicaid.

The couple, who live in Sanger along with their two daughters, Brighton, six, and Fairen, two, explained.

As both Jake and Maria feel that their children’s well-being comes first, they admitted they are considering divorce simply for the sake of receiving healthcare.

“We promised each other and to her that we would do whatever we could do to make her life - however long she is going to be with us - as good as possible,” Maria explained further, as she believes that they “wouldn't have made it this far without each other.”

Army vet Jake claimed: "We just have struggled and struggled with it. I guess now we've gotten to the point where we feel like divorce is a real possibility.”

He claimed: “I think it speaks to our need to really re-think what we do and how - especially for the most vulnerable.”

This is what is jacked up with our system as it rewards people for giving up and going full dependent. Kinda like single mothers that are told to quit their jobs so they qualify for more free shit than they can afford with the job. It should reward people that try to support themselves and need help instead of having them go fully on the gov tit.

Thanks John McCain for sticking us with the dying Obama Care. Give up the Senate seat of die already.

Let's take insurance coverage away from all our politicians and make them get their own. Let McCain go to the VA.