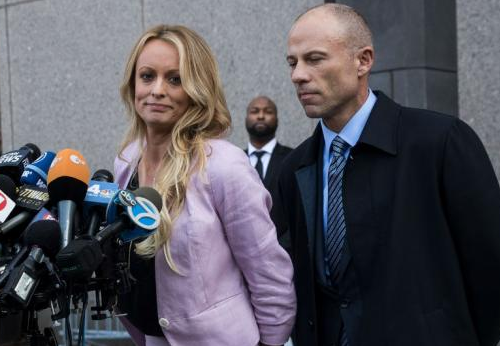 Current mood: schadenfreude. Well, turns out Stormy Daniels is in jail right now. She was just arrested in what her lawyer is calling a “set up.” Further, he claims this “setup” was politically motivated and it “reeks of desperation.” That’s kind of ironic considering the fact that Trump’s attorney-client privilege was violated related to the Stormy Daniels affair based on the Mueller investigation into supposed Russian collusion. Is Stormy Daniels Russian? No? Ok then, sounds like we’re dealing with a case of turnabout being fair play.

Speaking of setups, Russian Natalia Veselnitskaya met with Fusion GPS before and after the meeting with Trump Jr. In other words, it appears that the whole Russophobic scare we’re dealing with started with a “politically motivated” set up that “reeks of desperation.”

Daniels was arrested in the Siren’s Gentleman’s Club for allowing a customer in the Ohio strip club she was performing in to touch her. Attorney Michael Avenatti says they “will vehemently contest all charges” and that he expects her to be released on bail soon.

Stormy has made the news multiple times recently since claiming she had had sex with Trump in 2006. Michael Cohen, Trump’s lawyer says he paid her $130,000 to end the “false and extortionist accusations.” One thing I haven’t seen mentioned much, by the way, is the fact that <i>if</i> Stormy is telling the truth she violated the supposed Non-disclosure Agreement she claims she was asked to sign. In short, even if she’s telling the truth about the one thing she then proves she lied about the other.

“We will vehemently contest all charges,” he said.

Daniels has said she had sex with Trump in 2006 and that Trump’s personal lawyer, Michael Cohen, paid her $130,000 to keep the encounter secret shortly before the presidential election. Daniels has filed a lawsuit to get out of the NDA and also sued for defamation.

charges against her have been dismissed in their entirety.

She wasn't the only one arrested. Stormy got off the hook because she didn't appear at the club often.

Set up???? More likely a staged arrest to keep her name in the news.

Either way, according to local news-media sources, she was using her artificial breasts to slap guys in the face for $$$$$$.

While I acknowledge there is good and bad articles floating around.

But what I read stated ….she was arrested, charged, booked, bailed and released.

She still has a pending court date.

Daniels was arrested and is set to be arraigned on Friday at Franklin Municipal Court.

The arrest report states that officers in the club witnessed her “using her bare breasts to smack patrons,” …

“The officers also said they observed Daniels fondling the breasts of female patrons.”

She was reported to have assaulted an police officers.

She held the face of the female officer between her breasts and did this to a male officer also.

According to police reports she also “fondled the buttocks and breasts of another officer”.