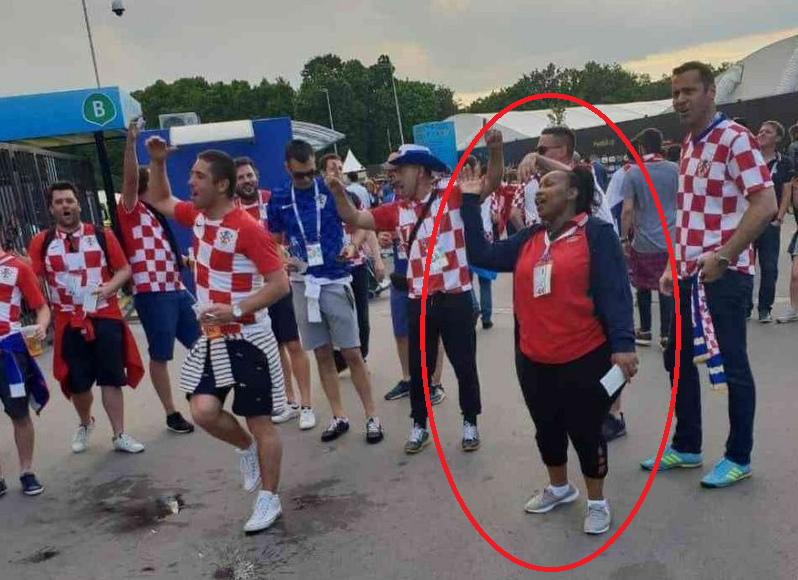 The African teams didn’t do all too well at this year’s World Cup in Russia. The participating countries from the continent Tunisia, Egypt, Morocco, Nigeria and Senegal were all eliminated at the group stages.

It was therefore strange to see so many Kenyan Members of Parliament show up at the World Cup, posting pictures of themselves on social media as they watched the semi-final between Croatia and England, a ticket that could easily set you back a few hundreds of dollars,

Kenya, which didn’t qualify for the World Cup, seems have sent over some 20 members of parliament for ‘research purposes’ on 2 and 5 June to stay in Russia and watch 5 games each of the Tournament.

We are going to guess that they had been instructed not to pose too many pictures of themselves but Senator Millicent Omanga was just over-excited getting to the semi-final yesterday she posed pics of herself between Croatian supporters.

The caption read: “With Croatia Fans before the Match Live from Luzhniki Stadium Moscow. Wishing them all the best.”

Senate Clerk Mr Jeremiah Nyegenye explained why the group had travelled: “It is their responsibility to understand sports, how to host such international tournaments. This is not a holiday and it is too simplistic to look at it as a joyrider mission,”

“From where we stand, this is official business, only that it is happening in Russia. Had it been happening in Somalia or even Uasin Gishu county, we would still have a team there.”

The trip supposedly cost hundreds of thousands of dollars. Kenya is highly in debt and its population is demanding answers as to why the politicians went to the Russian World Cup. They will have to wait though, the Kenyan delegation is scheduled to fly back on 16 July, the day after the final.