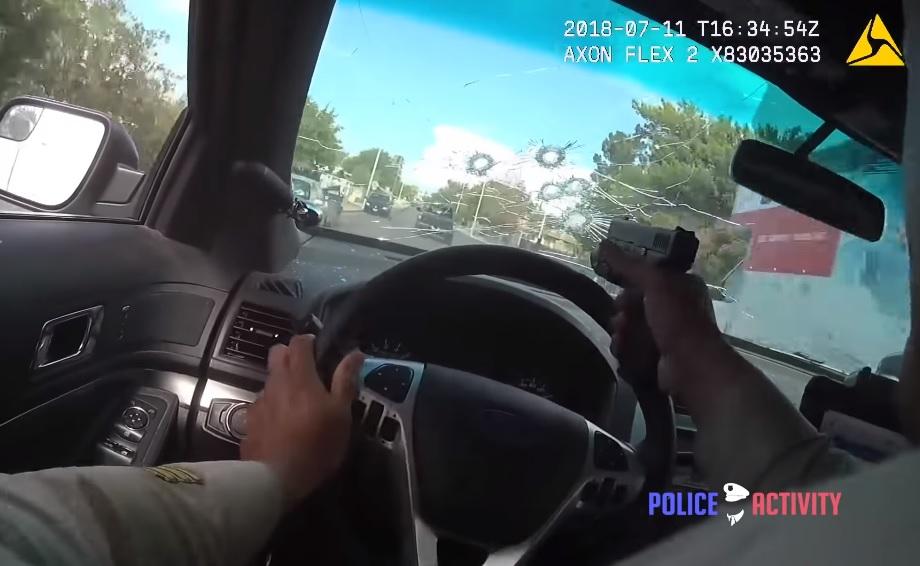 Watch: Insane Video of Vegas Cop Shooting at Suspects Through His Windshield

The Las Vegas Police Department released dramatic footage showing a shootout between suspects and an officer during a pursuit through downtown Las Vegas. Officer William Umana is seen pursuing a dark SUV and reporting to dispatch that he is taking fire from the suspect's vehicle.

The suspects were two men suspected of a homicide that took place on July 11. Officer Umana's body camera footage shows him attempting to target the suspects with his left hand out the window before electing to open fire right-handed through the windshield. Firing through windshields is usually allowed in department policy but poses some risks that make it a last resort.

Firing through a windshield with 9mm rounds, which appears to be what Umana is using, is a difficult prospect for such a small round. Often a 9mm will simply bounce off the glass or ricochet and in almost all cases, due to the angle of a windshield the bullet's trajectory is severely altered making it difficult to predict where the shots will actually go. Not to mention the bullet impact creates a webbing effect making it difficult to see through the glass.

The suspects were identified as Fidel Miranda and Rene Nunez and both men fired a total of 34 bullets at police. Officer Umana bravely sticks with the suspect's vehicle and continues to return fire until they crash. Officer Umana then gets out of his car and engages the suspects at close range. Miranda attempted to reverse the vehicle toward officers at which point he was fatally shot. Nunez tried to flee on foot and was arrested shortly after.

Both men were armed and were wanted in connection with a homicide that took place just two hours prior to the shootout. The two men allegedly shot and killed a man at a Las Vegas car wash.

In this case I believe that police brutality would be justified!

That was one hell of a video! At least it seems only the bad guys were hurt. Takes a lot of adrenaline to shoot thru a windshield a foot or two from ones face!

Crazy as it sounds and looks….

the officer is able to aim safely to RETURN Fire which lead to the arrest of Fidel Miranda and Rene Nuñez.

I do have issues with any officer firing that many round in a public area unless he has a clear target .

Since the 2 THUGS fired a total of 34 rounds at police.

This mean one them had a extra ammo mag. and reloaded.

OR had a weapon with that allowed more than 15 round mag. to be used. like a Glock 9mm extended Mag 20rd

In short they planned for a fire fight.

Shooting thru the window was what stopped these Murders…

Why is the 911 operator constantly asking "ARE YOU ANGRY?"

Hell ,….. if some one was shooting at her … do you want bet she would be pissed?

31601 - the glock extended 9mm mag is 32 rounds and thug gangbangers think they are tacticool so it could have been a 32 and the other idiot might have had a pistol as well.