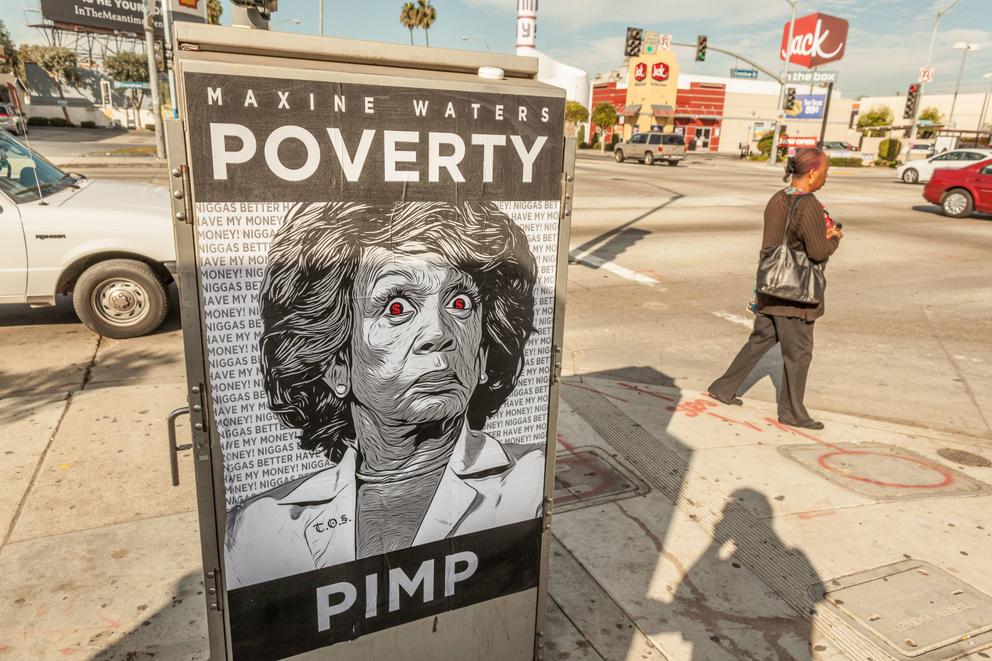 The “low IQ” Representative Maxine Waters (D-CA) went before her congregation at the First AME Church in Los Angeles, California to proclaim that God had sent her to take down President Trump, showcasing Trump Derangement Syndrome at it's finest.

In a fourteen-minute long hateful tirade against the 45th President of the United States of America, the rabid lips of Maxine Waters continue to spew vile disdain for the highest office in America, <i>and this happened in a church</i> of all places.

“I just want you to be sure, that you understand, that we're in a very difficult time, in this history of this country,” Maxine Waters said. “We've never seen anything like we're witnessing today. We never dreamed we would have someone in the White House who is divisive, who did not tell the truth, and is intent on not ‘making America great again,’ but taking America down.”

The crowd, unsurprisingly, roars in applause.

“I am in this fight,” proclaimed Maxine Waters, as she suggested her opponents were out to “intimidate me and frighten me,” without showing any evidence.

These people believe that the very woman who called for the harassment of Trump supporters are somehow under attack by the innocent, and law-abiding Trump supporters who go to work every day and don't care about the mindless protests of the left.

The flat-out insanity of the hateful Maxine Waters is hard to listen to.

“He was elected not with a popular vote, but with the electoral college,” Maxine said, not realizing that this is how the Democratic elections of our Constitutional Republic have always been decided. “And so he's here, and we're witnessing a scandal every day.”

She also blasted Senate Minority Leader Sen. Chuck Schumer (D-NY) and House Minority Leader Rep. Nancy Pelosi (D-CA), saying they've told her to “tone it down,” screaming that “I’ve said that we can walk and chew gum at the same time.”

Remember, this is the same woman who told Democrats to harass Trump supporters, saying, “You tell them they’re not welcome anymore, anywhere.”

The lies being spewed from Maxine Waters are obvious to most of us, but apparently, they're not when it comes to the 43rd District of California.

The 43rd District of Maxine Waters is so far detached from reality, impoverished, and suffering, <i>while she lives in a multimillion-dollar mansion</i>, and they still can't seek 5i realize that it's the Democratic Party of which 8s responsible for their suffering.

They just had eight years of Barack Obama, and nothing changed for them, so now they're instead filling their hearts with hatred for President Trump whereas they could vote a Republican into office that would restore the sanctity of prosperity to the 43rd District.

Omar Navarro stands the best chance of defeating Maxine Waters in the upcoming November race, but even then, he has major hurdles to climb in his attempts.

Social media support from around the nation alone won't change the minds of the 43rd District, whereas we hope to see on-the-ground action to let the people in his community understand he cares about changing their lives.

She continued her ranting, suggesting that Vladimir Putin and Russia was responsible for President Trump's victory, screeching about foreign meddling.

I can't get over the fact that this went on in a church, but apparently in 2018, politically charged rhetoric is acceptable to those inside such a congregation. It's legally not allowed, however, as it's a 501c3 non-profit church, but I doubt we'll see anything happen as a result.

Unless you're a mind-reader, I'm pretty sure you don't know what anyone is going to say, but hey, that's common sense and logic, something the Democrats do not have.

“They take people's children from them. That is wrong; I don't care whose children they are. Where they come from, we must stand up for all children,” Maxine Waters says in defense of illegal aliens, forgetting Barack Obama's policies were identical to President Trump's in regards to immigrant children.

Since she's concerned about children, maybe denouncing the Democratic Party’s pedophile elites who molest children would be important to mention? Of course not.

The infamous sycophant of the Democratic Party, “Mad” Maxine Waters, has made her hatred of President Trump well known in recent months. She has been exposed alongside Representative Keith Ellison (D-MN), who is also the number two in charge of the Democratic National Committee, for their support of the anti-semitic Nation of Islam black supremacist organization, which also has called Caucasian Americans the “white devil,” via leader Louis Farrakhan.

Maxine Waters is a vile individual, but it doesn't get much more disgusting than that of Nation of Islam leader Louis Farrakhan, who has for years cheered on the impending death of Americans based upon their skin color.

Such bigotry and racism are commonplace in the Nation of Islam, but the reports that Maxine Waters was in attendance for the Nation of Islam's conference back in 2002 in California where he tried to defend the actions of suicide bombers in Palestine who took innocent lives in Israel.

It doesn't matter where you stand on the Middle Eastern disputes of the so-called "Palestinians," and Israel, arguing that there is somehow a defense for killing innocent people isn't just insanity, it's essentially supporting terrorism.

However, we've uncovered even more of these instances where Maxine Waters was in attendance with the despicable Louis Farrakhan, including a Congressional Black Caucus meeting in 1993 where Waters sad on the panel alongside the Nation of Islam leader.

This is commonplace amongst the Muslims of the Democratic Party, which hold an overwhelming contempt for Christians and all people who don't bow before Mohammed.

It's caused such rifts amongst the left, which Democrats such as Bill Maher have publicly lambasted Democratic Muslims such as Representative Keith Ellison (D-MN) for the disgusting verses of the Koran which encourage the death of innocent people.

Keith Ellison, who's also the Deputy Chair of the Democratic Party, has also been exposed for his meeting with Louis Farrakhan back in 2013.

As reported a few months back in the<a href="http://www.washingtonexaminer.com/keith-ellison-cant-shake-questions-on-2013-dinner-meeting-that-louis-farrakhan-also-attended/article/2649390"> Washington Examiner</a>, Louis Farrakhan said in a 2016 Facebook post, that both Representative Keith Ellison (D-MN) and Representative Andre Carson (D-IN) both made a personal visit to his hotel room in Washington.

Yes, the same Louis Farrakhan who said that “you see, White people deserve to die.”

In fact, Frontpage Magazine reported a brilliant exposé on Keith Ellison where they've detailed the 11-year-old history between Ellison and the Nation of Islam.

<blockquote>"If you listen to Ellison, which the media does, his time with the Nation of Islam, a violently racist and anti-Semitic hate group which believes that white people were created by a mad scientist and will be exterminated by UFOs, was a brief youthful mistake that he made back when he was a college student."</blockquote>

<blockquote>” But Ellison appears to have been involved with the Nation of Islam for eleven years, from his time in law school to his early attempts at seeking public office, through his twenties and thirties."</blockquote>

It really shouldn't surprise anyone that the Democratic Party’s loudest mouthpieces are filled with such hatred and bigotry, knowing that most of them engage in support of the Nation of Islam, and the vile remarks of Farrakhan towards Jewish and Caucasian Americans.

It isn't just Frontpage that has reported on Keith Ellison's racism.

<a href="http://dailycaller.com/2016/11/26/keith-ellison-once-proposed-making-a-separate-country-for-blacks/">The Daily Caller </a>once reported a story that describes Ellison's call for a "separate country for Blacks," which further underscores his bigotry.

Racism, bigotry, and hate are just commonplace within the Democratic Party, and the record clearly shows this.

Supporting Farrakhan, however, is the straw that broke the camel's back.

Farrakhan has an endless history of anti-semitic rants as well as that of his endless support for Islamic terrorists.

He's often been captured on film referring to the "satanic Jews" and encouraging his followers to unite against Jewish people.

Much of these remarks have caused Farrakhan to become considered one of the "most hateful people on the planet," and this is who the Democratic Party's leadership defends.

It's beyond disturbing. It's not just Jewish people who've been a target throughout the years of Farrakhan, who has continued to refer to White Americans as "the White devil," in his anti-white rants against innocent people he has never met.

Such a display of hatred for anyone who isn't an Islamic Black American is by definition "Supremacy," making him at-best an extremist Muslim, and Maxine Waters attacks President Trump while thinking this is okay?

Racial divisions such as this can only be supported by the Democratic Party’s bastion of elites, with the likes of Maxine Waters no doubt affiliating with this hatred, based upon her meetings with Farrakhan.

For the moderate Democrats or fans of Barack Hussein Obama, you should also know Farrakhan isn't a fan of Obama or at least publicly has attacked him as well, even after being seen on Camera with Obama, in an image that was intentionally kept from the general public by the liberal media.

Louis Farrakhan once referred to Barack Obama as "America's first gay President," in a disturbing rant against the man he's been photographed beside in the past.

It seems as if Farrakhan is just vile by nature, and this is what the Democratic Party's leadership and Maxine Waters deems as acceptable to surround yourself with.

While the “Mad” Congresswoman, Maxine Waters spreads her hatred of Trump, pointing fingers at Trump supporters, remember, this is who she is, and who she affiliates with.

The Democratic Party’s ability to manipulate the public hasn't changed, and they're quite talented at succeeding with this tactic.

What Maxine Waters isn't talented in doing, is providing a better life for her constituents, like all Democrats, who instead spew bigoted propaganda to acquire votes.

This is why it's important to help the Omar Navarro campaign, and hopefully, be can cut Waters down in November with a historic victory.

"The Worst of Maxine Water"

Crazy Maxine was trolled on the phone by two Russian pranksters too . Video in youtube if you are intetested.

And I thought the KKK was bad they haven't got shitt on these racist demons! I'll bet farrakhan is maxine's hero. When the LA riots happened she said burn baby burn! That's a congressman!? The 43 district must be insane or just love punishment to electe her year after year! Major low IQ's

Another scummy Democrat bullshitting the herd.

Honestly, how stupid do people have to be to not know that the democrats are stoking these fires to regain power. That’s all this is about. A power grab.

The DNC failed miserably at the polls in the presidential race in spite of their best efforts to foment division among the different races and economic strata. They lied, spread disinformation, manipulated language in the media and so many people bought it.

The amount of evidence of graft and corruption is staggering. Clinton’s got more bodies on her than 3 mob bosses. Lies through her teeth, takes campaign contributions from UAE countries, all the while spouting off about women’s issues and pretending to give half a shit about homos. She is a political opportunist plain and simple. Fifteen minutes on google would be enough to raise doubts in any sane person’s mind, but nope, just read the clickbait headlines and regurgitate whatever bullet points are trending at the moment. These dumb shits are getting played like a fiddle and have their heads buried so deeply in the ass of identity politics that not even critical thinking can find room. Some of these assholes really should take a look at the voting records of the Democratic Party vis a vis civil rights legislation sometime.

FALSE PROPHET. IF GOD TRULY SENT HER TO STOP TRUMP, HE WOULD NOT HAVE BEEN DULY ELECTED BY THE PEOPLE. LONG LIVE TRUMP!