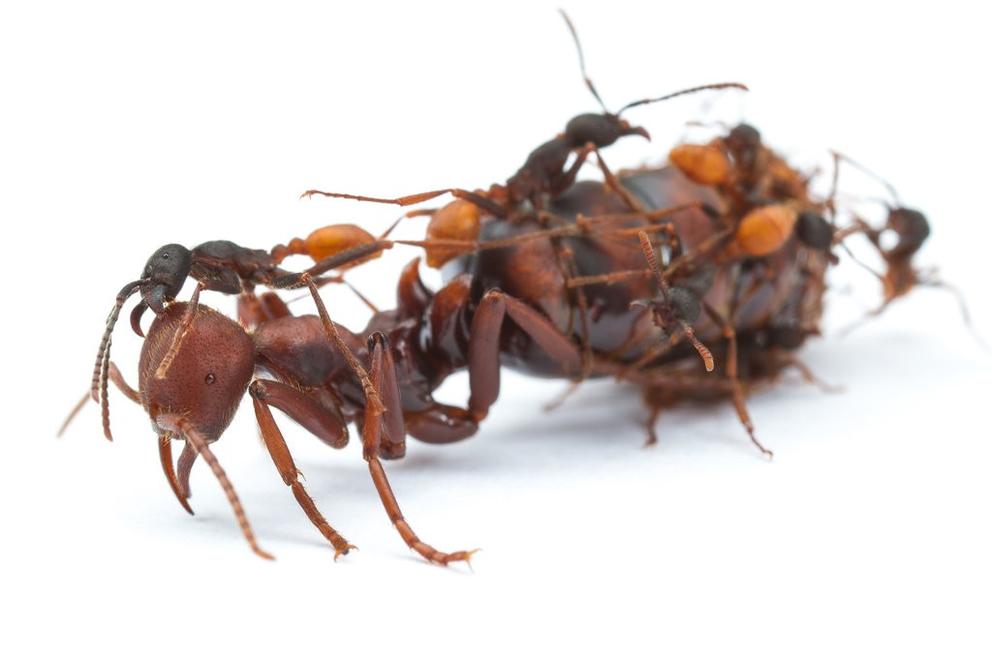 What Separates the Queen From The Drones

What's the difference between a common worker ant and the queen? Besides being multiple times as large and living up to 20 times as long the key difference may be down to differences related to insulin signaling. Genetically the two ants are literally identical but a slight difference in metabolism can lead to drastic differences not only in physiology but in the role played in the individual ant's role in the social structure.

A similar situation exists in multiple insect species. Eusocial insects feature sterile workers, or "drones" and "soldiers." Scientists rank eusociality as the highest level of organization in animal sociality. The behavioral organization of eusocial societies result in highly specified functions for each member, the divisions are often referred to as "castes." Though eusociality can occur in crustaceans and mammals as well, it is most studied in insects, specifically Hymenoptera such as ants, wasps and bees and Isoptera (termites). With all these insects it is the queen that is responsible for reproduction.

In the case of eusocial insects, such as the varieties of bee and ant species who have queens. The workers, drones and soldiers tirelessly performing menial labor while the queens are protected and pampered. A new study involving the clonal raider ant (Ooceraea biroi) worker ants had their ovaries activated through a hormone. In the end the whole difference was chalked up to a difference in insulin levels.

Queen larvae consume more in their early stages than drones. If this study can be replicated it may show that it's higher levels of insulin-like peptides that relate to their greater appetites. Worker ants insulin levels drop when exposed to ant larvae as well. This triggers a desire to seek food, which is then fed to the larval young.

In humans insulin is released into the bloodstream when we eat. It's this insulin that allows sugars to be metabolized into energy. In the case of the ant studied, this peptide seems to possibly be responsible for longevity, metabolism and reproductive capability.

The scientists involved in the study are working on studying how genes and behavior are related in insects. If the study can be confirmed through future replications it is likely that ants and wasps will be shown to have evolved via a similar pathway. The difficulty will be in analyzing the genes themselves. Over half of the key genes identified in the study have multiple other roles apart from insulin signaling.

I find it interesting that Edmund O. Wilson controversially claimed that humans were a eusocial animal. One of the main arguments against that was that humans don't have sterile caste. To be fair, this was before terms like "NEET" and "incel" had entered the vernacular.

Scary thing is, I can totally see scientists wanting to use some sort of Brave New world style gMOD to create a hyper-stratified, scientifically controlled society.