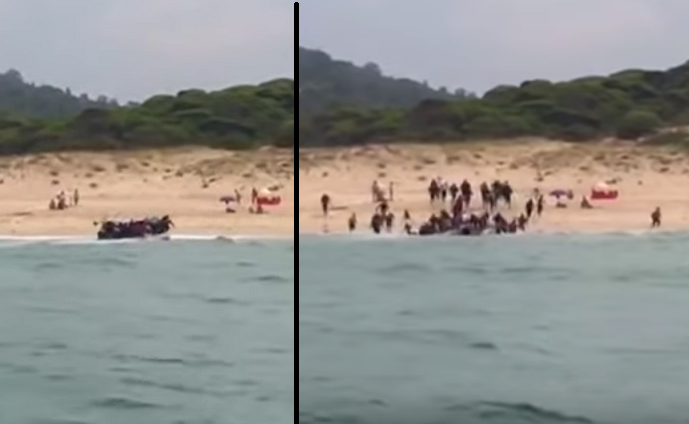 A strange sighting this weekend as on one of Spain’s nude beaches, a boat carrying some 30 illegal African migrants arrived directly from Morocco, surprising the mostly western European tourists as the group landed on the beach and ran to the forests behind it, all the time being chased by the Spanish ‘Guardia Civil’.

The events took place near the Spanish port city Algeciras but are by no means anything out of the ordinary as of late.

Both the decision by the right-wing Italian Interior Minister Mr Matteo Salvini to close his ports for migrant ships and the socialist Spanish Prime Minister Mr Pedro Sanchez to accept a 600-people carrying migrant ship (the Aquarius, see our related coverage) that both Italy and Malta had refused, means that African illegals now consider Spain as the new Walhalla and that the Iberian peninsula is currently being completely “overwhelmed” by a dramatic rise in the number of migrant crossings.

Related coverage: <a href=" https://thegoldwater.com/news/29028-Spain-Migrant-Boat-Arrives-In-Valencia-Where-65-Of-Citizens-Are-Opposed-Video"> Spain migrant boat arrives in Valencia where 65% of citizens are opposed</a>.

It went so far that the union for Spain’s Maritime Rescue agency issued an urgent call for additional resources to help it cope with the “massive arrival of immigrants” on the country’s beaches, which are currently packed with European tourists.

In the past week alone, some 1,600 migrants arrived on the Southern beaches of Spain, as the Spanish coastguard pulled no less than 627 people from 35 rafts in the Strait of Gibraltar alone.

The cities of Murcia, Almeria, and Malaga now regularly see illegals sleeping in their streets at night as the surprised tourists try to make their way back to their hotels.

According to statistics from the International Organisation for Migration, some 21,000 people arrived already this year, meaning Spain has now become the number one illegal immigrant destination in Europe.

Though Italy will be glad having passed on that title, the Spanish citizens themselves are not too happy about it. Whereas many fear it will stretch their already tight budget (reception centres are saturated, and migrants are being forced to sleep in converted sports halls) others, who work in the tourist sectors, fear that the cash-rich Western Europeans currently vacationing on their beaches will go elsewhere next summer if this ‘invasion’ continues.

Elect a weak government and this is what you get

Don't they read history? The raghead horde already invaded Spain and it took damn near 700 years to get those fuckers out.