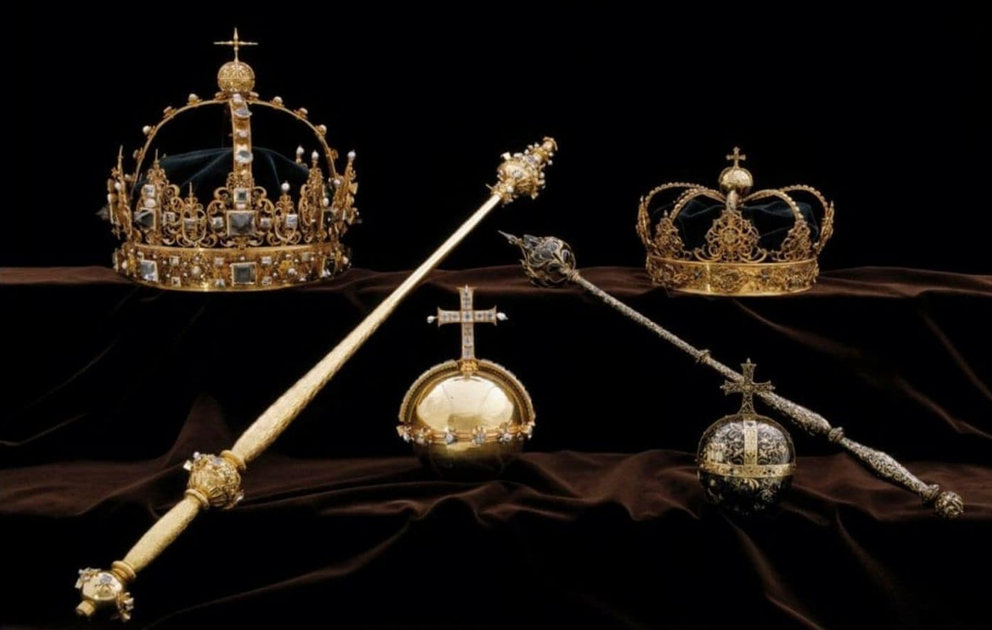 Talk about a plot for a Bond movie. Thieves in Sweden were able to steal the priceless royal crown jewels from a museum and made a getaway with a speedboat.

Two crowns and a royal orb were taken from a museum inside Strangnas cathedral by two thieves around lunchtime in a daring daylight robbery. The thieves simply smashed the glass cases holding the priceless artifacts and then took off.

Even though the alarms sounded, the thieves were well organized and managed to escape in a speedboat that was waiting, leaving security forces in the museum helpless to pursue them.

A witness told Swedish daily Aftonbladet: "I saw a little, white boat and the men jumped in the boat and sped away."

Swedish police declared that they launched a manhunt by land, sea, and air, but until this point, the robbers have not been caught yet.

Police spokesman Mr. Thomas Agnevik: "the score is 1-0 for them right now, but we don't know what it will be like tomorrow."

The normally calm and retained Swedes reacted furiously to the news, with some on social media stating that ‘execution’ would be the only desirable outcome if the thieves are ever caught.

Church dean Mr. Christofer Lundgren hinted that although the items were insured, they were of such value that the thieves would have no problem selling them to collectors: "These are items that are completely unique, well-known … in Sweden and probably even internationally."

The two crowns and the orb were made of solid gold, pearls, and other precious materials. They belonged to the Swedish rulers of the 17th century, Charles IX and his wife Christina. The cathedral is located some 37 miles west of the capital Stockholm.

Sweden seems to be coming apart. Unless they begin to value their nation, culture and nationality the will cease to be a country before long.

Sweden has certainly invited the viper in to share the living room… And if they turn out to be Muslims, as is normal these days they will be let off with little effort. A practice that the UK and the EU have taken up as well…..

This was done by design to demoralize the Swedish people further.

It wasn't about the jewels, it was about conquest.

For additional questions, more details about this online payday loans burwell ne Loan, or concerns about our product, please call our Customer Care team at. ACE is one from the largest check cashing services in the United States. People can quickly fall into a debt trap, borrowing more to generate repayments or falling behind on priority bills like council tax or energy. It has known security flaws and a limited feature set. At exactly the same time, it brought along massive unintended consequences. Unfortunately, Bourne isn't overly hopeful that the forthcoming CFPBreforms will bear much fruit in Ohio due to one last Buckeye State loophole: the CSO statute. Rather than pushing for a federal law, reformers campaigned for your uniform law's adoption over a state-by-state basis. A Pew Research Foundation study released in 2013 found out that a borrower getting a $375 loan eventually ends up paying $520 in interest and costs, including obtaining new loans to pay for off previous loans over the common 10 month life in a very typical borrowing cycle. Usually, these contracts are within large transactions, like getting a house or even a car. We aren't direct lenders, however, you can expect access to your varied amount of short-term loan products from your highly qualified lenders.

But within a gathering of more than 100 members and supporters with the Mayor's Women's Council in Brainerd, many suggested the location should do more by alerting borrowers to the problems with payday advances on business signs and urged Tennessee's legislature to check out Georgia, North Carolina and also other states which may have set stricter usury limits about what lenders may charge. He points to Colorado being a model for Ohio and also other states to check out. Congress could turn to overturn the rule ' but some say that's unlikely. Pew would like to begin to see the CFPB limit loan payments to five percent in the borrower's paycheck and hang up a 'reasonable time frame' for your term of this loan of at most six months. The defendants are presumed innocent and they are entitled to some fair trial at which the government gets the burden of proving guilt beyond a good doubt. This year's version allows the check cashers to generate small business loans ' but the check includes no mention of underwriting standards. When Robideau first spoke to NPR back in 2001, payday loans north charleroi pa lending would be a $14 billion industry. It says almost half of the areas have five or even more of these operations, while about three-quarters of Texas ZIP codes have none. The expected dollar level of each payment the borrower will make in order to spend back their loan and remain current. Statistics since then tend to be difficult to get because, Policy Matters says, the way through which lenders are categorized is constantly changing.

On a short-run or one-time basis this may be considered a viable option for a few people, but on the longer term basis this is really a very expensive form of credit. Members from the committee said there is often a need to impose some sort of the cap on interest levels, but many with the same time expressed hesitation about setting the limit at 175 percent. The last restrictions passed on Kentucky's payday loans brick nj loan industry, within the late 2000s, limited borrowers either to $500 or two loans at any given time. The Democrat offered some insight about why state legislators haven't tightened regulation from the short-term lenders. This allows you to pay off bills on the longer period of energy. Borrowers usually give their bank account information to the payday lender, that will debit the owed money through the borrower's account when due. Freakonomics (R) can be a registered service mark of Freakonomics, LLC. This is not the type of debt people take on to boost their earning potential, as being a business or student loan. Then, on your own payday, the financial institution cashes your check until you extend the money. Over 36% had greater than 20, and some had a lot more than 30.