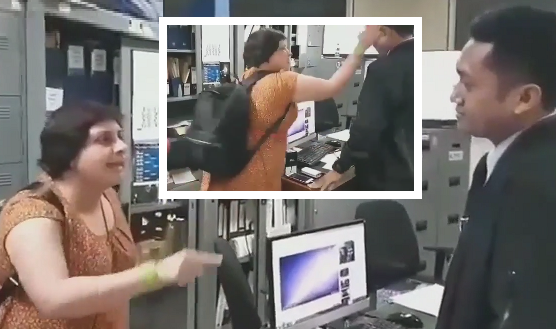 After seeing the following video, which I imagine will soon go viral, I tended to draw two conclusions: firstly, that person seems to not be aware that it’s never a good idea to slap an immigration officer in an Asian country and secondly, if you overstayed your visa for that long, how much vacation do you have? Or are you by any chance on benefits?

Here’s the story. Ms. Auj-e Taqaddas, a tourist with British nationality, arrived at Ngurah Rai International Airport in Bali, Indonesia this weekend. After receiving her boarding pass for the flight back to Britain, with a stopover in Singapore, the local immigration officers noticed that she had overstayed her visa and, importantly, that they had sent her several letters to remind her of this.

42-year-old Ms. Taqaddas had in fact arrived around the new year already. Her one-month tourist visa had expired on 18 February after which immigration sent her a letter, warning that she needed to regularize her visa or pay a $25 fine for each day she overstayed. Another letter was sent one month later, and so on.

In the end, Ms. Taqaddas stayed illegally in the country for more than 150 days which amassed to a $4,000 fine.

The immigration officers told her to pay or she would have to miss her flight. As she was unable to do so, she needed to run off to a local bank and arranged a cheque. Returning to the airport, she found that she had indeed missed her flight and got into a fit of rage versus the immigration officer whom she paid the money to, slapping him in the process (an illegal offence in Indonesia, and, for that matter, I’m going to guess in any other country as well).

She stated: “You aren't paying for this f*ing flight. You b*ds told me to bring the money, why didn't you b***ds tell me anything else.”

Ms. Taqaddas was taken to an immigration holding cell in the meantime. The British Foreign Ministry did not want to comment.

Immigration Chief Mr. Ngurah Rai Aris Amran afterwards explained that: “Based on the results of immigration checks, Taqaddas arrived in Indonesia with a visit visa-free facility on January 19, 2018.”

“That is, the owner of the passport has exceeded overstay in Indonesia for more than 60 days. She pretended not know that she had overstayed. But people who visit a country to travel know they have a period of stay. She had overstayed since February.”

HOW CAN SHE SLAP

She's not British…she's a transplant who behaves like the third world trash she came from.

Ha! Get that tnuc the frig out of blighty please!

if she overstays her visa in the USA they'd give her free money, room and board and NPR would do a sob-story about this poor poor woman….