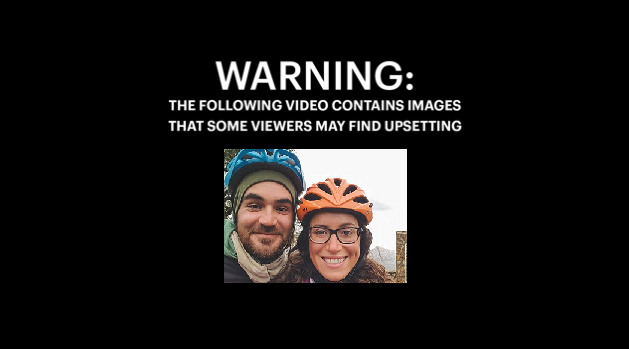 The two Americans killed in the ISIS claimed terror attack in Tajikistan have been identified as Washington DC couple Mr Jay Austin and Ms Lauren Geoghegan, who had both quit their jobs to bike around the world for a year.

They were part of a group of seven cyclists that was heading north in the Danghara district (some 55 miles south of the Tajik capital Dushanbe). in the video that has since surfaced on the internet you can see several cars attacking the cycling group.

According to declarations from Tajikistan’s Interior Minister, the car first drove into the group and then attacked them with a firearm and a knife.

The American couple was killed along with a Swiss man and a Dutch national.

<blockquote class="twitter-tweet" data-lang="en"><p lang="en" dir="ltr">Islamic State has not just claimed the terrorist attack in Tajikistan which killed 2 Americans, along with 1 Swiss and 1 Dutch national, but has also released a video of the attackers. Some thoughts to follow… 1/ <a href="https://t.co/XQxEbhsLpx">pic.twitter.com/XQxEbhsLpx</a></p>&mdash; Shiraz Maher (@ShirazMaher) <a href="https://twitter.com/ShirazMaher/status/1024247952934621194?ref_src=twsrc%5Etfw">July 31, 2018</a></blockquote>

The aunt of Ms Lauren Geoghegan posted a message on social media earlier this week, confirming the couple’s identity. She said: “On Sunday my beautiful and beloved niece Lauren Geoghegan, 29, and her amazing boyfriend, Jay Austin, were tragically killed while adventure cycling in Tajikistan. They were the target of a horrific terrorist attack. There are no words. Our family is shocked and devastated by this senseless loss.”

“Lauren and Jay chronicled their journey and experiences with fabulous photographs and captivating blogs. In tribute to them, I invite you to visit their website so that we can remember them for the dream they were outrageously living out and not the way they died. Thanks for your prayers at this time. We need them.”

Strangely enough, the couple’s travel blog had recently spoken about the idea that they could be killed on their trip. During a Q&A segment, they admitted: “Relatively speaking, bike touring is really safe. Despite what the news would have you believe, the world is a really wonderful, caring place, and stories of kidnapped travelers or mauled cyclists are the rare exception, not the norm.”

“The greatest danger to us—any of us, really—are humans in cars, who kill more people than anything else in the world. We keep an eye on news reports, monitor trends, and choose routes that minimize risk, but don't avoid it altogether (as, obviously, that's impossible).”

Jeanne Santovasco, mother of Jay Austin, said her son was “just a gentle soul, who cared about the world, not leaving any footprint and leaving it a better place.”

just evil, no doubt about it

(((They))) didn't like the retards quitting their jobs, so they made sure their travel agencies sent them where they can no longer be a problem.

If we let more of these religious fanatics into civilized white Christian countries they will stop killing right? Wrong!! They are animals that will need to be treated like an infestation of cockroaches. Maybe luck will be on peace’s side and they will contract something like aids but faster acting and untreatable from fucking goats?

Two dangerously naive leftists who thought the world was all rainbows and skittles. Typical U.S. college graduates actually. The Marxist's have to be cleaned out of our Universities if American children are to learn how life really is.

What proofs more people are evil than a couple that want to proof, people are kind gets killed for no reasen?!