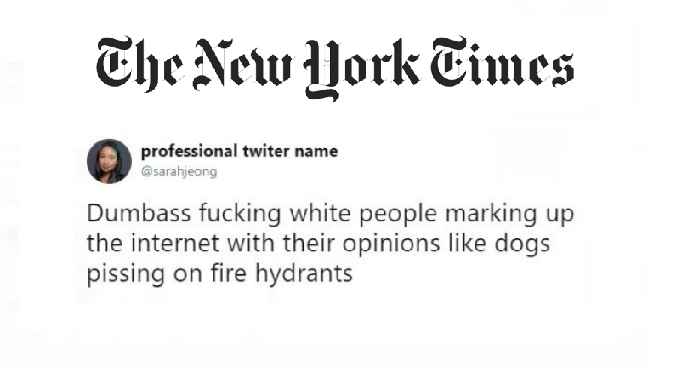 Whereas Mr. Jim Acosta was complaining this week about the ‘CNN Sucks’ chant he received at President Donald Trump’s rally in Tampa, we dare to wonder how the New York Times (or any other part of the mainstream media for that matter) will react to the unearthing of the twitter history of the newest member of their editorial board, Ms. Sarah Jeong.

Some of the beauties found online are being discussed online today. We urge you to have a look at it would seem Ms. Jeong is already in the process of deleting these:

- ‘Are white people genetically predisposed to burn faster in the sun, thus logically being only fit to live underground like groveling goblins’

Back in 2016, Ms. Jeong managed to get under the skin of Bernie Sanders supporters and faced so much backlash over her comments that she temporarily locked her Twitter account.

She has previously worked for The Verge, The Guardian, and Vice Motherboard as a contributing editor. Back in 2016, she tried to launch the hashtag #CancelWhitePeople, to no success.

The hire comes four days after the New York Times Publisher, Mr. A. G. Sulzberger and US President Donald Trump had a fierce public clash on social media over the perceived handling of the press by the current White House administration.

Whereas Mr. Trump firstly stated on Twitter that during his meeting with Mr. Sulzberger he had discussed “the vast amounts of Fake News being put out by the media,” the latter said that he had only accepted the US President’s invitation in order to discuss the

Mr. Sulzberger commented that he “told the president directly that I thought that his language was not just divisive but increasingly dangerous.”

Like Obama standng with the leader in Kenya while the black folks slaughter the white farmers. Are the liberals in this country just ignorant?

- ‘Are white people genetically predisposed to burn faster in the sun, thus logically being only fit to live underground like groveling goblins’

THEN SHE, AND THOSE OF LIKEMINDED PERSPECTIVE, MUST BE PREDISPOSED FOR THE PITS OF HELL'S FIRE.

Yet another formerly respected news source going the way of being totally dismissed as real news except for the lickspittle readers and those who manage to lick their lips between tirades.

She was abused as a child. Her real need is a plexiglass navel. The contortions she has to go through to get her head that far up her ( ! ) is amazing but I'm sure it would good if only to see the light of day! It's no wonder her viewpoints sound like hot brown butt mud. She'll make a fine addition for the used rag NYT. Stinky belongs with stinky.