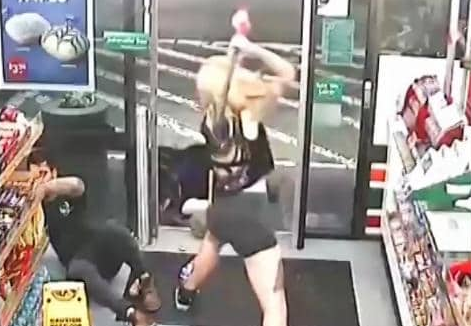 The trial of 26-year-old Miss (or is it Mr now?) Evie Amati who attacked three people with an axe (see the video in our related coverage) at an Australian 7-Eleven while high on a mix of drugs alcohol and hormones (to help her transition from female to male) has resulted in a logical guilty verdict.

At the time (she wishes to be addressed as a man again now apparently) Miss Amati, carried out the unprovoked attack in Sydney when she entered the 7-Eleven store at night, using the axe to strike a man in the face (leaving him with a gaping facial wound and several fractures) and continued to struck a woman in the back of the head (leaving her with a fractured skull).

Miss Amati pleaded not guilty as she argued experiencing a psychosis at the time of the attack caused by the various substances she had taken earlier that evening.

After two days of deliberations, the New South Wales District Court convicted her of all three charges.

Her second victim, Ms Hacker, explained to reporters afterwards: "I really hope that Amati is able to have some sort of rehabilitation because ultimately that's what justice is about.

"Making sure people become better people than what they could be at the time."

Ms Amati counsel, Mr Charles Waterstreet said his client’s mental health had started deteriorating she began taking hormones to transition from male to female. According to him, she had heard voices telling her to ‘start hell on earth.’

The jury did not agree.

Its official title is:

Schizophrenia, has approximately 1.2% and Autism in the US is 1.4% both many, many times higher that GID/GD.

But for a Mental Illness the Liberals wanted us to allow them to use ANY Dressing Room or Bath Room as they pleased, given how they felt that day as their MENTAL ILLNESS struck them?

You don't treat a MENTAL DISORDER with Hormones, as this occasional odd RAGE example proves.

Whoever thought these people weren't nucking futs need to be placed in the same bin of delusion.

The whole $hitshow looks crazy! Even the victim!