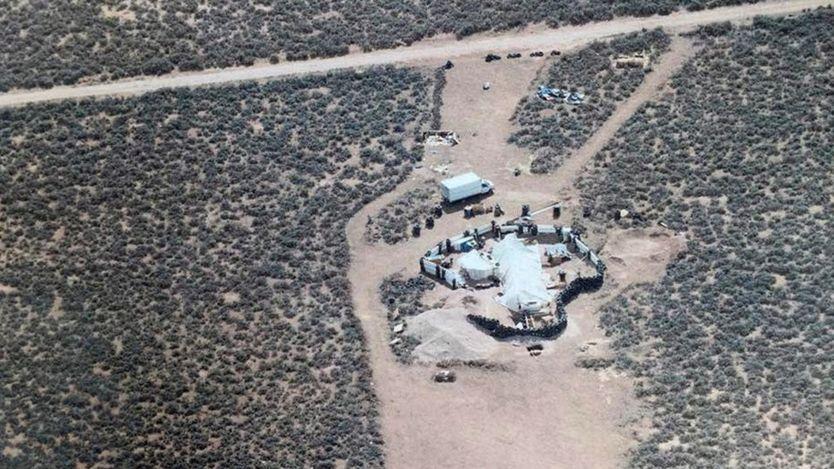 A compound in New Mexico without running water or electricity was raided by U.S. police who found 11 starving children and five adults. The local sheriff's described the children as being age 1 to 15 with no shoes and living in squalor. Sheriff's also described the rags they were wearing as making them look "like Third World refugees".

Two of the five adults at the compound were heavily armed but it is not clear how long the group was at the compound in Amalia. Police say the compound's living quarters consisted of a small underground trailer covered by plastic with no running water or electricity. Taos County Sheriff Jerry Hogrefe described the children as hungry, thirsty, and filthy.

"I've been a cop for 30 years. I've never seen anything like this. Unbelievable," Hogrefe said. "They were skinny, their ribs showed, they were in very poor hygiene and very scared." Authorities say there was no fresh water at the compound and the only things to eat were a few potatoes and a box of rice.

The two armed men identified as Siraj Wahhaj and Lucas Morten were both arrested. Hogrefe said the women and children "were brainwashed and feel great intimidation from the men that were in control of this facility". Social services have since taken the 11 children in their care.

Wahhaj was also wanted for abducting his three-year-old son but he was not among the 11 children found at the compound.

This is only the beginning of the stories we shall hear in the coming months. Please cover all you can so readers can spread far and wide. WWG1WGA

I guess I need to widen my reading circles again.

Was this a Liberal Ped Supply Shack?