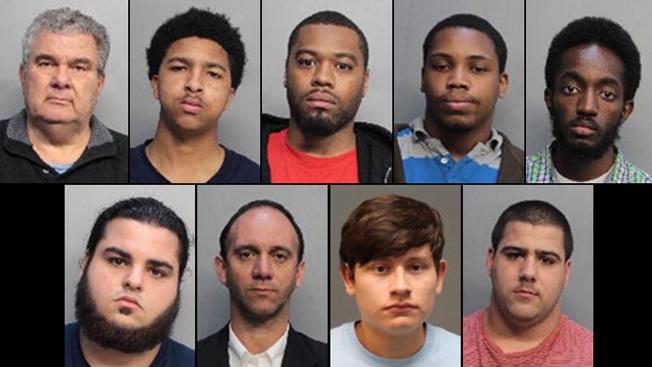 Law enforcement agencies in Miami-Dade have shut down a major child pornographic distribution ring in cooperation with the United States of America's Department of Homeland Security, where nine adult males have been taken into custody and one fifteen-year-old juvenile.

According to<a href="https://www.local10.com/news/florida/miami-dade/9-men-teen-arrested-this-year-in-child-porn-bust-in-miami-dade-county"> local ABC affiliate Channel 10 </a>in Miami-Dade, Florida, the Miami-Dade Police Department's Special Victims Bureau, the Internet Crimes Against Children Unit, special agents from Homeland Security Investigations, detectives from the City of Miami Police Department, and investigators from the Miami-Dade State Attorney's Office all worked together in cooperation for six months to bring down the child pornographic distribution ring, <i>which depicted infant children as young as nine-months-old being sexually exploited in order to produce and distribute images and videos of prepubescent children engaged in forced sexual abuse for profit.

Over the course of the six-month investigation, law enforcement officers were able to infiltrate the network of child pornographic distribution, having first taken a 14-year-old into custody in January, which led to Detectives further investigating the allegations of a major transmission network.

The fourteen-year-old child, who has turned fifteen-years-old since his initial arrest, assisted authorities in the identification of nine other adults involved in the illicit child pornographic distribution ring, which concluded this week after the execution of dozens of search warrants, subpoenas, and preservation letters.

<i>Those arrested as part of the joint law enforcement agency sting are as follows:</i>

The minor involved in the illicit child pornographic distribution ring is not being named, due to his age.

Each of the men named above are now facing multiple felony charges, including sexual performance by a child; possession/transmission of material harmful to minors; lewd and lascivious battery on a child; distribution of obscene to a minor; attempted sexual activity with a specified minor; using prohibited computer services; and promoting the sexual performance of a child.

Despite the arrests, the Miami-Dade Police Department believes that there could be countless unidentified victims around the state, and possibly around the nation.

"We need to as adults and responsible community members; we need to take this situation very serious," Miami-Dade Police Det. Alvaro Zabaleta said. "Simply because of the fact that somebody's watching child pornography people may think that's 'well they're just watching it, they're not doing anything wrong.' What they're watching is behind every video and behind every photo, there's a victim, and that's what we need to strive to stop."

If you know of any child who may have been a victim of sexual exploitation, please call the National Center for Missing or Exploited Children (NCMEC) at 1-800-THE-LOST (1-800-843-5678) or visit the<a href="https://www.missingkids.com"> NCMEC’s web site </a> where you can find assistance directly dependent upon the specific case you're interested in finding information for.

The suspects range in age from 15 to 67-years-old in this case, showcasing that the levels of perverse criminal activity which surround pedophilia could be anywhere in this nation.

If you or anyone you know has any additional information on the multiple pedophiles involved in this illicit child pornographic distribution network, or are a potential victim of their crimes, you're urged to contact Miami-Dade Crime Stoppers at 305-471-8477, that's 305-471-TIPS. Remember, you can remain anonymous, and you may be eligible for a $1,000 reward.