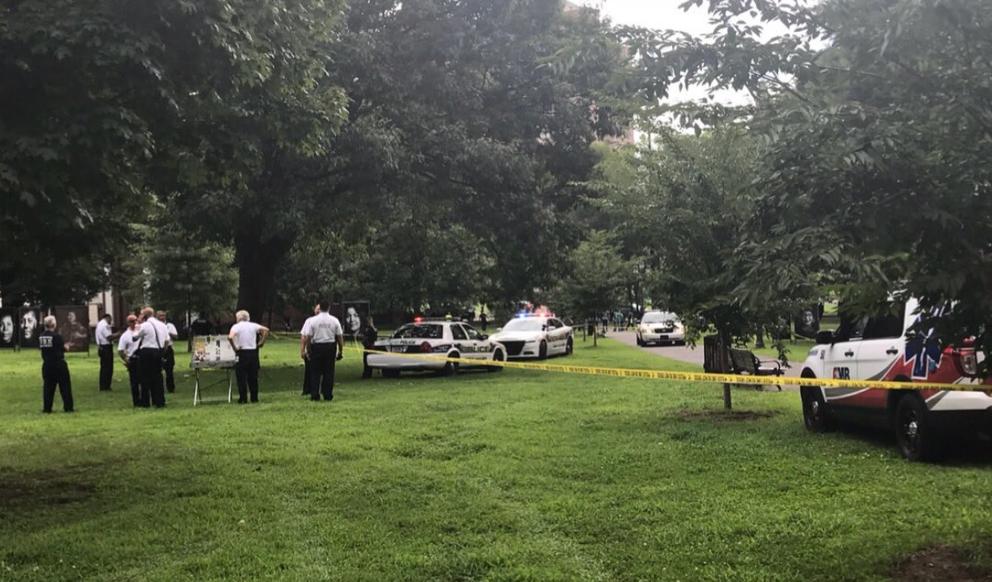 A 24-hour period saw as many as 46 people overdose in New Haven, Connecticut Wednesday, many of them were on the Green, a privately owned park in the city. Emergency crews were under immense strain to save the lives of the dozens who had overdosed. Police suspect a man who they arrested as a "person of interest" may be involved with the distribution of the drugs. Police Chief Anthony Campbell said the man is out on parole and is "known" to police.

Police say the overdoses are believed to be linked to the synthetic cannabinoid K2 and was laced with Fentanyl. At least 24 of those overdoses took place on the Green, according to Fire Chief John Alston. 34 people were taken to the hospital while another five refused to be treated.

City Office of Emergency Management Director Rick Fontana said police have been stationed on the Green since Tuesday. Emergency services also responded to at least three overdoses in other areas of the city and a source said the DEA confirmed they too were related to the synthetic cannabinoid.

A press release from the office of Mayor Toni N. Harp said as many as 46 "confirmed" overdoses took place in the city. "Today New Haven was on the front lines of a coast-to-coast struggle to combat the public health menace of illicit distribution and use of what appear to be tainted street drugs - as many as 46 cases are confirmed in the city since last night," Harp said.

Related coverage: <a href="https://thegoldwater.com/news/30113-Pennsylvania-110-Pounds-Of-Fentanyl-From-China-Intercepted-At-Philadelphia-Port">Pennsylvania - 110 Pounds Of Fentanyl From China Intercepted At Philadelphia Port</a>

<blockquote class="twitter-tweet" data-lang="en"><p lang="en" dir="ltr">New Haven authorities have transported people to the hospital at least 49 times today for overdose cases on the Green. Ambulances and cop cars are scattered around the park <a href="https://t.co/EXUnWzRCp9">pic.twitter.com/EXUnWzRCp9</a></p>&mdash; Clarice Silber (@ClariceSilber) <a href="https://twitter.com/ClariceSilber/status/1029870774998511621?ref_src=twsrc%5Etfw">August 15, 2018</a></blockquote>

Mayor Harp added, "I’m extremely grateful for the timely and effective work of first responders who helped revive, transport, and save these victims." Police and other emergency responders worked for hours to treat victims and transport them to area hospitals. Chief Campell told the public, "We are asking people to not come down to the Green to purchase what is K2. Clearly, there is a bad batch."

Campell added, "We really need to get to the heart of where this is coming from and who’s distributing and make arrests. While emergency personnel was giving an update to the press at 11 a.m. on the Green, another overdose took place. A bystander shouted during the conference, "We have a guy laid out in the alleyway, unresponsive, eyes wide open. He’s out cold." The patients were transported to Yale New Haven Hospital and the YNHH St. Raphael Campus and no deaths have been reported.

"While emergency personnel was giving an update to the press" brilliant, Major… Brilliant