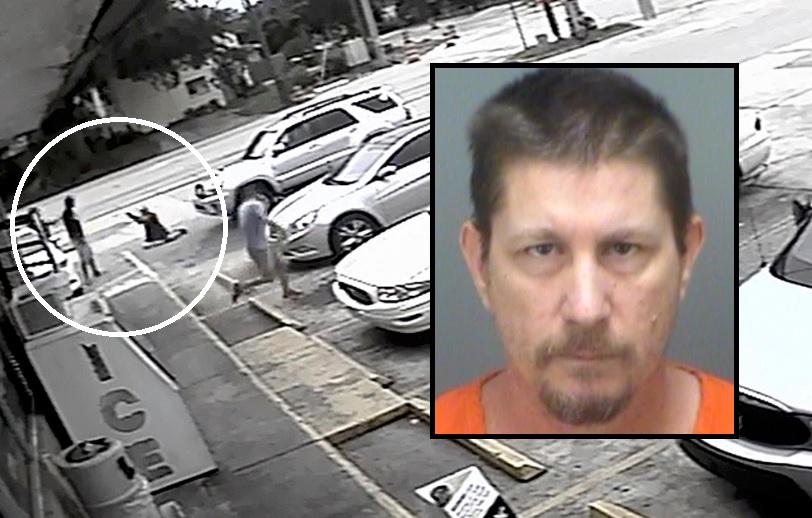 A man in Florida was entering a convenience store July 19 when he saw a woman parked in a handicapped spot but she did not have a handicap permit. Michael Drejka, 47, confronted the woman in the driver's seat of the van over her parking in the handicap space but as he was talking to the woman, her male partner came back out of the store and blindsided Drejka by shoving him hard enough that he was slammed to the pavement. While I don't agree with the commentary in this video, the video featured in this tweet shows the whole incident.

Related coverage: <a href="https://thegoldwater.com/news/31917-Florida-Gunman-Who-Fatally-Shot-Man-During-Parking-Dispute-Will-Not-Be-Charged-Video">Florida - Gunman Who Fatally Shot Man During Parking Dispute Will Not Be Charged (Video)</a>

After 28-year-old Markeis McGlockton shoved Drejka to the ground, he feared for his life and pulled out his handgun firing one shot at Drejka which struck him in the chest. McGlockton later died from the bullet wound. The whole incident was caught on surveillance video and shows the assault and subsequent shooting. Pinellas County Sheriff Bob Gulatieri said that he would not be charging Drejka and warned that if you assault someone you should be prepared that there could be consequences and the victim may be a concealed carry holder.

Protests sprung up surrounding the death of McGlockton and now, nearly a month later, the state District Attorney decided to charge Drejka with manslaughter. Detectives took Drejka into custody after a warrant was issued for his arrest and he was booked into the county jail on a $100,000 bond. Sheriff Gulatieri said of the decision to charge Drejka, "I support the State Attorney’s decision and will have no further comment as the case continues to work its way through the criminal justice system."

The family of McGlockton said they were elated with Drejka's arrest at a press conference. The family of McGlockton has retained Benjamin Crump, the same attorney who represented the family of Trayvon Martin. Crump said Tuesday, "It’s about time. This self-appointed wannabe cop attempted to hide behind 'Stand Your Ground' to defend his indefensible actions, but the truth has finally cut through the noise. I have full faith that this truth will prevail to punish this cold-blooded killer who angrily created the altercation that led to Markeis' needless death."

This big guy walks out and assaulted a smaller man who was complaining about a woman who is not disabled for parking in a disabled spot, Law broken there. Big Guy knocks smaller guy down No reason for it! Little guy shoots Big Guy because he's scared all in a few seconds No premeditation Color has nothing to do with it. Protecting your self from Harm.

I think it's wrong that the DA arrested him based on pressure from riots and protests … it was pretty clear in the video that the man followed the law as set forth. Now, because of outside pressure, how is that man supposed to get a fair trial? Obviously anyone living there is aware of what's in the papers and events in the area. Since the DA is a chickensh*t, the defense attny needs to file for change of venue.

yes, jigaboos are stupid but this shooting was unjustified. i have my concealed carry permit but i'd much rather defend myself with my fists. this poor baby got pushed and had his little feelings hurt so pulls a gun and gets even…. back in the 70's there was a thing called A FIST FIGHT. nobody died. you get your butt kicked, you learn how to fight. now we have cowards who carry a gun and can't wait for someone to give them a legal right to shoot. A PUSH! big deal….. The sheriff is wrong. it's possible that he's doing this to vilify SYG laws, i don't know. anyone with a brain can see that Mcglockton immediately retreats after the coward pulls his gun. then there is a substantial pause and the coward shoots. sorry, no you can't do that. btw: i'm a white guy who was attacked by blacks in the recent past.

When blacks headshot blacks its a non event. Hypocrisy.

"I have full faith that this truth will prevail to punish this cold-blooded killer who angrily created the altercation that led to Markeis' needless death."

Give me one handicapped juror to watch this bluster fall apart. Park in a handicapped spot, assault strangers, win stupid prizes.

"I have full faith that this truth will prevail to punish this cold-blooded killer who angrily created the altercation that led to Markeis' needless death."
Give me one handicapped juror to watch this bluster fall apart. Park in a handicapped spot, assault strangers, win stupid prizes.

As usual the media only reports the basics. I watched the video 10-12 times I was sure he was good on defending him self. The cops set up a 3D re creation of the crime scene and the guy was retreating and over 12 feet away when he shot. Then comes the reports of how this guy was harassing people all the time and yelling nigger at passing cars. Once the facts come out is the only time you should pass judgement. I was wrong this guy belongs in jail and his CCP taken Stand your ground is for protection not people to play cop