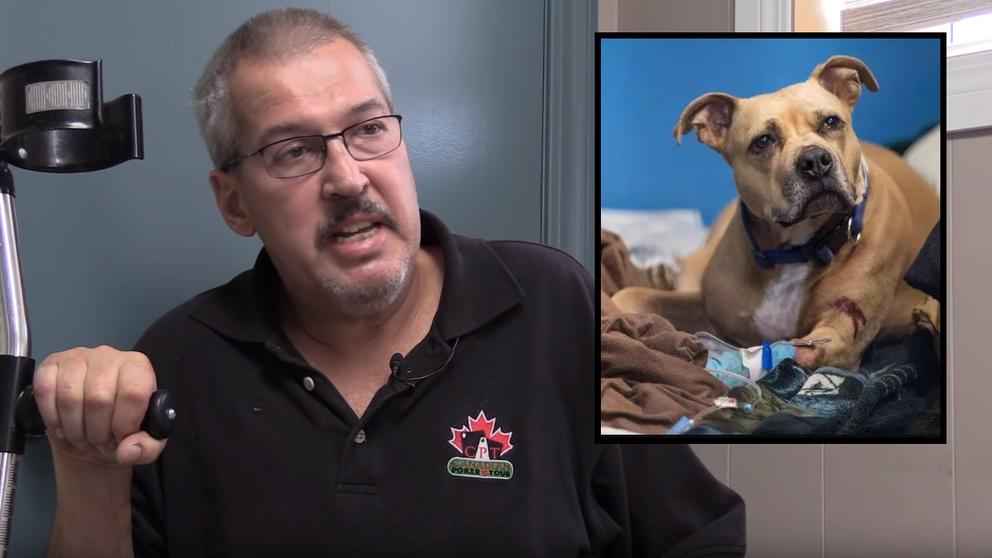 Around 25 dogs are shot by police every day in the U.S. for a total of around 10,000 dogs per year. Lance Murphy is a disabled dog owner and he never thought his beloved Missty would be in the crosshairs of an officer's gun but is just what happened in what he describes as the worst day of his life. "I don’t have anybody else. My dog is my life," Murphy said in an interview at the veterinarian office where his dog is being treated for gunshot wounds.

Murphy's dog Missty was shot by The Regina Police Service while he was walking her at a park. The disabled Murphy tearfully described how he was walking his two dogs, off the leash at a park that is not designed for dogs to be off their leash, when nearby RPS canine unit members were preparing for a training session in a fenced off area of the park. The officers were in the process of setting up signs to alert the public to the training exercises but had not yet done so.

An officer got out of his car and began walking toward Murphy. "He didn’t wave at me, didn’t shout at me, he was just walking through the field approaching my dogs and myself," he said. As the officer grew closer, Murphy shouted for his two dogs to return to him but that is when Missty, who had just fetched a ball, began moving toward the officer. Missty is an American Staffordshire Bull Terrier. "The officer at this time was about 40 feet away from me. He proceeded to draw his gun, and he still had not said anything before opening fire at my dog," Murphy explained.

Acting deputy police chief Corey Zaharuk said at a news conference in relation to the shooting, "I don't doubt for a moment that with her owner and family, the dog is seen as a loving, playful pet — but that was not how our experienced canine officer perceived the dog in the moments prior to the incident. The officer began sensing very troubling behavior from one of the dogs, who appeared to him to be assuming an aggressive posture and circling him. The officer felt that the dog's actions were consistent with preparing to attack him."

Murphy disputes the RPS's claim that his dog was preparing to attack. "My dog wasn’t barking or jumping or growling at the officer," he said. "She had the ball and she was running around his feet. It just should not have happened." The incident highlights a growing issue across America where dogs are being shot by police. One case where an officer fired at a dog while inside a family's home and struck a six-year-old girl in the eye. <a href="http://www.foxnews.com/us/2016/11/15/two-detroit-police-officers-shot-more-than-100-dogs-combined-report-finds.html">Another investigation of two Detroit officers</a> revealed they had shot more than 100 dogs between the two of them.

yeah and cops will sic their dogs on you for nothing, and they can't control them. there's way too many videos on Liveleak of a K9 chewing some poor guy's face off and it won't obey the cop's orders to stop. and of course if the guy defends himself from the dangerous animal mauling him, he'll go to jail for "assaulting a police officer" because the dogs are literally legally considered police officers. what a bunch of manchildren

using K9s to attack people should be considered cruel and unusual punishment and banned. sniffing is a legitimate and acceptable application for dogs but I don't want to live in a society where cops can break down people's doors and sic dogs on them and shoot them over slights. I get that blacks are all violent criminals and that's what cops are used to, but they shouldn't treat Americans the same way

About 20 years ago my friends 8 year old rottie was shot and killed in his own fenced in yard right under the living room window where my friend was sitting watching tv. The cops were executing a search warrent at his next door neighbors house and one cop climbed the fence to survey the raid from the yard adjacent when Zeus must have noticed a stranger in his yard and WALKED over to check it out. It was then that the pussy cop pulled his pistol and unloaded 4 rounds into Zeus killing him instantly. The dog was well known around town and the outrage was intense but nothing happened to that trespassing cop that should not be allowed to carry a gun as he’s skittish and nervous and immediately resorts to deadly violence. I wonder if Zeus’s owner would have been charged if he blasted that shitbag cop for trespassing and killing his beloved dog?