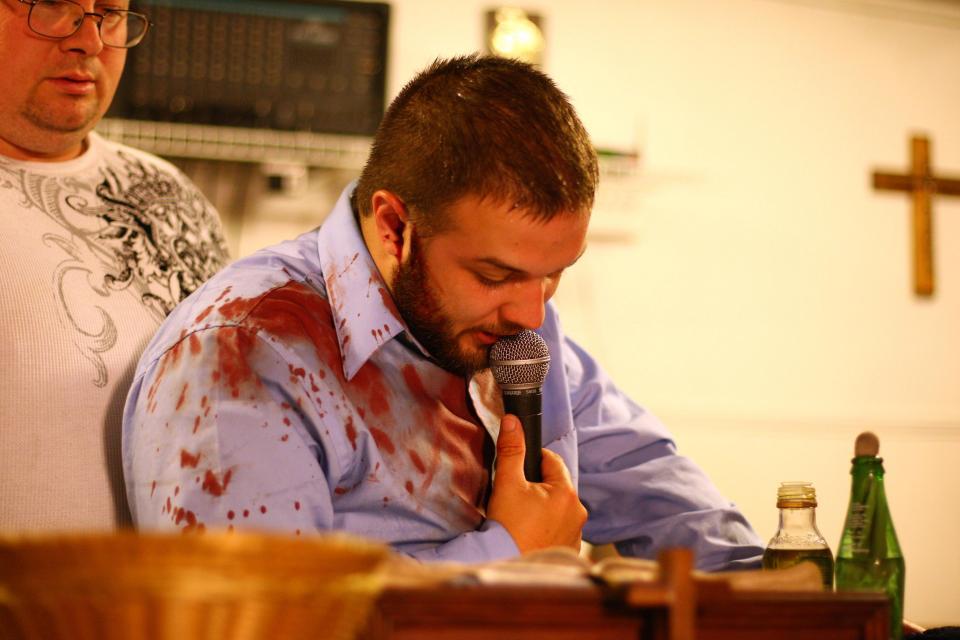 They’re not called snakes for nothing, and they are not used figuratively to speak of betrayal and treachery if they’re such innocent angels. A controversial American pastor found the truth the hard way. His use of a snake in a bizarre service in Kentucky almost cost him his life as the reptile had more “action-packed” ideas other than being used as mere “props” for the sermon, and ended up biting the preacher.

A video captured the horror moment the snake bit the pastor.

In the end, Cody Coots had to be carried out of the Full Gospel Tabernacle church horrifyingly drenched in his own blood from the snake’s attack. His church is only one of the few remaining such churches still allowing the ancient snake-handling in their services.

The even more strange thing is Coots’ reaction after being almost fatally bitten by the reptile. After the pastor collapsed on the ground, the first thing he asked is to be taken to the mountaintop because he believes it is God no less who will “judge whether he should live or die.”

Good for him that a more rational-thinking friend of his drove him to the hospital instead. A doctor who attended to Coots said the snake came close to severing the pastor’s temporal artery which would have certainly killed him.

The friend made the right decision to defy the pastor’s bizarre wish to be brought to the mountaintop instead of being rushed to the hospital. The friend shared: "Most people bit in the face are dead in five, ten minutes. I mean, his own daddy got bit in the hand and within seven minutes was dead."

The other odd thing with Coots is that his father, Jamie, then 42 years, was killed when a rattlesnake also bit him in an eerily similar ritual back in 2014. It seems the son did not learn a lesson from his father’s senseless death as he still preferred to perform the same death-defying act in the church service.

Such bizarre service is “inspired” by the biblical verse in Mark 16:18: "They will pick up serpents, and if they drink any deadly poison, it will not hurt them."

The scary scenes of the service where Coots almost got killed for his “religious devotion” - or “reckless insanity” depending on one’s perspective- were filmed as part of a new documentary entitled My Life Inside: The Snake Church.

The two-part documentary follows Coots and documents his recovery from the bite and also records his emotional and spiritual journey as he “re-evaluates his life and faith in the wake of his brush with death.”

Of course, to critical minds, it remains a question how much of the film is real and how much could possibly be “staged” for dramatic effect- a snake, or snakes literally and figuratively, after all, played a huge part in the documentary.

THOU SHALT NOT TEMP THE LORD THY GOD! IF GOD WANTED YOU TO PLAY WITH SERPENTS HE WOULDNT HAVE SENT HIS SON TO SAVE YOU FROM THE SERPENTS. SNAKE HANDLING IS SATANIC!

these stupid white-trash are a disgrace to my race.

Very smart people have been known to dismiss obvious facts when those facts cannot be easily fit into their faith. Sad really.

I don't think the Lord was with that preacher that day! I think maybe he needs to take a hint and worship the Lord in a better way. Anyone else think about the movie deliverance?

Whether they are snake handlers, the Pope, Billy Graham, Mormons, the pedophile network of the Catholic Church, or just your average 'Mom and Pop', CHRISTIANS ARE ALL INSANE!! They are the most threatening, dangerous individuals on the planet.