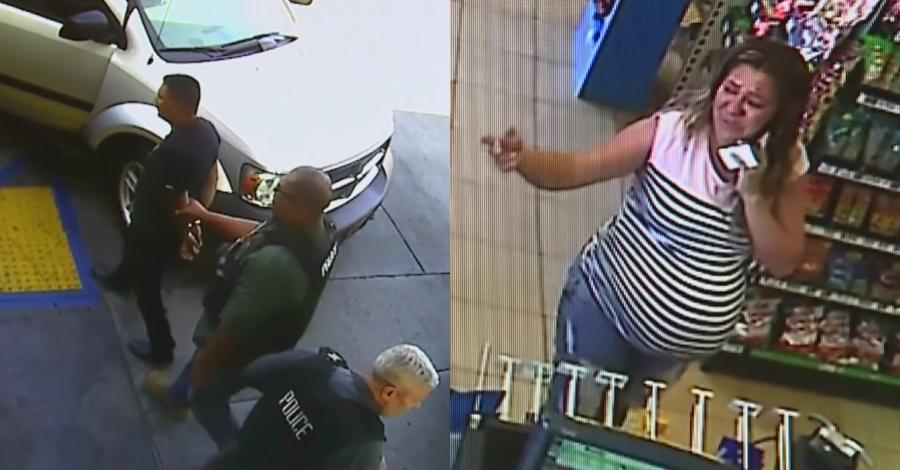 Maria del Carmen and her husband Joel Arrona were on the way to the hospital for a Cesarean section that would deliver their fifth child. The couple had made a stop at a gas station, and that is when they were approached by two Immigration and Customs Enforcement SUVs.

The mother of five said her husband was taken away by ICE agents - He's an illegal immigrant. She was forced to drive herself to the hospital and is now upset that her husband was not there for their child's birth. "I feel very bad right now," del Carmen told local news CBS2.

Del Carmen recounted how they were asked to show their identification and she complied with the federal agents, but her husband said he didn't have his ID on him. The agents then asked Arrona to step out of the vehicle while they searched it for weapons and handcuffed Arrona before taking him away.

"My husband needs to be here," del Carmen said. "He had to wait for his son for so long, and someone just took him away." She also said the family is getting an attorney for her husband who is in the U.S. illegally. California's habit of rewarding illegal immigrants with state ID's and driver's licenses only de-incentivizes legal immigration. Why would you go through the lengthy process and vetting of legal immigration when you can get a state issued ID, state assistance, driver's licenses, and even buy homes on credit without being a U.S. citizen?

The proof that sanctuary cities only make things worse for immigrants is this very situation. With California incentivizing illegal immigration, those illegals don't feel the need to become legal citizens then when they get caught it's everyone else's fault but their own. If they had time to have five children, certainly Arrona had time to become a legal resident.

ICE issued the following statement on the matter:

"ICE continues to focus its enforcement resources on individuals who pose a threat to national security, public safety, and border security. ICE conducts targeted immigration enforcement in compliance with federal law and agency policy. However, ICE will no longer exempt classes or categories of removable aliens from potential enforcement. All of those in violation of the immigration laws may be subject to immigration arrest, detention and, if found removable by final order, removal from the United States."

Within minutes of this article's completion, news broke by The Daily Caller that the man who ICE agents arrested (Arrona) was wanted for murder and had an outstanding warrant for his arrest.

you can bet that this will turn out to be a publicity stunt as they normally don't even deport criminal illegals….this is just to get a ruling against ICE.

that family will not even miss one welfare payment and the hospital visit is via the U.S. taxpayer and their forced payments to Obamacare so that the rich can have domestic servants and so they can keep their rental rates as high as possible

want to bet he also has other kids with other women??? And those women are also on the welfare system…….

We need more of this, only 4 million more illegals to go in Commiefornia!

THANK YOU, ICE…. deport the mother and kids too.

by the way, the man also had a homicide warrant in Mexico. Epic

Just what we need, ignorant non English speaking peons to breed prodigiously in our country. The bugmen have to feel superior to something and this trash fulfills that bill

Wanted in 3 murders. Fed to the USA. Been here Before Trump.