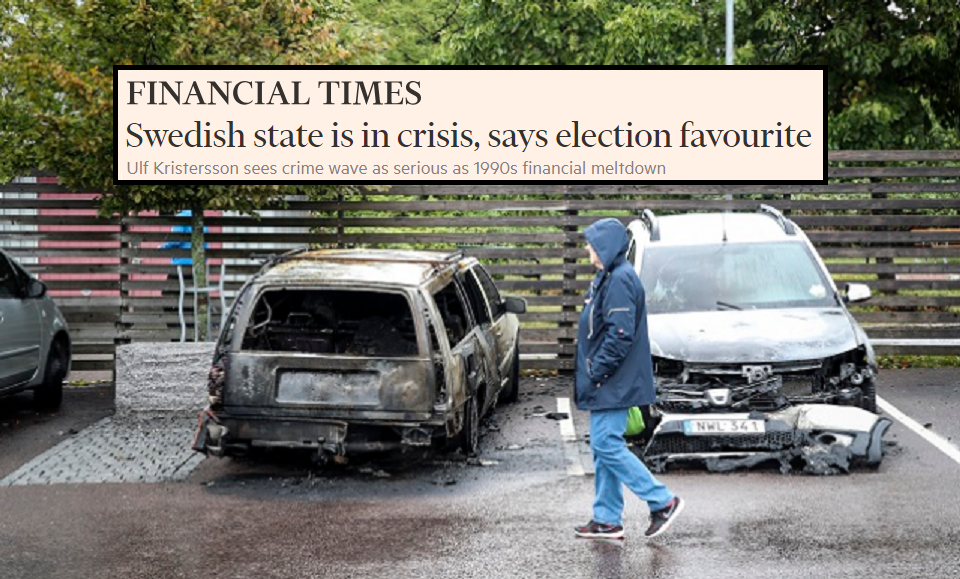 Sweden saw further arson attacks over the weekend as the European press starts to worry about the outcome of their national elections that are three weeks away. The Scandinavian nation is set to take a hard right turn due to its descent into an unending abyss of violence and crime.

It was about 18 months ago, in February of 2017, when US President Donald Trump stated in his now infamous speech: “Look at Sweden, they took in so many….” and the MSM ridiculed him for it.

The US New York Times changed its tack a few months ago, and today the UK’s Financial Times did the same, with a headline that was quite clear: “The Swedish State Is In Crisis.”

Yes, one of the election favourites, Mr Ulf Kristersson of the centrist Moderates party, who’s polling neck and neck with the right-wing Swedish Democrats, claims that Sweden was paying the price for 20 years of “very unsuccessful integration policies.”

He admitted that the right-wing Sweden Democrats have rightly captured the mood of the Scandinavians at the moment and they are therefore leading most polls, to the surprise of many European onlookers who never assumed Sweden would turn right so hard.

Related coverage: <a href="https://thegoldwater.com/news/33468-Sweden-Citizens-Now-Worry-As-Much-About-Crime-As-Peru-Mexico-Or-Brazil">Swedes now worry as much about crime as Mexicans or Brazilians</a>.

Mr Kristersson: “When voters are discontent, don’t blame them. We have the obligation to show that the state can do the stuff that they want us to do. Right now, we rather prove that politics can’t do what it should do.”

Sweden, long seen as one of the world’s happiest, healthiest and most successful countries, has been rocked by crime, shooting, grenade attacks and, as of late, arson attacks by youth gangs setting cars on fire.

And, allow us to quote the Financial Times here (before Twitter bans me for saying it) “arson attacks on cars in suburbs with a heavy immigrant population in Stockholm, Malmo and Gothenburg.”

The last event saw 100 cars being damaged in a garage in the Gränby neighborhood of Uppsala, just before 2:00 this Monday morning.

Mr Bosse Eriksson from Uppsala's emergency services: "It was two cars that were burning, but the garage contained around 100 cars which have been damaged to a greater or lesser extent by the heat. The fire was contained in the garage the whole time."

One more country swings right…. has the left won anything lately?

Sweden has already lost the battle. With the numbers of rapeugees that flooded in, the true Swedish have zero chance at holding the majority. The ones flooding in don't even take time off from purging out kids while they are in the camps unsure of their future! Well with 6-8 kids per couple vs 1-3!! Not much advanced math to figure out.

Not down to precise specifics, but in a general sense, this was predicted back about 2013/2014. I also recall years ago when Malmo was a no-go area, and in lockdown and Police declared it a no-go area for them too. Then when Merkel made it official she was going to open her borders to the stone age savages, the thinking was all she had to do was look over the fence at Sweden as a guide to her decision making?? but we know what happened, and is now following the path to the inevitable destruction of Germany in the path of Sweden's clear warning of the path not to take. The path may change hind sight, but we can only wait and see……

just a small correction, Gränby lie in the city of Uppsala

Thanks for the correction, Johan.