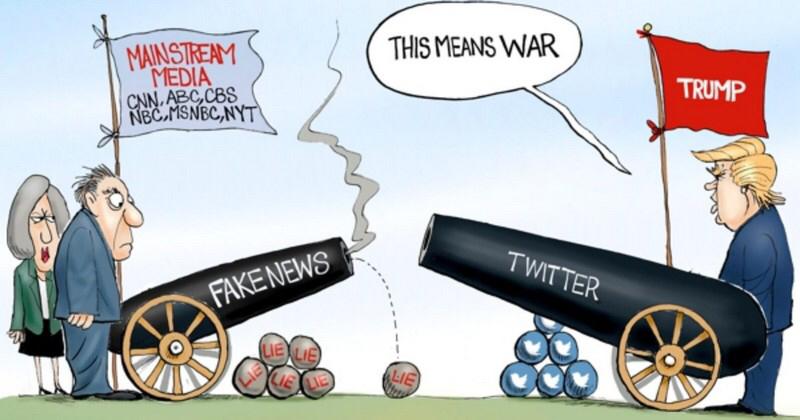 Liberal Media’s Hatred of Trump Is Only Hurting Themselves

In 2016 when Donald Trump secured the Republican nomination, and the general election was underway, New York Times media columnist James Rutenberg began with a question:

“If you’re a working journalist and you believe that Donald J. Trump is a demagogue playing to the nation’s worst racist and nationalistic tendencies, that he cozies up to anti-American dictators and that he would be dangerous with control of the United States nuclear codes, how the heck are you supposed to cover him?”

Quoting an editor who called Hillary Clinton “normal” and Trump “abnormal,” Rutenberg said “normal standards” didn’t apply. He began by saying that “balance has been on vacation” since Trump began to campaign and ended by saying that it is “journalism’s job to be true to the readers and viewers, and true to the facts, in a way that will stand up to history’s judgment.”

Dean Baquet, the Times’ executive editor, told an interviewer the Rutenberg article “nailed” his thinking and convinced him that the struggle for fairness was over.

“I think that Trump has ended that struggle,” Baquet boasted. “I think we now say stuff. We fact-check him. We write it more powerful that it’s false.”

Nearly every prominent news organization demonized Trump and endorsed Clinton. This was and is a disgraceful chapter in the history of American journalism.

Even when confronted with proof of falsehoods by the media, there has been no change in behavior.

The latest low moment in journalism involves more than 300 newspapers who wrote editorials denouncing Trump’s attacking the news media as “the enemy of the people.”

The project initiated by the Boston Globe encouraged newspapers across the country to stand up for press freedom after Trump called journalists “horrible, horrendous people” at recent rallies.

“This relentless assault on the free press has dangerous consequences,” the Boston Globe wrote. “We asked editorial boards from around the country – liberal and conservative, large and small – to join us today to address this fundamental threat in their own words.”

They insisted they were joining together to protect the First Amendment and freedom of the press. The effort looked like self-interest masquerading as principle.

True to form, most of the papers expressed their hatred for President Trump and some went so far as to extend the contempt towards his supporters.

Nancy Ancrum, the editor of The Miami Herald, told Fox News her paper joined the effort without any hope of changing the minds of Trump supporters because “they are just too far gone.”

Can you imagine - 63 million Americans just written off because we disagree with the liberal media ideology?

<blockquote class="twitter-tweet" data-lang="en"><p lang="en" dir="ltr">hey Deplorables I don&#39;t know how to break this to you but your president is a low-grade fucking moron who is too fucking dumb to understand that committing crimes is against the law and you&#39;re a fucking moron for worshiping him. oh wait, I guess I do know how to break it to you</p>&mdash; Jeff Tiedrich (@itsJeffTiedrich) <a href="https://twitter.com/itsJeffTiedrich/status/1030901396479123462?ref_src=twsrc%5Etfw">August 18, 2018</a></blockquote> <script async src="https://platform.twitter.com/widgets.js" charset="utf-8"></script>

The media refuses to see their destructive role in the war with President Trump. They show no remorse over the relentless hostile coverage of Trump and the damage it is doing to the nation.

Studies show that 90 percent of TV news coverage is negative. The Times, Washington Post and CNN, among many others, are addicted to Trump hatred as if it is a drug.

The lack of balance permits little to no coverage of his achievements, of which there are many.

How many people know that the employment records have been shattered by the jobs boom unleashed by Trump’s policies?

The statistics mean millions of people are getting a chance at the American dream. Why is this not newsworthy?

When it comes to Trump, nothing is ever good enough.

Having a preconceived opinion that he is unfit to be president, newsgroups ignore or distort the facts that contradict their view of him.

While the media manipulation does hurt Trump’s popularity, there is an ironic impact: The skewed coverage is doing more damage to public trust in the media.

A Gallup/Knight Foundation survey of 1,440 panelists found adults estimating that “62 percent of the news they read in newspapers, see on television or hear on the radio is biased” and that 44 percent of “news” is inaccurate.

Among Republicans and GOP-leaning independents, an astonishing 92 percent distrust the media, as do 53 percent of Democrats.

Two-thirds of those who believe there is false news say it usually happens because journalists “have an agenda.” This distrust is not limited to Trump supporters.

These percentages reflect a crisis of confidence in the press.

A Gallup survey three years ago found that 40 percent trusted the media; two years ago it declined to 32 percent. Now, look where they are.

Instead of examining their conduct, the media has increased their hatred, apparently believing that screaming louder and longer will lead the public to hate Trump as much as they do. This only drives them closer to him.

If he is as bad as they make him out to be, why do they have to lie? The truth should suffice.

I don’t understand the media fixation on Obama. The list of Obama failures is beyond measure. He was and remains the worst President we’ve ever had. His objective was to bifurcate and destroy America, and he damned near succeeded. The media has picked up where he left off.

To the liberal biased media, you best get on board because Trump is on fire. He is making America great again.

The MSM is nothing but Propaganda. I don’t believe a word they say. I get my news from the President. Keep these articles coming. The public has a right to know what liars they are.

History will reflect back on this time as the election that wasn’t supposed to happen according to msm and that the msm was working hand in hand with our corrupt doj & fbi to unseat a duly elected President. Maybe it will get coined the mueller coup?

Just bc they are the press it does not make the right. The #freepress is supposed to be free to REPORT… Not make crap up

msm is truly not only the enemy of the people, their the enemy of the world! Proven by the fact they lied to the American people in order to start two false wars that killed millions! Their owners and their corrupt reporters should be on trial for war crimes!