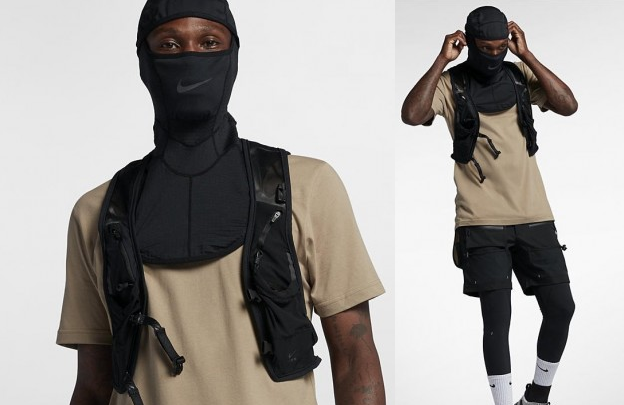 UK - Amid London Crimewave, Nike Headgear For ‘Fashionable Thugs’ Sells Out (No Joke)

There was a shooting in a London tube station yesterday evening during which three people were wounded. This weekend saw a mass stabbing by 30 youths which left 2 of them ‘disembowelled’. The British capital London is going through such a crime-wave that it has overtaken New York for the very first time in recorded history as to the number of murders (mostly through knife crime).

In this environment, Nike thought it wise to promote its newest headgear which looks like it comes in handy if you want to fashionably rob or stab someone and not get recognized. The $100 item sold out in record time (we’re not kidding).

The NikeLab NRG Berrylium Balaclava x MMW got a lot of reaction on the web, certainly when someone remarked that the straps tied to the headgear are perfect for fitting your knife or gun.

“First we had Puma putting on "Trap House" promotion in London. Now we got Nike using a black person to model a balaclava with straps and pockets. It's blatant that these companies are trying to cash in on the youth violence in London.”

Another stated: “This is a disgrace Nike marketing Gang Culture a £70 Balaclava. Knife crime is out of control, especially in London. Gang Culture is becoming out of control. This is disgusting gang culture fashion for profit. I can’t believe this is happening!”

Related coverage: <a href="https://thegoldwater.com/news/34419-UK-Londoners-Say-Enough-And-Gang-Up-On-Teenager-With-Huge-Knife-Video#34422">Londoners say ‘enough’ and gang up on teenager with huge knife (Video)</a>.

Another Londoner was outraged: “Are Nike having a fucking laugh with this? As if the little scum bags that roam the streets with their hoods up on their North Face jackets needed anything else. ‘Why not get a Balaclava with a handy pocket for your knife.”

Seeing the online reaction, Nike removed the product from their website as a spokesperson countered: “These products were part of a wider Nike Training collection, styled on different models and available in multiple markets around the world. We are in no way condoning or encouraging the serious issue of criminal and gang culture.”

Lol. Meanwhile americanized retards will keep vowing for how great capitalism is.

Fuck commies, but fuck that capitalist cock-suckers too.

Where ever there are dindu's your society and culture is fucked! Africa was a shithole and still is a shithole.

Not buying Nike ever again, shame on them for making masks for criminals