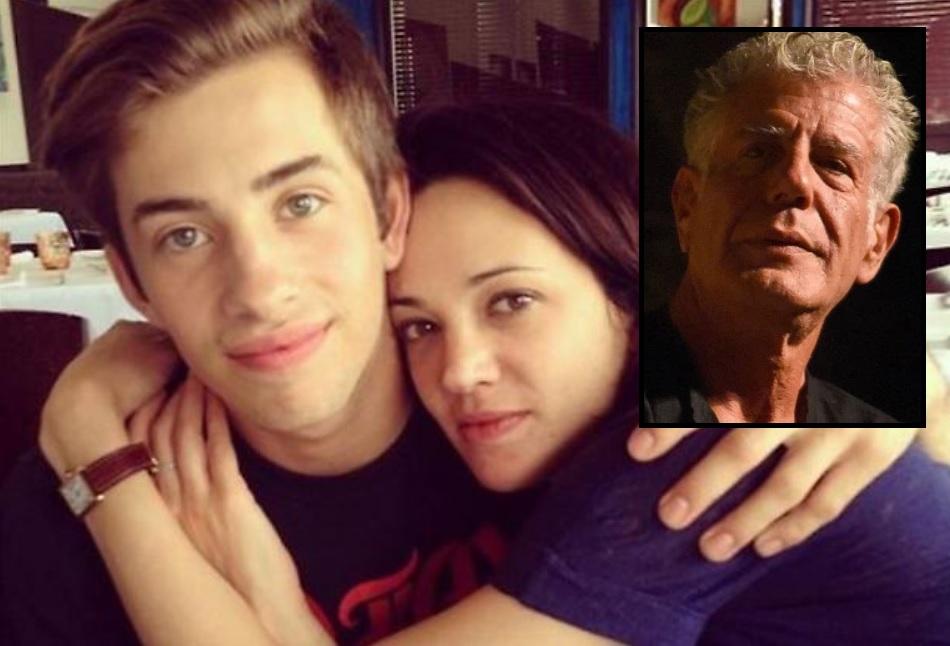 The woman who accused Hollywood Producer Harvey Weinstein of raping her and became a figurehead in the #MeToo movement, Asia Argento, has now been exposed for not only raping a minor but then paying off the victim $380,000. Argento was the ex-girlfriend of Anthony Bourdain and was dating Bourdain at the time she sexually assaulted a 17-year-old boy.

Now, the actress has come forward to blame the payoff on her late boyfriend claiming that Anthony Bourdain told her to pay off the boy to avoid "negative publicity." Actor and musician Jimmy Bennett accused Argento Sunday of dismissing his chaperon, loosening him up with alcohol, and then taking him to her hotel room where she performed oral sex and then climbed on top and raped him.

Argento has finally decided to come forward Tuesday and respond to the allegations. Her response is very telling and what is even more damning is the alleged photograph that shows her and Bennet in a "post sex" picture laying together shirtless in a hotel bed. The photo was allegedly what the $380,000 was meant to pay for, but a copy of it has been seen by TMZ.

The Italian actress publicly accused Weinstein of raping her starting off the #MeToo movement which encouraged more women to come forward with similar accusations of abuse against the Hollywood mogul. Her statement read, "I am deeply shocked and hurt by having read news that is absolutely false. I have never had any sexual relationship with Bennett. Bennett knew my boyfriend, Anthony Bourdain, was a man of great perceived wealth and had his own reputation as a beloved public figure to protect."

"Anthony insisted the matter be handled privately and this was also what Bennett wanted. Anthony was afraid of the possible negative publicity that such [a] person, whom he considered dangerous, could have brought upon us. We decided to deal compassionately with Bennett’s demand for help and give it to him. Anthony personally undertook to help Bennett economically, upon the condition that we would no longer suffer any further instructions in our life."

Attorney Ben Brafman had a thing or two to say about the allegations against Argento and her response to them. "This was not simply a matter of a woman who made a false allegation of being outed as a liar," Brafman said. "This was a voice who had portrayed herself as a victim being exposed as someone who had been able to fool all the reporters who interviewed her, and all the people who looked at her as a victim, when in truth she was a brazen fraud if the New York Times story is true."

she is a player , that is a puppet, Anthony was going to speak the truth of her.

Thanks for warning her?

typical roastie. blame the dead bf she drove to suicide who can't defend himself anymore

i get sexually harassed every day and I like it.﻿ ;)

You guys still yhink Bourdain killed himself? Get real….

You guys still think Bourdain killed himself? Get real….