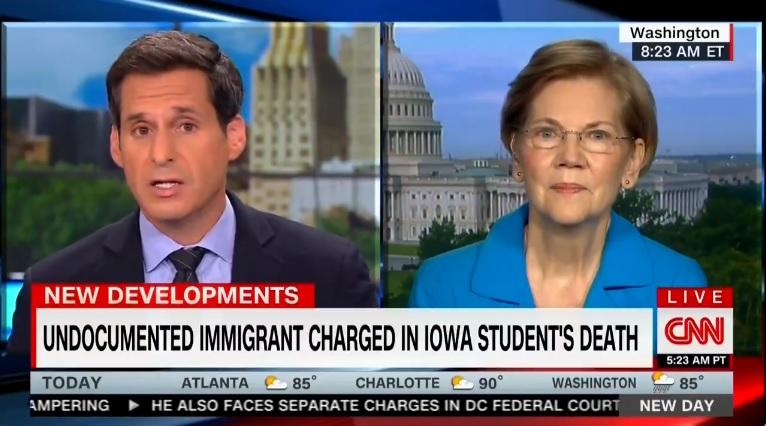 The Democrat Senator Elizabeth Warren appeared on CNN Wednesday in an attempt to steer the public's attention away from the very real problem of having an unsecured border that is taking the lives of American citizens and divert it to her own party's political agenda.

Related coverage: <a href="http://thegoldwater.com/news/34738-MSNBC-Criticizes-Media-Talking-About-A-Girl-In-Iowa-Video">MSNBC Criticizes Media Talking About ‘A Girl In Iowa’ (Video)</a>

This tactic is straight out of the Democrat and liberal agenda's playbook which seeks to divert attention from the real problem and take a moral high ground so that their own political agenda appears more virtuous. Warren even goes so far as to say that people should be focusing on "real problems", implying that the violent death of an American citizen is not a so-called "real problem".

Warren's despicable statement shows that she cares more about undocumented immigrants and their rights than American citizens and their lives. Warren attempts to minimize the tragic murder of the young, beautiful college student Mollie Tibbetts and instead of confronting the reality that hardened criminals are being allowed into the country illegally she tries to virtue signal by telling the viewers that they should care more about criminals, who are not citizens, being separated from their children, even though when an American citizen is arrested, they are separated from their children.

Other mainstream media outlets such as Time and MSNBC are even pushing the political narrative that Mollie Tibbetts death is simply being used as political fodder. I would say that Time is right, her death is being treated as fodder but not by conservatives or Republicans but by Democrats like Elizabeth Warren. Warren should feel ashamed of herself, how do you think the Tibbetts family feels when they hear Warren say that their daughter's death is not a "real problem" and that criminals who aren't even American citizens being separated from their children when they are arrested are somehow more important?

The words and thought process of Elizabeth Warren are sick and twisted and do not represent how the majority of good, law-abiding, American citizens feel. Warren's statement only reflects the opinions of a career politician who is so insulated from the real world that she can't even understand that her own words are shameful.

Related coverage: <a href="https://thegoldwater.com/news/13071-Illegal-Alien-Who-Gunned-Down-Kate-Steinle-Gets-Not-Guilty-Verdict">Illegal Alien Who Gunned Down Kate Steinle Gets Not Guilty Verdict</a>

The problem is simple. Democrats want open borders which means more violent crimes, rapes, drugs, and murders, while the average American citizen, especially those who have been directly affected by illegals, understand that the only way to stop America from becoming the next London is to secure the borders. Most people in California, a sanctuary city, have been impacted by the influx of illegal aliens. Whether it is by being in a car accident where the other driver was an illegal alien with no insurance and fled the scene, or whether they were the victim of another crime.

Some Californian's have even lost their lives due to an illegal alien who never should have been allowed in the country such as Kate Steinle, a young woman shot and killed by an illegal alien. The political elite of California who is pushing the liberal agenda of open borders and sanctuary cities are so insulated from the day to day life of an average Californian that they don't understand they are quickly losing relevance.

Even the legal immigrants in California understand that illegal immigration is a problem and soon Californians will stop supporting the ignorant politicians who place more value on people from other countries than they do on the lives of their own citizens. I'll leave you with a quick clip from California State University professor Victor Hanson giving his perspective on illegal immigration from ground zero.