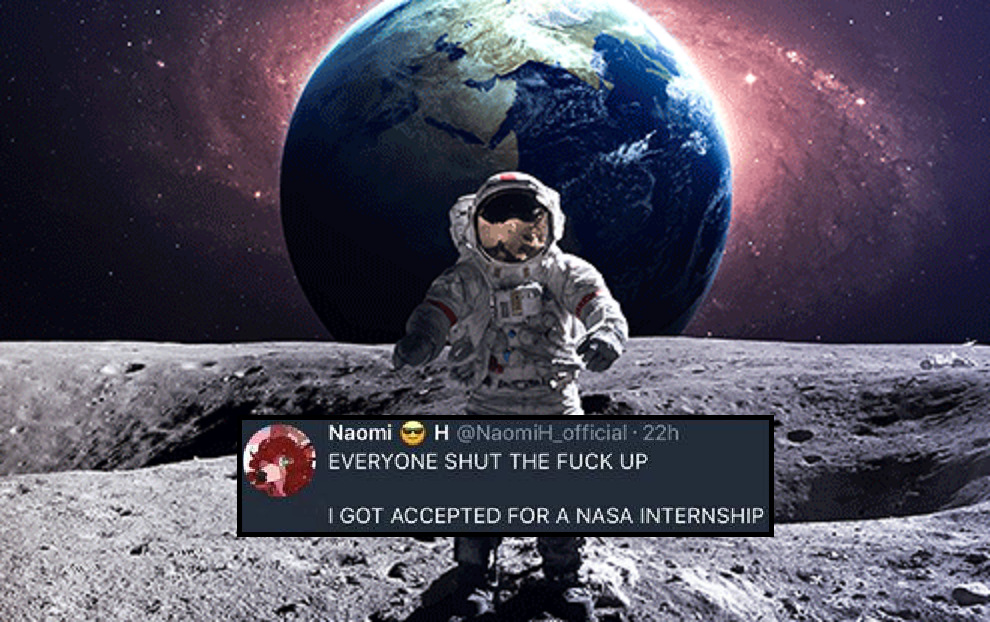 A young woman known as Naomi H lost her internship at NASA after expressing her joy over landing a position at the space agency a bit too exuberantly in a vulgar tweet.

The situation worsened after she also insulted a director of the National Space Council in the same Twitter rant. The tweets have since been removed, but some screenshots still circulate on the internet.

When Naomi was told that she was accepted with her application for an internship at NASA, she immediately went to Twitter to share the news. In doing so, she did not shun vulgar language. "Everyone shut the fuck up. I got accepted for a NASA internship. "

A man she didn’t know replied with ‘language…..’ after which she once again enthusiastically continued. "Suck my dick and balls. I work at NASA."

The replier however, known as Homer Hickam, then stated: "And I belong to the National Space Council that oversees NASA."

The situation got completely out of hand when some friends of Naomi decided to get involved. When they saw that Naomi was tapped on her fingers, they decided to come to her aid. According to Hickam, they sent him "a lot of unfriendly things."

It was those ‘helpful’ tweets meant the death blow to Naomi's career at NASA as her friends used the NASA hashtag, allowing the organization to follow the entire exchange.

After seeing Naomi's inappropriate use of language and the abuse of her friends, it was decided to withdraw her internship.

Mr Hickam declared afterward that he had nothing to do with the decision. If it were up to him, Naomi would get a second chance. Meanwhile, the woman has apologized to him, to which he also apologized. "After I've talked to her, I'm sure she deserves a position in the space industry and I do everything I can to give her a place that's better than the one she lost."

According to her latest tweet, Naomi has decided to take a "break" from Twitter for a bit.

She should have watched the movie October Sky. She would have known then that Homer Hickam was one of the "Rocket Boys" and at the end of the movie said where his career took him.

"and I do everything I can to give her a place that's better than the one she lost."

Way to go, being a cunt to people is apparently brave and is to be encouraged.

This situation is living evidence of rising autism rates in the past decades.

She’s a furry, they shouldn’t be allowed to have people jobs anyways.

Meanwhile,there is no punishment for the attorney general who cussed a streak, when discussing the Cody Wilson case, and the temporary restraining order he and his henchmen achieved. Even more amazing, nobody commented on the fact that a judge had issued a restraining order on all Americans, and didn't have the decency to notify them.

Usually, people learn to watch what they say in public before they enter the work force.

INB4 she gets offered some managerial position "overseeing" a research group, and subsequently takes credit for something the group discovered, while her only contribution was to stay out of the way and play candy crush.

If he gets her a job, then:

1) It's sad burden to place on the persons that have to work with the abusive and hateful woman.

Good to hear that furfags won't be yiffin' on Mars.