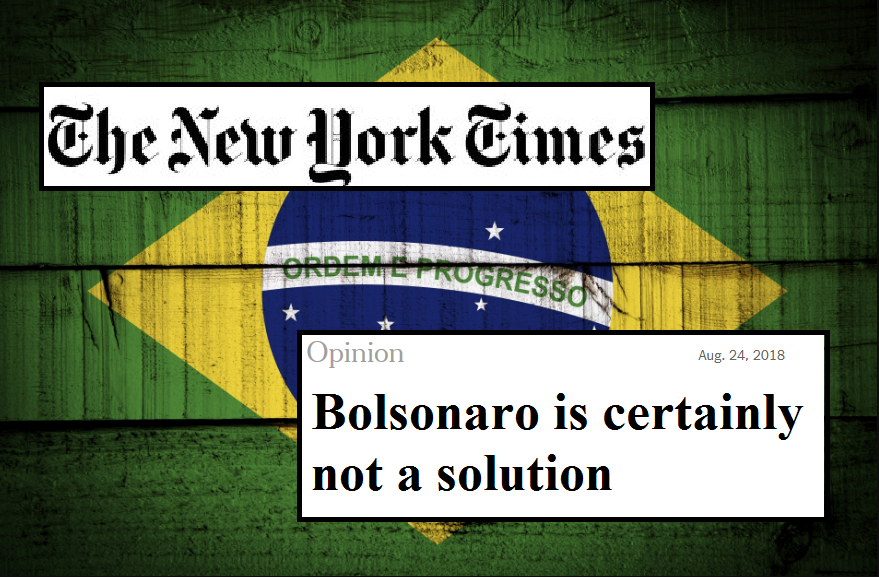 In the same week that the biggest newspaper in the world, the New York Times, lent its editorial pages for a blistering attack on the Brazilian democracy urging them to let jailed Presidential Candidate Lula from the Workers Party run and bypass its judiciary system (see our related coverage), today it published an editorial painting a very bleak picture of the leading candidate, Mr. Jair Bolsonaro.

Mr. Bolsonaro, who is the hope of a younger generation in Brazil, is slammed as a candidate by a newspaper that promises always to be ‘free and fair’.

Quotes used to try and influence the US readership are meddled with bleak poetry: “Mr. Bolsonaro has glorified Brazil’s sinister authoritarian past. He is tempting Brazilians to return to a dark chapter in their history.”

Although the author mostly goes on to list the ‘shady’ details of whatever mistake Mr. Bolsonaro has made during his decades in Brazil’s parliament, even she cannot bypass the fact that he is highly popular with the younger generation, stating: “He has managed to project an image as both a conservative leader who wants to bring back “family values” and a refreshing figure who is radically opposed to all that is politically correct (60 percent of his followers are young people).”

“He emerged as a front-runner because a significant number of Brazilians tired of violence, of the chaos of corrupt politics and of the inroads made by the progressive left support his hard-line conservatism and maverick stances. He has an appealing formula for a troubled country: simple solutions to complex problems.”

She concludes her piece by stating that Mr. Bolsonaro “is a symptom of the widespread discontent in Brazil, he is certainly not a solution.”

In all, this now makes two editorials in one week where the New York Times lends its pages to people who are pro a candidate sentenced for corruption currently serving a 12-year prison sentence and against a candidate who is leading in the polls and who’s been described as ‘the Brazilian Donald Trump.’

Ms. Pires is not on her first editorial on the subject of Brazilian democracy even. Already in April of this year, she was granted an editorial in the NYT in which she decried the jailing of Mr. Lula and stated “Brazil could well follow the recent trend in other Latin American countries, where right-wing parties that stubbornly refuse to cut ties with their former dictatorships are now on the rise, enjoying the support of the growing evangelical Christian communities.”

If we didn’t know any better, we would accuse the New York Times of trying to meddle in Brazil’s election, but that would be illegal wouldn’t it?

Is criticizing a candidate meddling in an election?

If you do it repeatedly and try to steer them away from a certain party, I would say so yes. Certainly if you lend your opinion pages to leftwing analysts while the right leads the polls it becomes a bit suspicious.