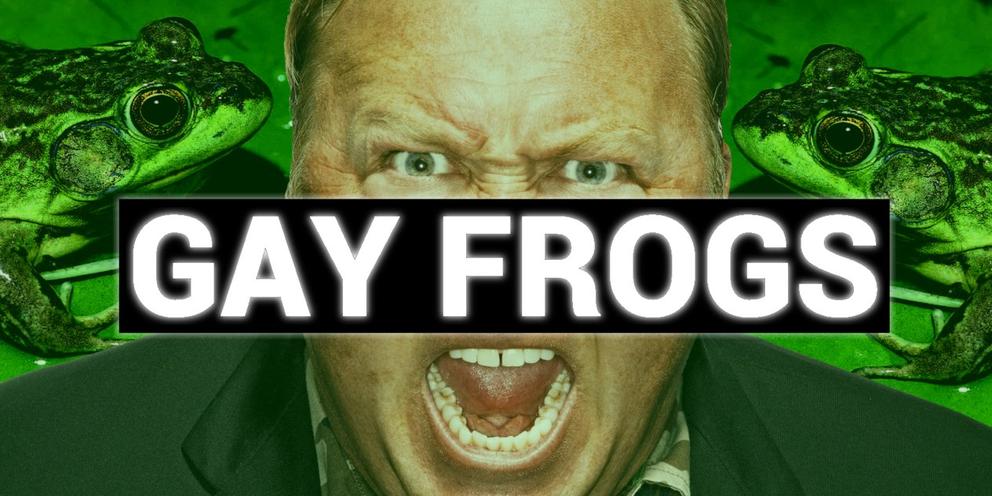 A lot of jokes are made at the expense of Jones related to the "frogs are gay" line. As it turns out, like much of Alex Jones, it's only partially disinfo (that's his schtick, throw in some truth sandwiched in bull). Yes, PCBs are feminizing frogs and other animals, there are related studies that show other industrial chemicals being pumped into our eco-system are also messing with our hormones and influencing sex differences. It's no secret and no joke that testosterone levels have been dropping swiftly over the past several decades. Sperm levels are even dropping. That said, it's still pretty funny that Alex "turning the friggin' frogs gay" Jones might have a taste for "tbabes."

This doesn't alarm me. What alarms me is how someone is invading his privacy

Did you ever use a truck stop bathroom ? they often have a stack of raunchy mags piled on the tank..You never know what you'll see but you peruse them anyway.. Who cares what he looked at on his own time or taking a crap at a truck stop.

Who is bashing Alex Jones? I am just amused that a guy who has spoken derogatorily of transexuals and gays and their "agenda" wanks it to "sexy shemales."

That is the ESSENCE of irony. It's pretty hilarious all in all.

Insatiable appetites gorging on their own puke, like a dog eating his own vomit.

Only high test alpha men are into trannies

Only high test alpha men are into trannies

only guys who are sick to death of FAT, UGLY WOMEN. at least the trannys care about their appearance.

with regard to Jones. that's pretty funny that he outed himself. i thought it was newsworthy just like i think it's newsworthy to out the gay priests.

You got this from the Anons on 8ch, then you advertise and sell our clicks for our own stuff we found already.

"You got this from the Anons on 8ch."

Do you actually contribute to 8ch or are you a lurker and sponge? As per me, I contribute. Information should be shared, information wants to be free. Aggregating and disseminating information is an admirable cause. I guess you feel you have some copyright on "the truth" but you don't.

"Stuff we found." You found it? You found it or it was found at a website that you frequent? Cuz if it's number 2 then you're in the same boat. Anon doesn't have a name. You are anon, I am anon, we are anon. You don't own this, I don't own this WE own this.