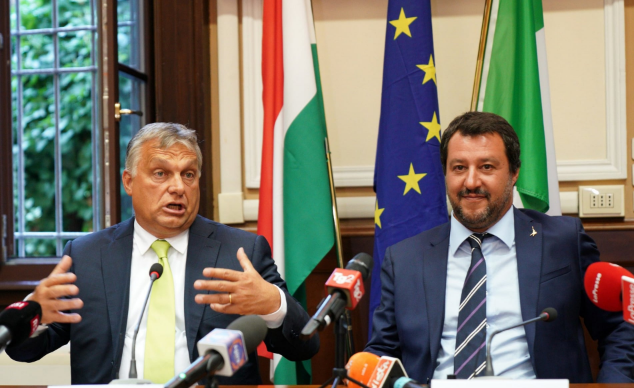 European leaders in Brussels must have cowered in fear as they saw the meeting between Hungarian Prime Minister Viktor Orban and Italian Interior Minister Matteo Salvini unfold in Milan, Italy yesterday. The two rightwing leaders are united in their anti-immigration policies and relentlessly bashing of the EU.

After a two hour meeting behind closed doors, they called for the creation of a pan-European anti-migrant alliance that would seek to prevent any further migration to Europe from besieged regions in Africa and the Middle East and would try and gain the upper hand in the EU Commission.

Mr Salvini was also quick to criticize French President Emmanuel Macron who had mentioned the pair yesterday (see our related coverage), stating: “President Macron who is at record low levels of popularity in his country, passes his time by giving lessons to foreign governments.”

“He has to first show his solidarity and open the border at Ventimiglia” (between France and Italy, red.) “He can even do that tomorrow.”

However, Mr Salvini's coalition partners from the populist Five-star Movement (M5S) reacted angrily to the meeting with Mr Orban.

Writing in the La Stampa newspaper, the Italian deputy prime minister and leader of the Five Star Movement, Mr Luigi Di Maio said that Budapest's refugee policy was too harsh: "Orban's Hungary is building barbed wire fences and refusing to redistribute refugees in the EU."

Sanity is rare these days.

Di Maio is a maile. Salvini is a man. Probably a faggot like Macron