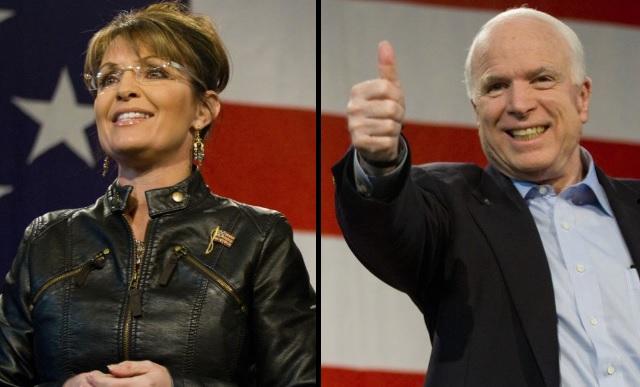 The running mate of John McCain during his run for the presidency in 2008 was Sarah Palin, the former governor of Alaska. Despite this close political and likely personal tie, Palin has been excluded from McCain's funeral. Palin was not only denied an invitation but told through back channels in no uncertain terms to stay away from the ceremony.

Carla Eudy, the McCain fundraiser confirmed that Palin had not been invited, it is speculated that the McCain family is behind Palin's barring from the funeral. The news was revealed on the 10th anniversary of McCain's announcement of his pick for Vice President.

Related coverage: <a href="https://thegoldwater.com/news/35132-Republican-Senator-John-McCain-Dead-At-81">Republican Senator John McCain Dead At 81</a>

When news of McCain's passing was announced, Palin said, "Today we lost an American original. Sen. John McCain was a maverick and a fighter, never afraid to stand for his beliefs. John never took the easy path in life — and through sacrifice and suffering, he inspired others to serve something greater than self. John McCain was my friend. I will remember the good times. My family and I send prayers for Cindy and the McCain family."

McCain was reported to have said he regretted choosing Palin as his running mate over Sen. Joe Lieberman, news that Palin described as a "gut punch." Palin may be in headlines over being barred from attending the funeral, but she isn't the only one who was told to stay away from the event. President Donald Trump was is also on the banned list to McCain's funeral.

Related coverage: <a href="https://thegoldwater.com/news/35405-John-McCain-Loved-then-Hated-then-Loved-by-the-Left-One-Evil-Vote">John McCain: Loved then Hated then Loved by the Left - One Evil Vote</a>

Despite the harsh comments from McCain regarding their campaign for the presidency, the Palin family told a source close to them: "Out of respect for Sen. McCain and his family we have nothing to add at this point. The Palin family will always cherish their friendship with the McCains and hold those memories dear."

McCain is set to be buried Sunday in Annapolis after several days of planned memorials and events.

I admire Sarah's unwillingness to be sucked into the negative void. As for me the kindest thing I can say for NoName is he is dead. Good. He was an awful man filled with lies and evil works. The world is a better place with his passing.

why is it everyone seems think he was the only held prisoner of that war he did nothing greater than other prisoners than the vets died over there .so why don't start telling all military that they are just as or greater instead of gushing over mccain.

Rest in piss McCain you killed more Americans and foreigners than most small time commies just like you.

McCain was a short man with the complex some get, if one crossed him or called him out he immediately crawled up their ass. I feel for his family but the man himself was a prick and seeming more traitorous as the day waned on. Maybe it was his tumor? But his military career is riddled with infractions that would have washed out any candidate without admirals for dads. From crashed aircraft to almost sinking a carrier and costing many lives and all we hear is hero pow blah blah blah. I feel for all pows but getting caught and doing propaganda radio announcements makes not the hero, busting your brothers out does!

Yah got to wonder……one day after announcing no more treatments. Usually patients last a week to maybe a month. Maybe no name prescription pilled himself. To have the establishment media who constantly calls light dark and vice versa or evil good and good evil show him love makes me want to run for the door.

Surprise a Left Leaning RINO did not want a Conservative at his funeral with his Liberal bud's.

Was there ever a Poll done to see if voters voted GOP in 2008 because of him or Her?

I'm willing to bet it would have show Her and not Him.

search for " John Mccain Exposed By Vietnam Vets And Pow's "

MCCAIN WAS A COWARDLY, UN-AMERICAN POS!