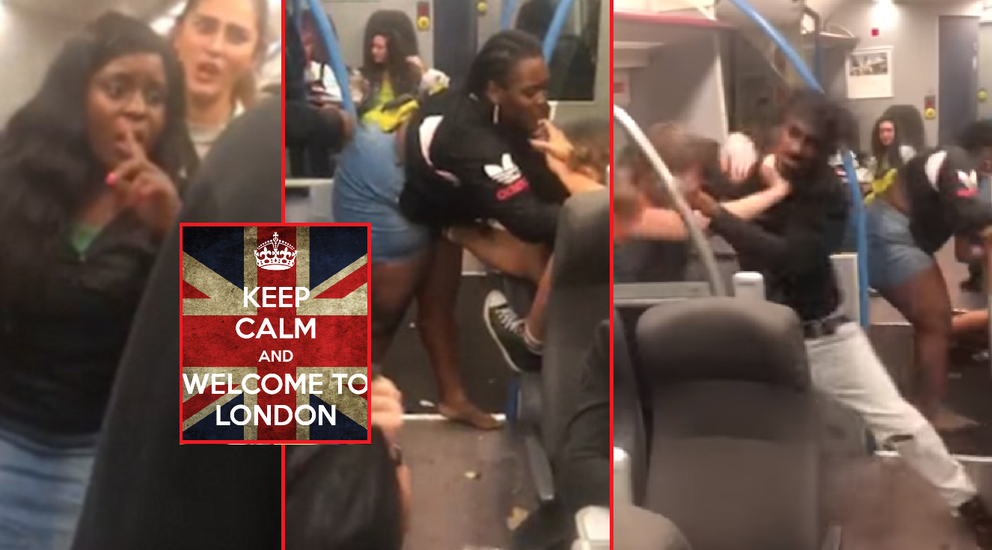 The British capital London continues to look as inviting as ever now that a new video surfaced today from a mass brawl on a train going from London to Birmingham between black and white youths over a ‘sandwich.’

We invite you to watch the video, there is some very educational language.

It features some fine English language phrases such as “don't make me take off my wig. I will punch you into next week!” and the ever useful “sit the fuck down and shut the fuck up.”

British Transport Police released a statement afterward: “We are aware of footage circulating on social media showing an assault on board a Chiltern Train. We believe it relates to an incident which took place on a train between London and Birmingham Snow Hill at 9.50pm on 27 August. An investigation into this incident is underway, no arrests have been made at this time.”

Commuters, by now apparently unfazed by the display (with two middle-aged men leaving the carriage rather than helping the victims) went on with their daily business.

The event took place at the end of the London Notting Hill Carnival which, according to London Mayor Sadiq Khan went by without a hiccup and according to social media commenters: “I dunno what London you were in but in my London they made 370 arrests, seized 69 weapons, had 30 officers injured, and had one stabbing. 'Safe' indeed.”

Mr. Khan meanwhile, said that extra policing would not be enough to stop the crime spiral the city has descended in. In a tweet today, he reminded everyone that: “policing alone will not solve violent crime, we need to relentlessly focus on prevention & providing opportunities for young Londoners. That’s why, despite Govt cuts, City Hall is investing in young people.”

Culture we should all aim to embrace.

notice that the cowardly white guy leaves instead of helping his white brothers. i can't wait for a nigger with his pants below his ass to attack me…. these savages are likely sub-human Haitians .