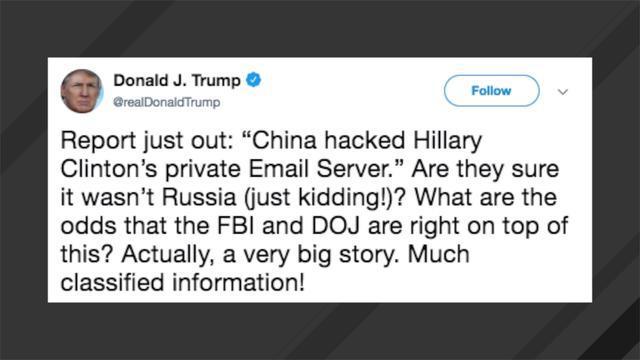 Hillary Clinton’s private server was hacked by a Chinese-owned company operating in the Washington, D.C., area.

Two sources that were briefed on the matter told The Daily Caller News Foundation that the server was hacked throughout Clinton's term as secretary of state and they obtained nearly all her emails.

According to the sources, the Chinese firm obtained Clinton’s emails in real time as she sent and received through her personal server.

The Chinese wrote code that was embedded in the server, which was kept in Clinton’s residence in upstate New York.

The code generated an instant “courtesy copy” for nearly all of her emails and forwarded them to the Chinese company, according to the sources.

<blockquote class="twitter-tweet" data-lang="en"><p lang="en" dir="ltr">Hillary Clinton’s Emails, many of which are Classified Information, got hacked by China. Next move better be by the FBI &amp; DOJ or, after all of their other missteps (Comey, McCabe, Strzok, Page, Ohr, FISA, Dirty Dossier etc.), their credibility will be forever gone!</p>&mdash; Donald J. Trump (@realDonaldTrump) <a href="https://twitter.com/realDonaldTrump/status/1034654816046329856?ref_src=twsrc%5Etfw">August 29, 2018</a></blockquote> <script async src="https://platform.twitter.com/widgets.js" charset="utf-8"></script>

Rep. Louie Gohmert, a Texas Republican, said at a July 12 House Committee on the Judiciary hearing that the Intelligence Community Inspector General (ICIG) found that virtually all of Clinton’s emails were sent to a “foreign entity,” He did not reveal the entity’s identity, but said it was unrelated to Russia.

According to a former intelligence officer with expertise in cybersecurity issues, Investigator Frank Rucker and attorney Janette McMillan with ICIG met repeatedly with FBI officials warning them of the Chinese intrusion. He spoke anonymously because he was not authorized to publicly address the Chinese’s role with Clinton’s server.

Peter Strzok was one of those FBI officials, who was then the bureau’s top counterintelligence official. Strzok never followed up on any of the information the ICIG provided him, according to Gohmert.

<blockquote class="twitter-tweet" data-lang="en"><p lang="en" dir="ltr">JW President <a href="https://twitter.com/TomFitton?ref_src=twsrc%5Etfw">@TomFitton</a>: The Obama Admin conspired with Clinton on her emails, so it is no surprise that Obama officials wouldn’t want to hold her accountable. The Trump Admin should find out what damage was done as a result of her illicit email practices.<a href="https://t.co/GH8f4EOO9o">https://t.co/GH8f4EOO9o</a></p>&mdash; Judicial Watch 🔎 (@JudicialWatch) <a href="https://twitter.com/JudicialWatch/status/1035252859116429312?ref_src=twsrc%5Etfw">August 30, 2018</a></blockquote> <script async src="https://platform.twitter.com/widgets.js" charset="utf-8"></script>

In the Judiciary Committee hearing, Gohmert mentioned that ICIG officials told Strzok and three other top FBI officials that they found an “anomaly” on Clinton’s server.

“The former intelligence officer TheDCNF spoke with said the ICIG “discovered the anomaly pretty early in 2015.”

“When [the ICIG] did a very deep dive, they found in the actual metadata — the data which is at the header and footer of all the emails — that a copy, a ‘courtesy copy,’ was being sent to a third party and that third party was a known Chinese public company that was involved in collecting intelligence for China,” the former intelligence officer told TheDCNF.

“The [the ICIG] believe that there was some level of phishing. But once they got into the server something was embedded,” he said. “The Chinese are notorious for embedding little surprises like this.”

“We do know the name of the company. There are indications there are other ‘cutouts’ that were involved. I would be in a lot of trouble if I gave you the name,” he told TheDCNF.

London Center for Policy Research’s vice president of operations, retired Col. Anthony Shaffer, told TheDCNF that Clinton’s server could have been hacked by a fourteen-year-old and left little trace.

“Look, there’s evidence based on the complete lack of security hygiene on the server. Fourteen-year-old hackers from Canada could have probably hacked into her server and left very little trace,” Shaffer said. “Any sophisticated organization is going to be able to essentially get in and then clean up their presence.”

A former consultant to the U.S. trade representative, Claude Barfield, told TheDCNF: “The Chinese were in the process of really gaining technological competence from 2009 to 2010. This begins to really take off in the early years of the Obama administration. The Obama administration was kind of late and there was this slow reaction about how sophisticated the Chinese were.”

All I can do is thank God that she is not our President.

She should be indicted.

Truly amazing, thank you for the great article Lexy.

Thank God this came out

old and overblown. Get some new stuff to report as factual news

I'm sure China isn't the only one who has them.