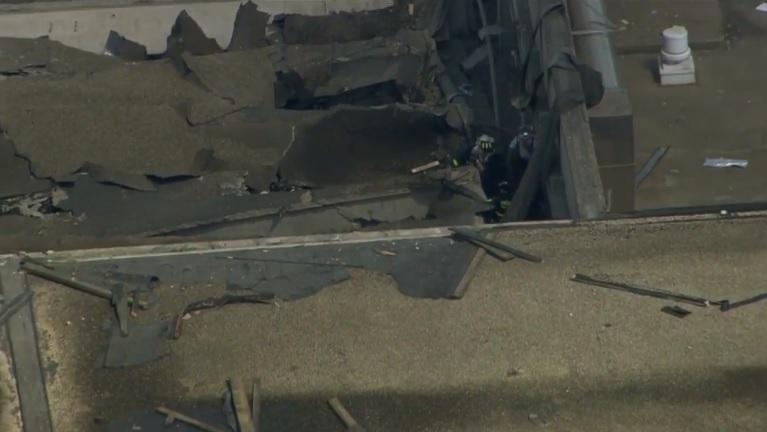 Ten workers were injured in an explosion at a far South Side water plant Thursday that left two of those workers trapped. It appears a methane leak is behind the explosion that caused the roof of a building at the water treatment center to collapse. Firefighters were alerted to the explosion at around 10:50 a.m. at the Calumet Water Reclamation Plant, according to Fire Commissioner Jose Santiago.

The Metropolitan Water Reclamation District of Greater Chicago said the explosion occurred at the plant's sludge concentration building. A Chicago Fire Department source told local news the explosion happened after workers using a blowtorch hit a gas line. Firefighters spent about 20 minutes freeing one of the workers who was trapped but a second was completely "buried and entombed" under thousands of pounds of debris.

Fire Department Chief of Special Operations Tim Walsh said the second trapped worker was freed by digging about six feet deep into the ruble and then tunneling another 40 feet horizontally. The second trapped worker's legs were pinned under massive concrete beams. In order to avoid having to amputate his leg, firefighters reached out to doctors at the University of Chicago trauma center. Paramedics were able to provide him with IVs and medication to treat his injuries caused by the intense pressure of the concrete.

It took about two hours for firefighters to free the second trapped worker. Deputy Fire Commissioner William Vogt said, "They did a phenomenal job." According to Walsh, the second buried worker suffered a broken jaw and a badly fractured leg but it was not amputated. He was airlifted to the University of Chicago upon being freed from the debris.

MWRD President Mariyana Spyropoulos said an investigation is underway as to the cause of the methane buildup. She also confirmed all ten workers were inside the building when the roof collapsed and not on the roof itself. The fire department said they are also investigating the cause of the explosion as well as the Office of Fire Investigations, the Chicago Police Bomb & Arson Unit, and the MWRD.