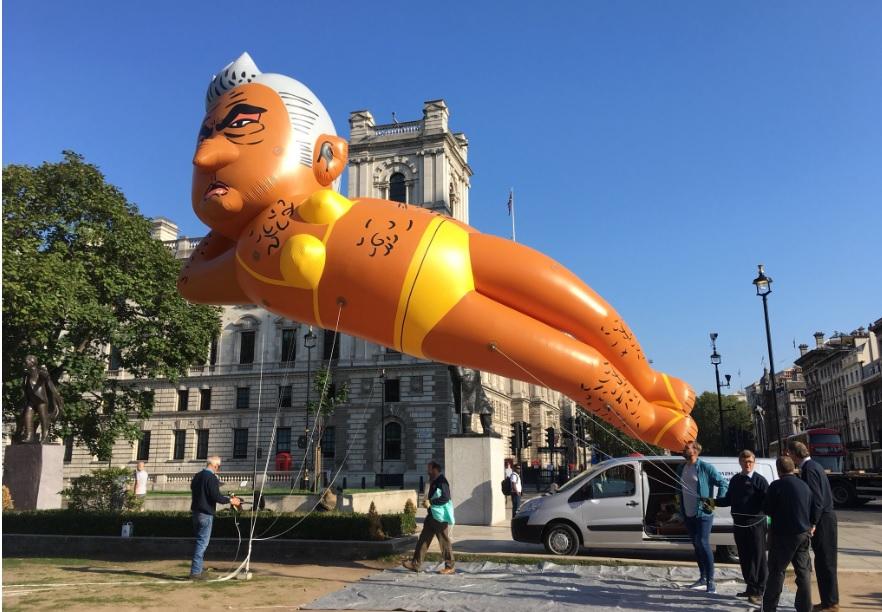 A giant balloon of London Mayor Sadiq Khan, 29 feet to be exact, was flown over London and was entirely paid for by crowdfunding. The balloon raised over $90,000 in a week, twice what the Trump balloon raised that flew during Trump's visit to the UK. After assembling the giant project, it's creators let it take flight over Parliament Square in Westminster.

The balloon's makers say they want to raise awareness to the rising violent crime levels in the capital city, and to protest the giant Donald Trump baby balloon that Khan allowed to fly in July. The campaign's organizer is a self-proclaimed free-speech advocate named Yanny Bruere.

Related coverage: <a href="https://thegoldwater.com/news/35534-UK-Khan-Balloon-In-Yellow-Bikini-Ready-Irritated-That-He-Mocked-The-US-President">UK - Khan Balloon (In Yellow Bikini) Ready - “Irritated That He Mocked The US President”</a>

"In light of the ‘Baby Trump’ balloon being allowed to fly over London during his visit to the UK, let’s get a ‘Baby Khan’ one and see if free speech applies to all and whether or not Mr. Khan and the London assembly will also approve this," Bruere said. "Under Sadiq Khan, we have seen crime skyrocket to unprecedented levels. People in London don’t feel safe and they aren’t safe, [there have been] 81 murders this year alone!"

Bruere also said he thought that many people don't feel that Khan represents them well adding, "I think a certain amount of respect should be afforded to the leader of the free world and the greatest ally the UK has – the president of America." The original inspiration for the balloon was a "Baby Khan" similar to the "Baby Trump" balloon, but the idea was scrapped in favor of a mature looking Khan in sunshine-yellow swimwear, a knock on his ban on "body-shaming" advertisements.

Khan seemed to take the balloon in stride saying, "If people want to spend their Saturday looking at me in a yellow bikini, they’re welcome to do so. I don’t really think yellow’s my color though." A spectator of the scene from east London expressed his unhappiness with the city's current mayor, "I think Sadiq Khan has been a terrible mayor for London. I’ve lived here for 25 years and the feeling of impending crime on the streets has never been worse."

I think this is going to get violent, just like SOuth Africa.

muslims follow a man who was a pedophile and forced himself onto a 7 year old , yet they choose to spread their brand of barbarism around the world.

Trump is right, as london sucks now after they brought in way to may muslims

Where is the blow up doll fucking this cuck faggot!